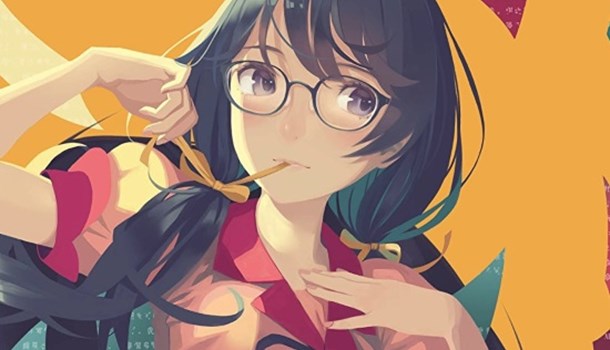 Imagine a world where something like Nekomonogatari (Black) could be on the required reading list for contemporary literature. Wouldn’t it be so much fun to be the lecturer on that course? Just plonk down a whole pile of NisiOisiN books and wait to hear your students try to form coherent discussions and essays from a book which spends more than seven pages on a rambling diatribe on the relative merits of groping your little sister’s breasts. If nothing else you’d be setting them up with pure gold for the psychology course in the next period!

For anyone who needs to be caught up the subject, under today’s microscope is the seventh volume of the English translation of NisiOisiN’s phenomenally successful Monogatari franchise. Chronologically the second tale in the franchise (thus far…) Nekomonogatari (Black) picks up the story as our lead, the quick-witted, silver-tongued and ultimate pervert Araragi reminisces about the events of the Golden Week holiday, which took place not long after the events of Kizumonogatari.

At its core, this is the story of how the “best girl” in the franchise, Tsubasa Hanekawa, came into contact with the cat apparition whom we encountered in Bakemonogatari (and subsequently became responsible for Seb’s second mortgage).

As ever though NisiOisiN isn’t in any rush to get to the meat of his story and therefore the heroine of our tale doesn’t actually enter the story for EIGHTY-FOUR pages in a 280 page light novel! (That’s almost exactly a third the way through statistics fans). That's a pace so glacial that only J R R Tolkien and George R Martin could rival it. It’s not exactly as if the main story is being set up in these pages either, instead these pages are almost entirely taken up by a duologue between Araragi and his younger sister Tsukihi which covers not only the aforementioned hands-meet-boobs interaction but also discourses on everything from romance to public holidays - all couched in more witty banter and pop-culture references than Joss Whedon could shake an Avenger at!

As you might expect given the previous novels and anime adaptations, this banter and referencing (though not the boob grabbing) carries through to the rest of the novel. This is very much the style you expect from NisiOisiN, so if you’re a fan you know what to expect. In the hands of a lesser author this would come off as unbelievably pretentious and dull but these books work almost entirely because of these rambling excursions as Nisioisn bounces gleefully between topics such as a kitten being placed on a pure caffeine diet (presumably based on whatever was on the TV in the background whilst he was working that day).

It’s a crazy way to write - cut apart all the sentences on any given page and you’d be hard-pressed to get someone to put them all back together in the right order, but in his hands, it just works. It’s also interesting to note how this compares to the anime, not just the adaptation of this work but of the franchise as a whole. The dialogue in the anime is blisteringly fast (out of necessity) and it’s easy to miss out on a lot that’s being said and the subtext of it because of how fast the subtitles are thrown on the screen. However, here you can take your time and there's a lot to be said for being able to chew on the dialogue a little to make sure you’ve taken away everything you need before moving on without being distracted by the on-screen action.

In other words, if you have any investment in this franchise and you’ve been considering NOT picking this up because of, say, the relative weakness of this story arc in the anime version, you may want to rethink that decision (though you can be excused for holding out for an E-book version - we only have so many shelves after all Vertical!). This is a bizarre and fun slice of all that's good about this franchise and is well worth your time!

8
A tale told with style, flair and cat girls!