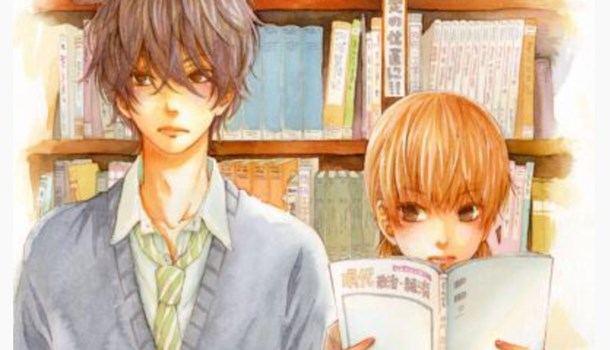 It's good to have ambitions when you're growing up - whether your goals are modest or lofty, having something to strive for that drives you forward is undoubtedly healthy. What isn't so healthy, however, is focusing on your goal and working towards it to the exclusion of everything else, which is exactly the state of play with the protagonist of My Little Monster, a new addition to Kodansha Comics' western catalogue.

Shizuku Mizutani is a girl who lives to study - not so much because she enjoys it as much as a desire to get a highly-paid job, becoming a millionaire and live a comfortable live of relatively riches; a desire borne, perhaps, from her parents job as owners of a small grocery store. As studying so hard leaves her with no time to make friends, Mizuntani is very much a loner, and it doesn't bother her one iota. Of course, this wouldn't make for a very good shoujo manga, and so Mizutani finds herself tasked with taking some printouts to her classroom neighbour - a boy she's never met by the name of Haru Yoshida, who hasn't been attending school since being suspended for getting into a fight on the first day.

With rumours swirling about this delinquent, Shizuku isn't exactly thrilled to be lumbered with this job - in fact, she's been bribed by her teacher to carry out this task in return for some study guides - but little does she know that this seemingly random encounter is about to change her life forever. Upon meeting Haru and handing over the notes in question, Haru sees this act of kindness of a sign of friendship, and as events conspire to persuade Shizuku to coax Haru back into attending school so she ends up with him sticking to her like glue.

It's fair to say that Haru is an odd lad - a terrible judge of character and completely unable to read social cues or situations, with hilarious or downright embarrassing consequences. Beneath this, however, is a heart of gold and a boy who just wants to make friends, and irritating though he might be Shizuku finds her attitude towards him softening, especially as it begins to open up new dimensions in her life as she finds herself associating with other students and even (shock, horror) eating out. Maybe being distracted from the constant rigours of study isn't so bad after all... and maybe, just maybe, Mizutani is falling for her rather unusual first friend.

If you've read many romance-centric shoujo series before, you'll know that they tend to move their relationships forward at a glacial pace - it can take twenty volumes for the lead characters to so much as hold hands, let alone anything else. In contrast, My Little Monster's first volume moves at breakneck speed - across its opening chapters we have multiple confessions of love, a kiss (albeit an unexpected one from one party's perspective) and a whole lot of seismic shifts in the relationship between Shizuku and Haru. This constant movement in the state of play is where a lot of the volume's entertainment value comes from, as Shizuku desperately tries to fathom the state of play and what Haru is thinking, which usually comes to naught on account of a combination of his inscrutable behaviour and Shizuku's lack of experience in terms of social interactions.

In fact, Mizutani's character is a highlight of the volume throughout - she isn't your usual self-conscious social recluse, but a self-confident, driven and assured girl who is willing to tackle any obstacle provided she actually cares enough to do so. By the same token, she isn't your typical "genius girl" either - she's flawed, moody and can make mistakes, which makes watching her trying to get a handle on events throughout these chapters a lot of fun. This is backed up by a strong supporting cast, as new friends pop into her life to round things out nicely, and Haru himself offers enough bright moments to make him a likeable fellow once we progress beyond his early labelling as nothing more than a delinquent.

If there's one thing that threatens to undermine My Little Monster, it's that it's a bit hard to buy into Shizuku falling in love with Haru - beyond their basic similarity in terms of lacking in social skills, this feels like neither a case of "opposites attract" nor a scenario where the pair have much in common. For a girl so heavily imbued with common sense and practicality, falling for a loose cannon like Haru doesn't seem to make much sense to the point where it might spoil the series for some unless you're willing to write it off as a mystery of the heart.

In terms of artwork, My Little Monster doesn't dazzle or amaze, but it does provide a solid foundation for the volume's story and comedy - its characters are recognisable and only tend to drift off-model in the deliberate pursuit of comical expressions. There are a couple of points where what's going on feel a little indistinct due to some clunky writing and transitions between panels, but thankfully such moments are both rare and brief. Kodansha Comics' translation of this volume is solid, with a decent body of translation notes and no other issues beyond a single error that we spotted with a missing word mid-sentence.

My Little Monster might not be a complete departure from the standard narrative devices of shoujo manga, but it is nonetheless refreshing enough in its pacing and outlook to be enjoyable even to those ordinary frustrated by some of the medium's conventions. With a great protagonist and entertaining supporting cast, this opening volume blitzes through its story at an enjoyable brisk pace, bringing with it sufficient smiles and laughs to be well worth reading provided you can accept its central romantic premise.

My Little Monster is available digitally on supported Kindle and Nook devices, as well as in physical book form

7
A refreshingly fast-paced and entertaining love story with an enjoyable cast of characters make for a strong opening volume to this series.