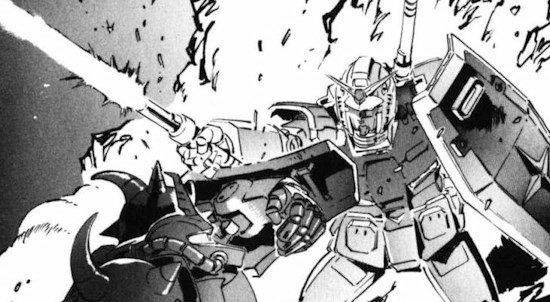 When I heard that Vertical had picked up Gundam: The Origin, I was honestly delighted. Created in 2002 as a manga retelling of the classic animated Gundam series, it was originally released as 23 books before being released as hardback, leather-bound special editions which incorporated 2 standard books and a greater number of colour pages.

What we have here is a bit of a fusion; the books are no longer leather-bound, but are hardback and contain 442 beautifully crafted retro-pages of mech action and human drama.

For those new to the series, Mobile Suit Gundam is one of the pillars of modern mech shows. It introduced an anti-war message which pulled no punches when it came to the horrors of conflict, whilst simultaneously showcasing groundbreaking mech design.

With half of humanity wiped out through war between the Earth and its space colonies, the fragile balance of power is constantly threatened by ambitious parties on both sides. The Gundam unit is the latest countermeasure to the Zeon forces' infamous Zaku mobile suits, and it's during transport of two such Gundam units that we meet Amuro Ray, the fifteen year-old son of the Gundam's creator. As Zeon - through its lethal agent Char Aznable - moves to eliminate this new threat, Amuro's colony is caught in the crossfire, and it's not long before the colony is crippled and the survivors board the one vessel that can take them to safety, the Gundam transport ship White Base.

I have to admit that I haven't seen the original Gundam series, my only real contact with it coming through it's closest offspring Gundam SEED. The latter series is essentially a modern retelling of the original story with modern sensibilities (and marketing) thrown in for good measure. Everything I loved about SEED is present here; the breakneck rush to escape a collapsing colony, a ruthless and remorseless enemy prepared to chase them through space to destroy the survivors, and the feeling of desperate camaraderie that such events can facilitate.
With The Origin however, it feels very much like a streamlined SEED, and is actually better for it. However, having enjoyed SEED, I'm getting a great deal of extra pleasure noticing the differences. The most notable has been comparisons between Gundam's Fraw Bow and SEED's Flay Allster - where Fraw overcomes her grief and maintains a positive outlook, Flay essentially went postal and seduced SEED's Kira Yamato into killing the enemy. The original certainly had a less sensationalist attitude to war, but I can't help feeling that SEED nailed it for raw human emotion.

Such musings aside, what we have here is a gorgeously presented book containing the blueprint for modern mech series. The artwork is suitably retro, and every panel is just wonderful to look at - the artist has utterly nailed the essence of the series, and although the speech bubbles may be a bit hard to follow at times, it's everything you'd want as both a long-time fan or a newcomer like myself.

All credit to Vertical for releasing this in such a beautiful package, especially when Viz had already tried and failed a few years ago. As if the manga wasn't enough, the book also contains essays by Hideaki Anno (Evangelion), Shinichiro Inoue (CEO of Kadokawa Shoten Publishing) and series artist Yoshikazu Yasuhiko, all of which make for fascinating insights.

If you have ever enjoyed a Japanese mech series, you owe it to yourself to read this book. It contains such a rich vein of character, drama and imaginative concepts that its influence is still felt over thirty years later. For this reason alone, it deserves both your time and your respect. Oh, and it looks awesome on your shelf.

10
Proof that a classic tale never truly ages, Vertical have once again proven their exquisite taste for top of the range releases. Essential reading.