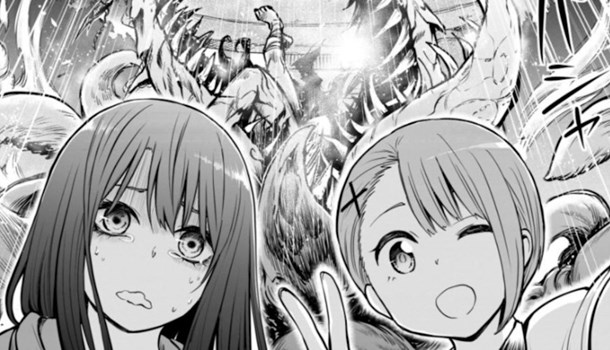 Originally conceived as a one-off short-story, Mieruko-Chan is the tale of a young girl who can see the dead, and what a terrifying bunch they are! Ghouls, spectres and macabre sights are a regular feature of her life, and the only way she knows to stay sane is to try her best to ignore them. That's no easy task given their penchant for popping up out of nowhere or doing unspeakable spectral things to those around her.

For the most part, this first volume concentrates on Mieruko's attempts to ignore the creatures surrounding her, which despite some excellent artwork (the ghouls are genuinely imaginative and repulsive in equal measure) started to get a little stale around halfway through. Happily some of the better ideas do lift things beyond just random everyday encounters; in one instance Mieruko, trying to find a home for a stray cat, rejects a charming looking gent because he's surrounded by hellish spectres, while a creepy, gangster-looking thug is given the cat because he has two cute ghost-cats on his shoulders - turns out he lost his wife and the cats, and dotes on the lost kitty. This was a nice way of using the hellish visions to achieve a positive outcome, and it gave me incentive to keep reading.

It's not the only neat little twist the book has going for it, and while some books that start off as one-shots can be stretched too far (Takane & Hana springs to mind) this might just have some real legs.

I can't really discuss the book without touching on the copious fan-service in the early chapters - the point of view shots of Mieruko often focus on her curvier parts, including see-through nightwear and plenty of her bending over. Thankfully this falls away in the latter stages of the book, and while I'm no prude (certainly, horror and sex have long been intertwined) it was really distracting here. Being a one-shot I get the feeling this was done for attention, but once the story settles in, the need for cheesecake seems to abate.

The art is beautifully dark and gritty, the concept is expanded in some unexpected ways and I actually liked the main character. Far from being a "Scream-Queen", Mieruko keeps it together and begins to use her abilities to the advantage of others, so I'm curious to see where the story takes her next. I also like the touches of humour the author injects into proceedings, a welcome balance to the myriad shades of grotesquery to be found on every page.

If you like horror with a brain, you'll doubtless enjoy Mieruko-Chan. As the genre goes, this is certainly on the tamer and more cerebral side, but it's a fun tale with great art and some fun touches.

7
A solid opening to this new horror series, it has some interesting ideas that it executes well. One for those who enjoy things that go bump in the night.