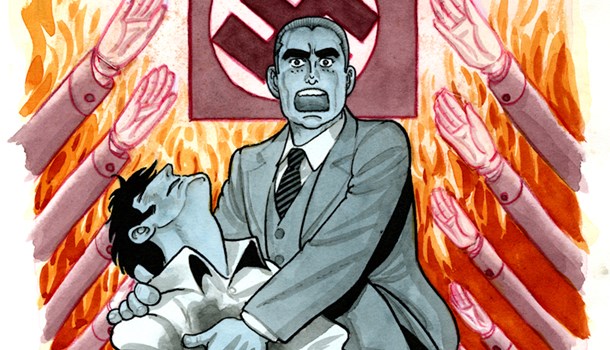 "Adolf" is one of the manga I have tried to read multiple times previously. Long ago I hounded eBay for copies of Viz’s version of the series, and in more recent times I turned to the weekly Astro Boy Magazine, but in both cases my efforts fell flat. Thus I was pleasantly surprised when Vertical, who had already published other wonderful Tezuka works in English, took on Message to Adolf. As is their habit they applied an arresting (some may say garish) cover design and sent the book out into the world. In this case they collected Adolf into two mammoth volumes, this first one stretching to approximately 650 pages in a weighty hardback collection that really hurts when you drop it on your foot. Accidental injury aside, how does the book stack up?

Message to Adolf concerns the lives of three men who share that single first name - Kaufmann, Kamil, and Hitler. Set in the years leading up to and during the opening stages of World War II, the entire story is told in a flashback set up in the first scene by a news reporter, Sohei Toge, who introduces himself as a secondary character to the events that unfold. There is a slight irony in this introduction as Sohei then goes on to be the primary focus of most of this first volume, starting with the grisly murder of his brother during the Berlin Olympics. Hunting for the people behind the murder, Sohei becomes embroiled in a deadly conspiracy centering on a series of documents containing a secret that could topple the National Socialist government in Germany, ending Hitler's reign. While Adolf Kaufmann and Kamil are growing up, Sohei battles to keep the documents out of the hands of those who pursue him. I dare not give out more concrete plot details than that, as they are much more powerful to discover on your own.

While not without issue, Message to Adolf is a taut, engrossing thriller, pulling you deep into its web of intrigue and suspense from the very first pages. Tezuka again shows why he is called the “God of Manga” in doing so, using a number of great light touches to slowly build up the unease and reveal the characters and goings on to you. Clever and frequently surprising use of perspective, backgrounds, character expressions, deep back shadows, panel arrangement and even the very borders of the panels themselves are all used to grab you and keep you deeply embedded in the story, something which made the book hard to put away when I was reading it during breaks at work. While most pronounced at the beginning, the level of craft never really wanes - detail is lavished into the locations, and particularly the people, on every page. A lot of this care comes to the fore during the more distressing moments (of which there are many varied kinds; this is set against the backdrop of World War II after all), where the page itself deforms to the rising emotions of the cast, plunging the art to new depths of emotion and dragging you with it.

At its peaks, Adolf drags you bodily into the story through its varied and often conflicted cast, making you feel the pains of the era and above all the futile struggle of those caught up in the events of the time as things spiral towards their inevitable and historical conclusion. The book has a few trademark Tezuka nods and slapstick moments, which along with other lighter moments help to give you a breather from the onslaught of tension without letting you break entirely free of its spell.

While there is an awful lot going within the narrative of Adolf, it does stumble in some frustrating ways, the first of which is the semi-frequent use of an external narrator, which is employed with all the subtlety of a sledgehammer. This tends to be deployed in the book's quieter moments, shattering the tension in a very blunt, inelegant way by flat out stating a character’s emotions and what is in store for them instead of letting the art and the momentum of the story speak for itself. This was merely irritating the first time it occurred but as it continued to crop up, particularly at the end of chapters, it stripped the story of its previous self-assured nature, almost as if it did not trust the reader to keep up.

Another issue is that Sohei Toge is a rather difficult protagonist to root for, and at times feels more like a plot construct than a real human being. His motivations are clear, but the ways in which he acts on them can sometimes not follow from that. While this applies to all the characters to some degree, and a certain amount of this is due to their inability to act given the political landscape, Sohei does this the most often and with the most impact to the story at large. His moral compass is fluid and can change on a whim, making him hard to pin down or really empathise with - particularly when you take into account that he does some truly terrible things over the course of his story, without remorse in some cases. Finally, he exudes a Golgo 13 style pheromone that means that any and all females in the story instantly fall in love with him and want to do nothing more than be an accessory to his life and adventures, dooming their character development to an early grave.
The last thing to poke at is that the story has a bad habit of clearing out characters when they are no longer relevant to the plot. While this does make for some very exciting action scenes, thrilling emotional notes and a strong motivation for those who remain, it feels as though this is done for convenience as it saves having the character linger in the background, or needing to resolve their arc in a more substantial fashion.

Message to Adolf is a wonderful thrill ride, breakneck at times, marred by a few poor choices that serve to stop the series from reaching the dizzying heights that it strives for. Even taking these issues on board, this first volume is an absolutely engrossing read that is both exciting in its own right and also sets its second volume up nicely via a rather ominous note in its very last pages. While you know how things will turn out from the very first pages, watching them play out is still fascinating.

7
A tense, wonderful thriller that wraps you up in a tight and engrossing story - but one that sadly lets itself down with a few poor decisions.