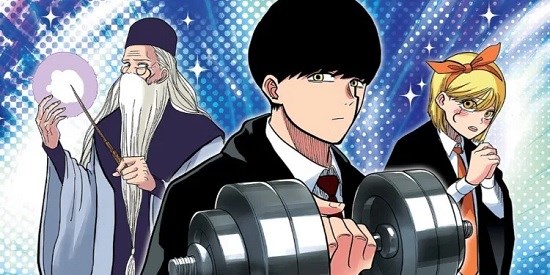 One of the criticisms levelled at manga as a medium is that it can be very formulaic, with stories strictly adhering to rigid tropes where plot progression runs straight down cast-iron rails. In all perfect honesty, it’s not an entirely unfair judgement, at least in the more populist genres that fill light novels and the shonen and shoujo anthologies. A case in point is the “Magical High School” genre: one of the key conceits of these stories is that the hero being enrolled into the school will on his initial entry evaluation be immediately judged as a magical incompetent and sent down to the bottom stream. However, what is invariably revealed is that the hero is not as weak as he’s been rated – he’s actually an immensely talented magical prodigy, it is was only that his talent is in a particular field that the evaluation’s parameters did not measure.

As tropes go, it’s an efficient and utilitarian one. As I mentioned in my review of Magus of the Library, the reader gets to both have his cake and eat it too – enjoying the moral privileges of the struggling underdog while simultaneously indulging in an omnipotent power fantasy. Of course, no-one goes to a magical high school to actually, y’know, learn magic: the only reason someone joins one of these exclusive prestigious private academies (and they’re always private academies – no anime wizard ever has to make do with a GNVQ in Invocation Studies from a bog-standard comprehensive) is to destroy them in class(room) war, and when the time comes for the hero to put down all the snooty elitists who condescend to him he can whip out his hidden super-skills to put them in their place while the reader gets to skip all that tedium of actual study and practice. The very entrance exam which fails to recognise the hero’s talent is itself an exemplar of the system’s hidebound obsolescence which the hero will turn on its head. If you venture to ask the story why its egalitarian earned-not-entitled philosophy is contradicted by the hero getting ahead precisely because of his innate in-the-blood superiority, then shut up and go back to your textbook, pupil, you’re asking too many questions.

It's an efficient trope, and it’s a pervasive one – it features in The Irregular at Magic High School, Chivalry of a Failed Knight, The Misfit of Demon King Academy, and more besides. Given how severely the genre conventions are applied, can any Magical High School do anything to wriggle out of total predictability? Mashle – subtitled “Magic and Muscles” believes that it does have the strength to break free, literally.

In the world of Mashle: Magic and Muscles, magic is a universal commonplace and part of everyday life. Everyone in the world has at least some magical ability to a greater or lesser extent, confirmed by the line-shaped birthmark that appears on everybody’s faces. There is only one exception – a teenage boy who glories in the stupendously anime name of Mash Burnedead. He may be the only person in the world with no line on his face, because he’s the only person in the world who cannot cast magic spells and is a complete magical blunt with not just no aptitude for magic but no capability at all. Mash’s father, justly fearing that his son would be persecuted for his magical disability, has kept Mash completely segregated from society and the pair live in a forest hermitage where Mash has had absolutely nothing to do for his entire life other than to pump iron! Years of training have given Mash ludicrously supreme levels of physical strength – he can lift an entire gym’s supply of weights with one hand while still scoffing a cream puff with the other.

Unfortunately, the upshot of living in isolation is that Mash is completely unsocialised and just doesn’t understand why his clean un-marked face is such a problem. An unguarded trip into town to restock on cream puffs thus brings the Magic Police to destroy his home and nearly kill his father, but Mash defeats all of the attackers, overcoming their spells by sheer swoleness – magic missiles just bounce off his pecs!

The leader of the police detachment, one Brad Coleman, is stunned by Mash’s incredible strength and then has a bright idea. Brad is a low-ranked magician and he resents the fame and fortune that powerful sorcerers enjoy – so, he presents Mash and his father with a deal. Now the Burnedead family’s secret is out, they’ll be hunted as aberrations for the rest of their days – unless they submit to Brad’s own custody.  In exchange, Brad will pull some strings (and provide a supply of face-paint) to get Mash enrolled in the venerable Easton Magic Academy. Brad has ambitions that Mash’s strength will compensate for his lack of magic and get Mash lauded as one of the school’s “Divine Visionaries”, showered with treasures which Brad will then claim as payment for protection. It’s a racket, but one to which Mash nonetheless happily submits – he’ll do whatever it takes to protect his father and find a place for themselves in the world, even if he needs to beat it all out of shape to make it fit him!

Mashle is not the first manga to feature a muggle as the cuckoo in a nest of wizards – another earlier manga with a similar concept is 2006-08’s Shonen Jump series Mx0, which has made its way Westwards in French, Spanish and Italian (but it has not yet received an English edition, so Mashle still remains fresh enough for our own shores). The Easton Magic Academy where the action of Mashle takes place is also, erm… indebted to Hogwarts, with multiple scenes that look like they’re traced directly from the Harry Potter movies, from a headmaster who dresses exactly like Dumbledore to a broom-flying lesson which directly imitates shots from the equivalent scene in Harry Potter and the Philosopher’s Stone. Good grief, in one chapter they even play a blatant version of quidditch! It is very easy to call Mashle derivative, not least because it religiously follows the Magical High School tropes with which I introduced this review: Mash will meet a variety of swaggering bullies, contemptuous aristocrats, officious teachers and self-important honours students who will all get trampled underfoot by Mash’s die-straight walk to his goal that knocks down walls and kicks in doors rather than go through the trouble of going around or opening them. While the opening chapters of the manga do show Mash deeply invested in his physical training, which would seem to subvert the typical cliché of the Magical High School hero’s hidden talent, but it is undermined by the early revelation the Mash is not actually his father’s biological son but rather someone discovered as a foundling precisely at an opportune moment, raising the possibility that he’s some special chosen one descending from on high, although we’ll have to wait for later volumes to see if that pans out as expected.

As much as the plot and setting of Mashle is so by-the-numbers that you can use it to recite your times tables, the manga shouldn’t be dismissed entirely out of hand just because of that. Mashle is a comedy, and it does not invest much originality in its world-building because it’s mainly just there to establish context, a clothes-horse onto which Mashle can hang its jokes. However, if you’re going to be playing it safe with the story, then it’s doubly important that those jokes are funny. Do they measure up?

The humour of Mashle: Muscles and Magic rests on three different pillars. One are the double-takes other characters pull when they are astonished by Mash’s ridiculous super-strength: these work fine, if a little reminiscent of Mob Psycho 100 with the flat sketch art. The second is Mash’s lack of social awareness, mainly in his inability to recognise social cues and the misunderstandings that ensue: this can actually work in an atypical way because rather than agitating tsundere love interests – this is a completely fanservice-free, all-ages manga – it often serves to infuriate Mash’s enemies who become aggravated that they do not get the expected reactions from their mark, as Mash simply does not understand that he’s being insulted!

These two types of humour are decent, but the main event and the key source of Mashle’s humour are the various off-the-wall ways that Mash compensates for his inability to cast magic by using his super-strength to indirectly simulate the effects of magic. For instance, in the aforementioned broom-flying lesson, every other magician in the class can summon their broom into their hands with a spell-word: Mash cannot do this, so instead he stamps the ground so hard that his broom bounces off the floor and into his grasp. In another scene, a wizard has cast a spell to scramble Mash’s test paper so that the text writhes around on the page like worms – Mash gets them to line up again by his heavy presence essentially intimidating the text back to regularity. To give more examples would defeat the purpose of reading as the novelty and invention of these various dodges is their appeal, but it will suffice to say that Mashle does work well in demonstrating deft lateral thinking on avoiding magical conundrums. However, the question remains for how long Mashle will be able to keep up this inventiveness into later volumes – already there are signs that the setting is having to bend to accommodate Mash rather than the other way around, such as him finding very handy things which just so happen to be in reach in the magical duel which ends this volume. For the time being though it still works – it’s not “I cast FIST!” levels of gutsiness and charm, but you do nod along.

Mashle’s art is simple and its story is plain – the between-chapter intermissions include a potted history of mangaka Hajime Komoto’s struggles to make it into Shonen Jump with his first serial, which actually don’t interest me as an industry insight because to be honest they feel a bit cynical, guilting me into buying more of the series with a bit of a hard-luck story. Nonetheless, while it does not stand out in other areas Mashle does have some decent jokes and provides enough of an iteration on the concept of the Magical High School to stand apart as its own title. As Viz Media’s SJ-series titles are a bit cheaper at £7.99 a volume rather than £10.99, Mashle thus keeps its value for money as a simple pulpy patter of light comedy.

6
A standard story but whose lead has a cute gimmick that’s good for some chuckles.