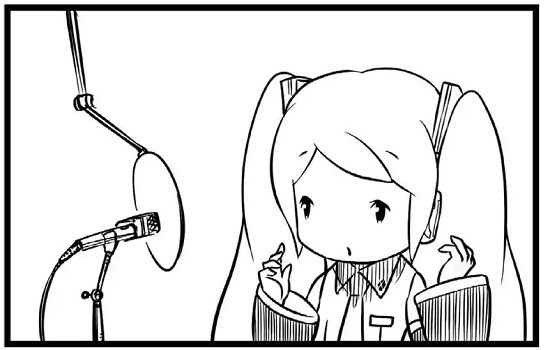 Given her rise to prominence from little more than some cover art for a piece of software through to a Japanese (and increasingly global) superstar, it will surprise nobody to see Miku Hatsune enter the realms of manga - indeed, there have been a handful of outings involving the world of Miku and her Vocaloid stablemates over recent years.  This brings us to MIKU-4, and a manga which most certainly will surprise you in its tone and content.

While most Miku Hatsune-based manga tend to go down the comedy or slice of life routes to make use of the Vocaloid diva's cutesy charms, MIKU-4 really couldn't be more different - instead, we're introduced to a very young Miku as an inhabitant of the laboratories of Crypton Future Media (the company responsible for producing Vocaloid software).  Rather than a friendly, parental environment, life seems to be decidedly harsh for young Miku as she's prodded and tested more like some kind of lab rat than anything remotely "human", and once that testing is complete she's cast out into the wider world with nary a hand to guide her.

Luckily, our young starlet soon encounters some friendly faces in the midst of the hustle and bustle of life, and it seems that things are looking up for Miku - or are they?  Even when everything seems to have settled down, the bittersweet realities of life mean that happiness is far from guaranteed for out little musical maestro.

As you might have gathered from this synopsis, MIKU-4 is far from a cheerful, comedy-led four-panel manga - its tone is surprisingly depressing from beginning to end with only the occasional shaft of proverbial light to penetrate its sense of melancholy.  In a sense, it's amazing that this story got the go-ahead from Vocaloid's "gatekeepers" at Crypton Future Media at all given how that organisation is portrayed as uncaring and borderline abusive to its superstar within the manga.

Also of note is how this particular manga relies upon imagery rather than text or dialogue to convey its story - even without JManga's English translation it's easy to figure out what's going on and the emotional tone of each panel, or at least to construct some kind of internal narrative around it a la Raymond Briggs' The Snowman.  That isn't to say that MIKU-4 is a visual tour de force however; although it has its moments and certainly fits quite snugly with its subject matter, the general art quality is rather spotty and is rather plain, sparse and simple a lot of the time - an issue made all the more apparent by that aforementioned lack of dialogue to detract from it.

No matter which way you look at it, MIKU-4 is a strange beast - a Vocaloid inspired offering which couldn't be further from the kind of subject matter you'd expect to see from such an outing.  This twist is certainly refreshing and even brave in its outlook, but unfortunately beyond this its concept and story struggled to really shine at all - ultimately its bittersweet look at life feels a little pointless is its sense of melancholy and hopelessness overtakes any more positive vibes you could take from the series.  Even as a dark piece it isn't particularly striking or entertaining to read and flick through, and despite its best efforts it's a decidedly hard piece to recommend to anyone.

MIKU-4 is available to be read and purchased at JManga.

4
It's a very unique take on Miku Hatsune as a character, but ultimately there's too much melancholic style and not enough redemptive substance to mark MIKU-4 out as anything but an oddity.