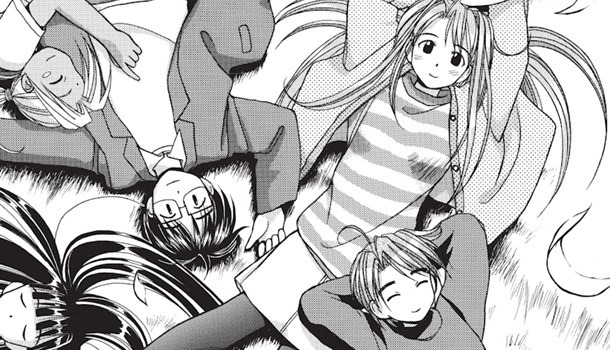 Like Initial D, the anime version of this manga never held my attention - not because its no good (like Initial D), but because I never had time to sit down and watch 26 episodes. The manga may force me to make the time, because its actually pretty entertaining.

At first glance, this isn't terribly original - nervous, lonely young student (Keitaro Urashima) ends up in a house surrounded by lovely young women with wildly differing personalities, and somehow everything he does ends up as a disaster, leading them to believe he's some kind of lazy pervert, despite his best intentions...

In fact, even at second glance this isn't terribly original, but it is very well managed, and as such the storylines and situations hold your interest long enough to get you engrossed. The cast of characters are all likeable, and their motivations are all believable enough to allow you to suspend disbelief at the wackier aspects.

The artwork is very cute, but precise and detailed. Page layouts are suitably dynamic, creating a feeling of pace and urgency where necessary. The artist obviously loves his characters, as they're never less than wonderfully drawn, even when in the background.

Love Hina One thing that did strike me was the fact that the manga seems far less "wacky" than the anime. Where the anime tried to grab you with hilarious sequences, the manga retains your attention with the excellent relationships the cast develop with each other. Whilst the pace may be ever so slightly more sedate, the experience is richer for it.

Love Hina's only weakness is that it has to compete with the other student romance manga's that Tokyopop are releasing, such as Kare Kano and the more adult Mars. It compares favourably, but I'd be looking to get Kare Kano and Mars before getting hold of this.