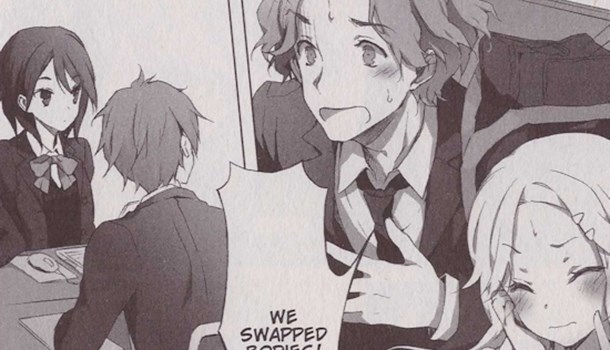 If you look at the concept of swapping bodies through the lens of Hollywood movies, you'd be forgiven for thinking that the whole endeavour would be a whole lot of fun - just imagine the chaos that you could cause within the body of another, especially if that person was markedly different from you in terms of age or gender! Of course, the reality of such a situation would probably be rather different - how would your psyche cope with a transfer into another's body, and what effect would it have on any insecurities and foibles you might carry with you?

Such thoughts are far from the minds of the quintet of stars of Kokoro Connect as this manga adaptation of the original light novel series begins - instead, they're simply enjoying their school lives as fellow members of the Student Cultural Research Club, comprising of a ragtag collective of individuals who formed under the banner of not being able to find any other clubs to join. In spite of the ill-considered foundations of the club the result is a surprisingly strong and hard-working one which still allows for plenty of time for its members to lark about and enjoy one another's company.

Given the groups seemingly light-hearted attitudes towards life, when two of the club's members - Yui and Yoshifumi - claim to have somehow switched bodies for a brief period in the middle of the night the others all assume that the entire thing is a half-baked joke, and indeed even those involved seem more than a little unwilling to press their claims any further lest the whole thing turn out to be little more than a bad dream. However, when Taichi and Iori, another two members, find themselves in the same situation during after-school activities any doubts are lifted - something has afflicted this group and is causing them to seemingly randomly switch bodies for equally random periods of time.

Of course, there's a mastermind behind all of this, but troublingly the individual who claims responsibility - who dubs himself "Heartseed" seems to have chosen to embark upon this little experiment for no other reason than for his own amusement, and it appears that this phenomenon will show no sign of abating until he's had enough fun to become bored with the whole endeavour.

In light of all this, the members of the Student Cultural Research Club remain surprisingly calm - there's no point panicking or trying to tell anyone about what's going on (who'd believe their story anyway?), so they simply accept their situation and prepare for worst-case scenarios as best as they can to mitigate the impact on being swapped into another's body at any given moment in time. The clear-headed thinking on show is commendable, but as their ordeal continues it becomes clear that for all of their outward bravado some members of the group are undergoing difficult internal struggles with the situation.

Its these personal struggles of the cast that become the pivotal factor in Kokoro Connect's story-telling, but this first volume only has time to scratch the surface of this, mostly as it pertains to Yui as an uncomfortable secret of hers comes to light. Instead, much of the volume is spent introducing us to its characters - a sensible move as familiarity with and affection for the cast is a key tenet of the effectiveness of its narrative. Thankfully, these introductions are carried off pretty well simply by letting the cast go about their business so that you can gauge their personalities for yourself rather than having that information spoon-fed to you, and by the time the real meat of its first story arc begins to loom into view you're already sufficiently familiar with the major players to be invested in their plight.

This opening volume is also greatly aided by eye-catching artwork, which is undeniably cutesy in its presentation (as you might expect of an artist known as CUTEG!) but appealing and effective. In fact, perhaps the smartest thing this manga does comes from the way it handles any body-swapping incidents between characters, ensuring that their speech bubbles are accompanied by small chibi illustrations of the character occupying the body of the individuals in the panel so that you know who is actually speaking at any given moment in time. Without the ability to lean on voices and speech patterns as the anime does to advertise any switches, this is a piece of small but notable genius that works wonderfully at greasing the wheels of understanding who is involved in each and every conversation.

This decision is all the more useful for the fact that some of the dialogue feels a little flat and staid - it does seem to improve as the volume progresses, and it's hard to tell whether this is down to the book's translation or the source material, but its first chapter or two certainly feel like an adaptation that's trying to find its feet, and more importantly its voice. Once this issue fades into the background, this opening volume seems competently written and translated, again easing the reader into events that will transpire in future volumes.

With its anime adaptation also reaching the UK next month, it's a good time to be a fan of Kokoro Connect. Although the opening volume of this manga adaptation loses out on some of the energy of its animated sibling simply on account of its nature, it still looks set to be a proficient and visually appealing take on an interesting story that functions perfectly well as an introduction to those unfamiliar with the series while also offering existing fans another way to enjoy that strong narrative. As with so many series, the next volume or two will really prove whether this adaptation has what it takes to deliver the strengths of that story fully, but for now it's off to a competent and promising start.