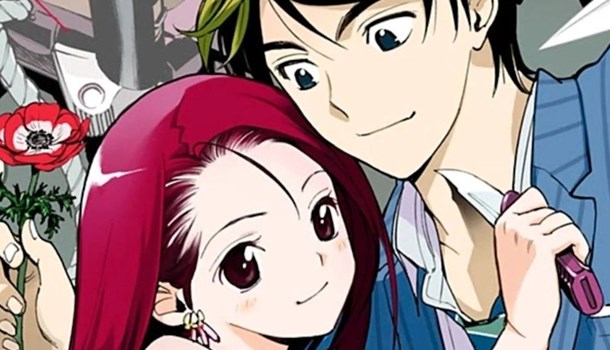 So what does a brilliant millionaire industrialist do when he falls in love with an assassin? When you're Aoi Nemo, the answer is straightforward -  take out a hit on himself. Cue the attention of the object of his affection, Akaumi Kiruru.

Under normal circumstances, this would be suicide, but with endless biological enhancements at his disposal, Aoi can make himself practically indestructable, which frustrates our would-be-killer no end. Each failed attempt brings Aoi one step closer to  getting the date of his dreams, and the unfortunate Akaumi closer to a nervous breakdown as her fellow assassins start to question he competency.

As romantic comedies go, Kiruru has a few nice touches. The central premise certainly works in terms of depicting how a brilliant man can be turned into an idiot through his own lust, and Kiruru really isn't a good person as she readily acknowledges. As such they could be hard to root for as a couple, neither one of them really deserving a happy ending. Despite this, the premise actually works in the book's favour, being stupid enough to be endearing despite the unlikability of both lead characters. The setups for each attempted hit are imaginative and varied, as are Aoi's defences against his own hired attacker. It's this constant attack/defend dynamic that makes the book interesting enough to hold attention, in much the same way Kato's attacks on Inspector Clouseau were so effective in The Pink Panther. It may not be laugh-out-loud amusing, but it regularly got a chuckle out of me for the sheer stupidity of it.

Of course, by the end of this first volume we start to see new characters emerge to keep things fresh - Aoi's bodyguards and his new admirer Aikima Minamo make life difficult for him, while Akaumi's "frenemy" Margaret has her eyes on the juicy reward for her rival's victim. There's just enough characters and motivations thrown into the mix to ensure that threats and problems aren't all caused by our central pairing.

The art is beautiful - you can certainly see why Aoi is attracted to Akaumi, she's an absolute bombshell with some wicked curves and a very good grasp of fashion. The panels are dynamic, flow well and give a great sense of speed and motion when they need to, all of which are essential to an action-oriented book like this. There's quite a bit of cheesecake as Aoi's imagination runs wild whenever he thinks about his intended lover, but short of some bare breasts there's nothing quite so direct as, say, Yakuza Lover or Gleipnir. I'd be wary of reading it on the bus though.

So does the book do enough to justify continued reading? Certainly the story is off to a strong start, setting up the premise and characters with relative elan. It does feel like the cat and mouse dynamic has a limited lifespan, and after a few books like this I think we'd need to see a shift in dynamic - perhaps having Kiruru losing the contract to another killer and having to switch sides, or Nemo's father paying another assassin to protect his son, but I'm invested enough to pick up another volume and see which road awaits our mismatched couple.

7
Lots of potential here with some great artwork and fast-pacing. Whether it can keep up the interest remains to be seen, but it's an unusual comedy manga with plenty of style.