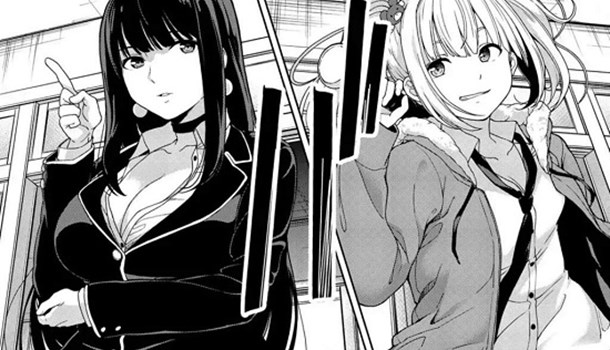 You might think that much was obvious, but you’d be astonished at the amount of zombie fiction which goes out of its way to insist that it is a real and present danger. From the T-Virus of Resident Evil to the fungal cordyceps parasites of The Last of Us, many pieces of zombie fiction want to threaten us with contamination of a genuine pathogen that any of us could actually catch, a theme enthusiastically taken up in films and literature too like perennial Halloween candy bag-fillers The Zombie Survival Guide and World War Z. There was a phase when the zombie craze was at its height that zombie fiction underwent a cultural cringe and lapsed into an inferiority complex, resulting in it trying to avoid invoking the Z-Word and instead using euphemisms like 28 Days Later’s “Infected” to The Walking Dead’s “Them” because it made their stories seem less authentic – as though that’s a priority for gory blood-bag horror. Even anime itself succumbed to the trend – in its early chapters Highschool of the Dead made gestures towards “scientific” zombies suggesting that their zombies were blind and only reacted to sound because lack of blood flow deactivated their retinas. Why it would keep their ears working though was never explained.

The attempt to makes zombies appear realistic is understandable – the harsh buzzing whirr of the fluorescent lamps of an operating theatre or laboratory can be an asset to their horror, showing up their gruesomeness and cruelty in a stark and shocking sight. Nonetheless, try to think about the actual mechanics of zombification for more than… well, six seconds and it’s obvious that it’s arrant nonsense. For a start, your typical reeking shambler would hardly be able to maintain a feculent coating of running sores and suppurating pus for more than a few days before shrivelling into a dessicated husk that needs to apply for a change of its Universal MonsterTM genre into a remake of The Mummy.

What can be much more interesting then is zombie fiction which rather than trying to make zombies fit into our logical systems just runaway with the alternative rules of the zombie world instead, like a pure mathematics experiment just assuming different natural axioms and admiring what bizarre structures result. Whatever weird forces motivates zombies to continue lurching indefinitely, make it the driving belt of a perpetual motion machine! When I reviewed Versailles of the Dead last year I referenced the 2000AD comic book Defoe which took up their concept of long lines of “reeks” mindlessly turning treadmills to power alchemical factories; the anime-influenced webcomic Unsounded also has a similar idea with zombified “plods” being used for menial labour. Even Shaun of the Dead managed to crack a joke off the concept with the remaining mindless zombies not being destroyed by Z-Day subsequently enjoying a “fruitful career in the service industry”.

It’s this idea which first attracted me to Seven Seas’ new zombie manga Kingdom of Z. In it, the zombie apocalypse has destroyed Japan – high schooler Satou has survived the first few days of the outbreak by locking himself in a classroom but now whatever snacks that were in his classmates’ satchels that he’s been rationing out are almost gone and the school’s zombified former pupils have finally sniffed him out and are banging down the classroom door, slavering for fresh brains. It looks like this is the end for our protagonist already, but salvation arrives in the nick of time from two other survivors – Miki and Karin, who are both actually only schoolgirls but nonetheless have enough power bunched in their miniskirt-exposed thighs to crush zombie heads into a pulp. They’re an unusual pair of saviours but Satou’s relief at having a pair of hot teens with which to snuggle through the end of the world is short-lived because he may have just jumped out of the frying pan and into the fire. Why are Miki and Karin still hanging around the school in the middle of the zombie-infested city, anyway? The answer is that they’re both completely insane! Miki not only looks fine she has a design, and Karin is along for the rollercoaster ride. The two of them have actually been collecting their zombified classmates – capturing them and tying them up to grunt and growl in a closet. Why on earth are they doing this instead of putting the horrid diseased creatures down? Because to Miki, this isn’t just the zombie apocalypse but the zombie revolution – in the ashes of the old order shall arise the phoenix of the new world. Miki thinks that she’s going to train these zombies to become immortal, unkillable soldiers in an army that she commands to subjugate any other survivor groups. She really believes that she is going to found a zombie kingdom, and she shall be its queen! And poor hapless Satou will be her first submissive slav—er, valued citizen…

The synopsis makes it sound like an interesting idea but unfortunately Kingdom of Z is constrained by its high-school setting. Miki’s plan to capture zombies rather than just shoot ‘em inna ‘ead sounds like it could actually be fairly distinctive, zombie-wrangling rather than zombie-killing becoming a genuine USP, but this first volume really doesn’t show much interest in exploring this concept – as far as it goes, the trio spend most of this volume just clearing out their school in various action scenes which are decent enough but only leave you questioning where they’re getting their inexhaustible supply of smartphones to throw around as alarm-bell distractions (lucky none of their schoolmates locked them before getting bitten). In the previous examples that I gave in this review’s introduction, you could actually see the grand plans being enacted with demented rot-fuelled furnaces burning with noxious imagination – it’s all well and good having Miki say that she is going to train a zombie army but there’s no real opportunity to act on that, she just shoves them in a disused classroom and slides the door shut. Maybe that’s the idea, telling us indirectly her plan is ludicrous – but with the script showing her cool commanding confidence throughout (along with end-of-chapter tallying-up of her increasing spoils of war) there doesn’t seem to be any irony or subtext here, only that we’re going to be strung along for a very long time before anything happens.

Does Kingdom of Z have anything else to sustain it if it’s not making full use of its own concept? Satou is a disappointment – when you’re introduced to him we’re told that he’s a member of the school’s baseball team rather than the “occult research club” or some other typical otaku rubbish; however despite the promise that there might be some steel to him he turns out to be the usual stammering passive milquetoast flaccid anime protagonist that we’ve seen a thousand times before, and one whose contemptible patheticness is emphasised by how easily he’s strung along by the faint promise of some physical favours from Miki and Karin. The shadow of Highschool of the Dead does indeed loom large over Kingdom of Z – fanservice is a prominent part of this manga and even the zombies are flashing their knickers at the reader. While Highschool of the Dead was tragically and frustratingly left unfinished – and it’s safe to say will never be returned to after Daisuke Sato’s death – Kingdom of Z is not the title to revivify its spirit. Highschool of the Dead had panache and personality, with Shouji Sato’s inimitable art charging it with pulpy power where the T&A was only one slapping slice of slick style. Kingdom of Z’s art is much less distinctive. Karin and Miki are certainly attractive with their shapely thighs and unbuttoned blazers but the art as a whole is entirely more conventionally and generically “bishoujo”. It feels a bit harsh to criticise Lon Watanuki for this because there’s no reason to fault his draughtsmanship: the girls are well-proportionated and there’s nothing wrong technically with the art, but the backgrounds are so blandly typical school scenes as to be irrelevant and as this manga would only ever be compared to its more famous erotic-action forebear Kingdom of Z needed more effort to make it stand out, effort which it simply didn’t invest. There’s even one section where Kingdom of Z is anti-service. There is one page of nudity towards the end of the volume where we cut away to a different survivors’ camp where the thugs who control it are pretty much running it as a sex dungeon. The boss openly and loudly boasts about how smart he is with his plan to feed his girls to the zombies to stop them incriminating him to any rescuers while he’s pawing at them. Good grief, couldn’t you have at least waited until they were out of the room before you started cackling about your evil plan? 'Snot exactly the sort of seduction that'll get you good head, mate. It was so monumentally stupid that it pretty much sapped any sexiness out of the scene – it wasn’t transgressive it was just moronic. Admittedly Shido’s “party bus” scene in Highschool of the Dead was also pretty silly but even he didn’t gabble about how he planned to exploit the horny teens to their very faces.

I’d call Kingdom of Z a poor man’s Highschool of the Dead but it’s not even as if you can prefer this as a discount alternative because it actually isn’t any cheaper! This volume still cost £10.99!

So, in the end Kingdom of Z gives us a few scenes of decent zombie action but the manga’s body as a whole is as rotted as a zombie itself with vivid ulcers of an unfulfilled high concept and fanservice that is less seductive and more just awkward. The one thing that might get you reading future volumes is the notion of Miki’s “zombie kingdom” starting to take off with some actual implementation of controlled zombies but at this rate it’s tough mutton and not enough to feed this zombie fan’s insatiable hunger.

3
I really just want Highschool of the Dead back...