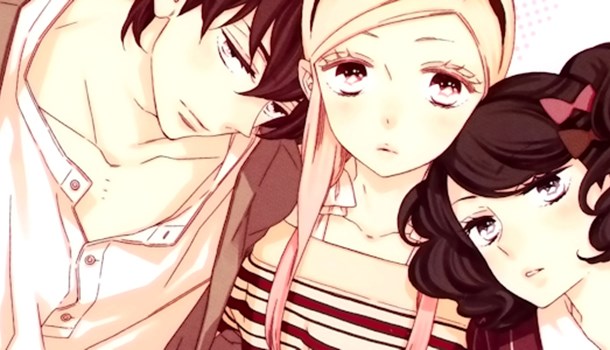 Hakka Sasakura is a standard high-school girl, with the usual crushes and school problems. However, on arriving home one day, she's greeted by a Kigurumi (think sports mascot outfit) that's been assigned to her. Oddly enough her family don't seem to mind it, but this odd looking fluffy cow/penguin hybrid annoys the hell out of her - it's rude, sarcastic and annoying.

Still, they're going to have to work together if they want to save the world.

I have to admit that the premise of this manga seemed a bit Persona-lite at first, with a creature assigned to a high-schooler tasked with saving the world. It's clearly aimed at the female market, with beautifully-drawn boys strewn throughout, and some serious wish-fulfilment going on for our lead character. But even though I'm not the target audience for the book, I will say that I found the characters engaging and the pacing fast enough to keep me from getting bored.

There are a few twists in this first volume that lead to some genuinely funny (if a bit creepy) moments, with a certain scene becoming very inappropriate later in the book. Still, it's all in good fun and can be taken for what it is.

Aside from Persona, there are comic elements from Ranma 1/2 in here too, in particular the Genma Panda style sign boards used by the Kigurumi to communicate with the main characters - since space is limited this lends itself to short, snappy jokes.

The artwork is lovely - very sharp and expressive, with some page layouts being absolutely gorgeous. It does suffer somewhat from mid-shots of characters without backgrounds, leaving much of the environmental detail to the reader's imagination. I'm not a fan of this practice, and in Kigurumi's case it can go on for 4 pages or more.

The first book ends on a cliffhanger (which is actually quite clever when you realise the clues were there) and I'm actually quite intrigued to see what happens next.

While the bishounen style of this book, in terms of writing and style, won't lend it much appeal outside the female audience, I'd still recommend having a look. You might be surprised at how solid it is, prince-charming's and all!

7
A solid, genuinely amusing start to the series that might just appeal beyond the clear Bishounen target audience.