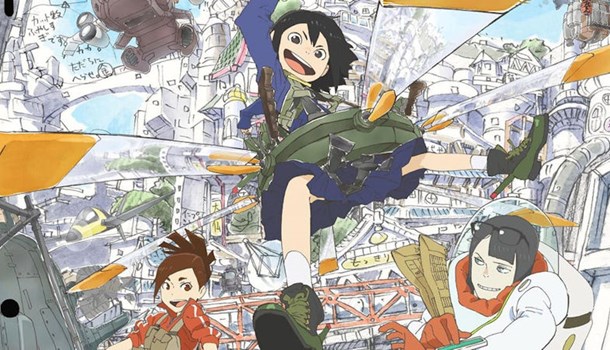 Sumito Oowara's debut manga has certainly made waves, with a nomination for Manga Taisho's best new series of the year, and even Ollie Barder at Forbes waxing lyrical over the quality of the anime adaptation, Keep Your Hands Off Eizouken feels like something of a momentous release.

I'm always a sucker for any manga series that touches on production or real-life issues, be it Genshiken's witty take on fandom, Comic Party's absurdist (but still rooted) tale of doujin, or Bakugan's obsessive detail on manga creation, Eizouken falls neatly into that subset of the genre, with animation being the driving passion at the heart of this drama.

Three girls come together to form the titular Eizouken anime club; daydreaming worldbuilder Asakusa, rich-girl character animator Mizusaki and money-hungry producer Kanamori, working together to create their own vision of an imaginative new world that they can't wait to bring to life. That will be easier said than done however; the anime society will not welcome competition, especially when it comes to fighting for a budget, and the clubhouse is derelict to say the least. It'll take some serious dedication to bring their dreams to life!

The most striking thing about the book is the visuals - character designs are kept simple, the almost muppet-mouthed main cast projecting huge amounts of personality across the book, outlined by some of the most detailed and beautiful backgrounds I've seen in a manga for some time - detailed, organic and intriguing, each structure invites your gaze. Even the clubhouse is a character unto itself, the twin extractor fans and mezzanine providing a wonderful stage for our characters to emote around. It's certainly a book that rewards repeat reading, and in an ever-crowded marketplace of Japanese ideas, any manga that can make you read it twice is really quite something.

The narrative devices used in the artwork are smart too. When augmenting a simple pod design that Mizusaki has doodled (so she can claim to draw more than just people) rather than show the extra details being drawn onto the model, the girls are depicted as engineers in a workshop physically building and applying new parts before taking it to the skies. It's a simple idea that allows us to jump into the imaginations of our characters, not dissimilar to the old Muppet Babies cartoon.

We're getting a lot of muppet comparisons here aren't we?

If you like the nitty gritty of entrepreneurial endeavours, then you'll enjoy the madcap adventures of our trio, young, enthusiastic and totally clueless. A special mention to the detailed translation notes from the editor, it's always appreciated when a manga takes the time to explain the references of another culture that may otherwise pass you by; for me, the whole point of manga is a view into something "other", and to have a tour guide in that respect is very welcome indeed.

It's a fantastic opening act and a series I'll undoubtedly follow through to the final volume.