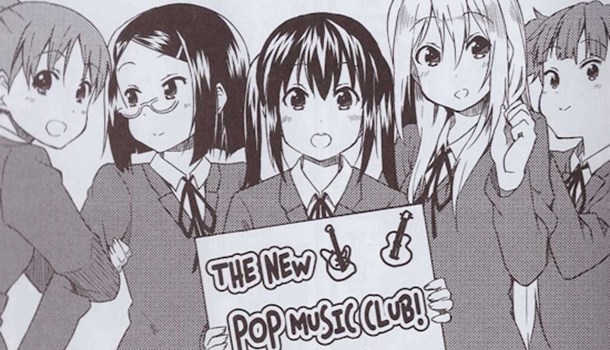 We've already taken a look at the continuing adventures of the newly graduated main quartet of After School Teatime courtesy of K-ON! College (you can find our review here), but what of poor Azusa, left alone to keep the pop music club's flame burning as brightly as possible?

Enter K-ON! High School, which allows author Kakifly to follow Azusa as she begins her own presidency of the pop music club - of course, she has a couple of ready-made replacements for the departing members of the group in the form of Yui's sister Ui and friend Jun, but three people does not an after-school club make. More by luck than judgement, the club ultimately finds itself with five members, with the remaining spots taken up by jack of all trades but master of none Nao Okuda and near-literal Tsumugi stand-in Sumire, who finds herself roped into the club after an attempt to retrieve the Kotobuki family's tea set behind goes awry.

Once these new members and their characters are established, it's pretty much as you were for the series - lots of light, fluffy banter and gags squeezed into the series four-panel comedy format with only very occasional attempts to break out of that setup. For existing fans this is certainly no bad thing - all of the original manga's trademarks are present and correct to a greater or lesser extent, and the sense of humour and simple fun that the series carries is ever-present throughout.

That said, this single volume of K-ON! High School goes to show why the series chose to end here after only a brief foray into the cast's continued lives - it soon becomes clear here that there really isn't anywhere left for it to go as it takes in the same old staples of recruiting new club members, learning to play instruments, practicing for festivals and so on. There are some nice moments involving the entirely new characters, and it's good to see more of Ui and Jun to flesh out their personalities a little, but that isn't enough to hide the fact that this is a series that has made all of the jokes it can really hope to, and that re-treading those gags any further would only threaten to bring down the reputation of the franchise as a whole.

This volume is also more of the same in terms of its art style, which again is certainly not bad use - this isn't the most beautifully illustrated manga you'll ever seen but it knows how to use its art style to comic effect while also delivering some suitably attractive colour segments and introductory panels to add a little finesse to proceedings too. As always, Yen Press provide comprehensive translation notes to add to a satisfying and nice-looking layout and presentation.

For long-standing K-ON fans, this is a decent goodbye for the series as a whole - even stripped of most of its main cast, Azusa and company take their place well enough to deliver another volume of sweet and simple comedy, and although the outright newcomers will be quickly forgotten in the grand scheme of things they all played their roles well enough. There's no room for K-ON to develop any further, but thanks for the memories.

7
More of the same is no bad thing, but this is the end of the road for the pop music club and rightly so before it completely runs out of steam.