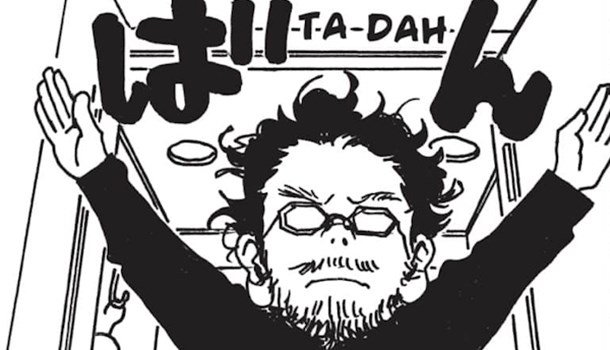 Many of you who read the content produced on this website are probably familiar with a series called Neon Genesis Evangelion. Touted as a landmark series that redefined the mecha genre, it's become one of the most recognisable anime in the industry. As you may expect, when I first learned that the manga Insufficient Direction shed some light on the life and personality of Hideaki Anno, the man responsible for the Neon Genesis Evangelion franchise, I fully expected it to heavily focus on Evangelion and the impact that it had. Instead, I found a manga that proved to be far more interesting than what I had anticipated.

Written and drawn by the wonderful Moyoco Anno, author of other manga such as In Clothes Called Fat, Sakuran, Sugar Sugar Rune etc. and wife of Hideaki Anno, Insufficient Direction is a semiautobiographical manga about Rompers, a stand-in character for Moyoco Anno herself, and Director-kun, a caricature of Hideaki Anno, about the time of their lives when they had just moved in together and were getting ready for marriage. Rompers considered herself to be an otaku but is completely unprepared for the extent of Director-kun's obsession with anime, manga, tokusatsu etc.

From the very beginning, I can imagine many people finding Insufficient Direction to be quite an impenetrable manga for one very simple reason, the references. Within the first chapter alone, which is a mere six pages long mind you, they mention Sazae-san, Gigantor, Kamen Rider, Ultraman, A Pigeon Wife, Space Battleship Yamato etc.! Luckily, the book does provide a way that helps with many of these references which I'll discuss later but suffice it to say that many will be overwhelmed by the sheer number of series that they, unless they dig very deep into Japanese popular culture, are unlikely to be familiar with.

Beyond that, the story of the manga is presented episodically with Rompers reacting to the various eccentricities of Director-kun which results in many comedic situations. To give a quick example, a particularly memorable chapter sees Rompers learn that Director-kun produced an Ultraman fan film in college called Return of Ultraman which saw him as the giant form of Ultraman and fight a kaiju. While certainly leaning into the comedy of many of these situations, you can feel the sincerity with which Moyoco Anno tells these stories and that she treasures many of these memories which sometimes results in a surprisingly emotional moment.

How charming you will find Rompers and Director-kun will vary from person to person but the relationship between them, while exaggerated for comedic purpose, works very well. Rompers is the more responsible of the two and clearly serves as the straight man in the comedic pairing while Director-kun is boundlessly energetic and excitable but has also developed some awkward habits. As she comes to accept him and his ways, you see him making some effort on his part to try to improve himself for her sake as well.

For those familiar with Moyoco Anno's artwork from previous manga, I expect many will be surprised by the art of Insufficient Direction. Rather than the large-eyed, stylised characters with realistic body proportions found in prior works, Rompers and Director-kun are drawn in a chibi art style with Rompers having swirls for eyes. Interestingly, other characters are drawn more realistically with some, such as Romper's assistants, looking quite similar to her prior character designs. The manga also makes use of a lot of negative spacing but devotes particular detail to the many references made in the manga. While the art does take a little getting used to, it serves its role well and enhances the charm and comedy of the work.

Insufficient Direction was released by Vertical Comics and is presented in a trim size larger than a standard tankoban with good paper quality that serves well for the artwork as well as having a pleasant texture. The manga itself is quite short, being around 130 pages, but is supplemented with a whopping 30 pages of annotations explaining the various references made in the series. These notes provide a wonderful amount of information and, while the humour of the series may be muted if you aren't able to identify the series, books, films etc., allows you to at least understand what it is that the characters are discussing. There's also an interview with Hideaki Anno about the manga as well as his own public image which proves to be a very interesting read. Finally, there's a page that gives a brief overview of Hideaki Anno's career, at least up to when the manga was originally released, which serves as a good introduction to those unfamiliar with his works.

Insufficient Direction can certainly be a tricky manga to digest, not because of any serious content, but from how overwhelming the references can feel. Despite that, it serves well as a comedy as well as a fascinating look at an anime industry legend who is all too often mysterious and calculated when it comes to the public eye. Fans of Hideaki Anno or Moyoco Anno will definitely want to check this work out while those looking for a short comedy manga can find plenty to like as well as long as you're familiar with classic anime, manga, tokusatsu etc.

8
While it can feel overwhelming due to the numerous references to Japanese popular culture, Insufficient Direction proves to be a charming read with good comedy and a fascinating look at Hideaki Anno, an industry legend.