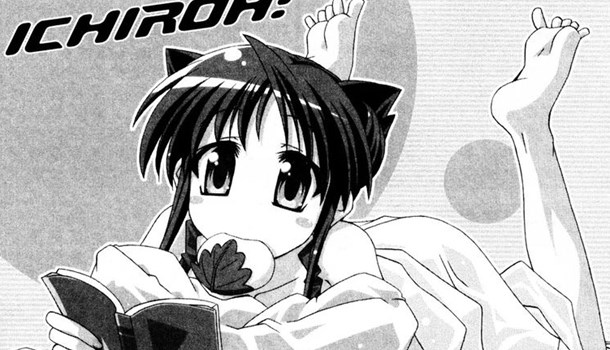 Ichiroh is the name given to students attending prep school (or make-up classes) in Japan, and that's just what Nanako and Akane have become. Failure to make the grade the first time round has given industrious Nanako the fiery willpower to turn her studies around - it's just a shame her friends aren't quite so scholarly.

To make matters worse the prep-school dorm is located on a shrine and Nanako & co. must become miko (shrine maidens) to help pay the rent - yikes!

I'll be honest, the first time I read this, it failed to click. Those of you who have followed my reviews over the years know that I'm not a massive fan of Japanese comedy, and with rare exceptions I don't count many comedic shows among my favourites.

Ichiroh! is a 4-koma (4 panel) book which contains some absolutely glorious artwork. Everything I like in fact - interesting angles, sharp detail and expressive characters, so it's a shame that the comedy didn't initially grab me.

However, Kev has also been reading it and before I posted my review, suggested I take another look. And I'm kinda glad he did, because on second reading the characters were a lot more endearing.

Video games nut Akane struck a chord I'd initially missed, and is subsequently my favourite character - her pre-occupation with playing games, whether on a TV or one of her many portables, is a good source of comedy (and not unlike myself). The ancillary characters also shine, including the shy but lovable Mai, who's trying just as hard as Nanako to succeed and forms an instant bond.

Ichiroh! is a solid performer - good scripts, fantastic artwork and some genuinely funny panels - this continues seamlessly into volume 2, which expands the scope just enough to keep the pace feeling brisk without overcrowding the cast.

A final word on the book; in common with many Yen Press titles, the book is very nicely presented - there are some colour pages featuring great artwork,and the book is slightly oversized, giving the strips plenty of room to shine.

Comedy is a very subjective thing, and I'd urge you to give this book a chance - it's daft, lovable and genuinely funny.

8
Gorgeous to look at , and with high production values, this is well worth picking up.