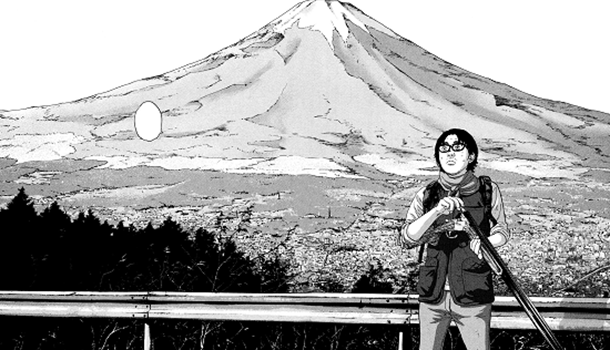 It’s been a while since the UK Anime Network saw Hideo and his struggle to survive in the zombie world of I Am A Hero, but with Halloween passing it seemed appropriate to check in on him and see how he’s getting on. Hideo, Hiromi and their new companion Suzuki have escaped the overrun shopping mall and are driving around the desolate deserted roads, searching for a place where Hiromi’s wounds can be treated – in an apocalyptic era of impossible and incomprehensible monstrous transformations and alien near-magical viruses, for plain ol’ mundane blood loss and sepsis to be what did you in would just be an embarrassment. However, as hospitals are the first port of call for people suffering injuries – including those with bite wounds from drooling maniacs in the street – they are also all now contaminated and filled with the undead. While the streets are quiet as the heart of the Japanese nation stops beating and the veins of its society stop pumping, behind every door is a cell incubating a new rotting horror as the country dies around them.

While our main trio struggles to find a safe harbour, this particular omnibus also takes a step back, for the first time removing the focus away from Hideo and his allies to how the zombie apocalypse has brought grief to others. We get to see the impact of the outbreak on Kazuya Sada – Hideo’s manga magazine editor from all the way back in Volume 1 of I Am A Hero – who’s away on a business trip in Taiwan when the tsunami of what is now clearly a global crisis slams into the country – and also the emergence of The Kurusu Cult, a new group reorganising in the collapse of civil order, and the distant possibility of them leading a fightback against the “ZQNs”… if their own bizarre uncivil proclivities don’t kill them first.

As I identified in my last review of I Am A Hero, Omnibus Vol. 4 was a disappointing low-point from an otherwise consistently high-performing series, a wrong-footed stumble from its deft dancing around the tropes of the zombie apocalypse into a muddy puddle of a by-the-numbers shopping mall siege. Happily though I can report that seems to have been a temporary blip because Omnibus Vol. 5 is immediately more engaging and does a series of quite interesting things. the first of these is the change of perspective itself. It was a genuine surprise to see Suda turn up again. He was only in a single scene back at the start of I Am A Hero and after his lone appearance in the manga offices I had him dismissed as an insignificant talking-head extra and had not thought about him once since Volume One. I couldn’t even remember his name until the manga mentioned it again, and Kengo Hanazawa ingeniously gets your brain turning over and wondering about the change of perspective before he is reintroduced by starting off with a silent scene cryptically roving over an empty, turned-over hotel room for multiple pages, until eventually revealing that it belongs to Suda and finally flashing-back to how he arrived there. His segment here in Omnibus Vol. 5 is a curious reflection on Hideo’s hangups in the earlier chapters, and his lack of self-confidence in the conviction that he was only a bit-part in the story of his own life. Well, right here we have an actual minor character promoted up to the hero and it’s a timely reminder that when you hear about casualty lists in wars or natural disasters being reeled off the news no death is a statistic and each one was the complete script to a drama and a tragedy. It also shows that those people passing by you on the street who you dismiss as the mindless masses have hidden depths and curiosities, for good and ill – one the one hand Suda might be dismissed at first glance as a pasty white-collar weed but his frame is not wispy but leanly muscular with a real knowledge of martial arts; on the other when his girlfriend tells him she’s pregnant he keeps a poker face until he goes off to the toilet to rage about the dumb bitch.

That going off The Pill is a plot point in this part of I Am A Hero before having your fingers bitten off ever comes up is also an interesting return to the slow-burn build-up that also distinguished Volume One of I Am A Hero, where the oncoming zombie apocalypse is a murmuring, barely-noticed undercurrent (Suda watches an online video of a battle against zombies in Korea and assumes that it’s a trailer for a movie) and everyone’s worries and concerns are entirely civilian until the zombies come crashing in like a wrecking ball and smash it all to matchwood. A couple of quieter chapters before the zombie attacks start up again make for a suitable cool-down period after the shotgun shooting gallery of the shopping mall battle in the previous volume, and it reinforces how total the collapse of civilisation has been when all of these preoccupations have had time to be built up before being bulldozed and contrastingly forgotten after the crisis hits, larger buildings make for bigger ruins.

The emergence of the Kurusu Cult also gives you plenty to think about. Kurusu has been referenced a few times in I Am A Hero before now but only in contexts where it could come across as walla and background blather and easily overlooked or dismissed, but now we can see that it’s a real force that’s enjoyed well-planned foreshadowing from Kengo Hanazawa. Their segment of the book has an amazingly absurd irony running through it. You’ve probably heard of doomsday preppers – people who spend all their time and money building a bunker out in the woods to wait out the imminent end of civilisation. Unfortunately, you can’t grab your bug-out bag when someone’s already chewed off your arms. The Kurusu Cult is collecting together the survivors of the zombie apocalypse – who just so happen to be the NEETs, hikkikomoris, otaku and other assorted social rejects who are now the only surviving humans not due to any survivalist skill but because they were cooped up in their bedrooms bent over their computers while all those happy, outgoing, emotionally-fulfilled and successful members of the community were in outdoor crowds getting ravaged by the zombies. It’s a mordant counterpart to the isekai stories that have overtaken anime in recent years where herbivorous milquetoast loners become heroes of the fantasy realm; I Am A Hero is the same, albeit in…starker circumstances. All the while, I accepted this as the right of things, for truly it is written “Blessed are the meek, for they shall inherit the earth”. One way or the other.

I could quibble about how easily the zombies are despatched in the Kurusu Cult sequence:  the previous volumes have all been quite consistent that massively destructive bodily trauma is the only thing that can stop I Am A Hero’s version of a zombie – even the usual shoot-‘em-inna-‘ead doesn’t work, and this volume shows that even completely decapitated heads keep working their jaws and trying to twitch their way to a target – but now a single headshot from a bow-and-arrow appears to put them down. However, it feels churlish to complain loudly because the action here is another fascinating example of both the “clumsy combat” I referred to in my earlier reviews of I Am A Hero and an intelligent reminder of the off-the-wall lateral thinking needed to fight the zombies in other non-American zombie settings without lots of guns such as the one I identified in Train to Busan. When retrieving survivors you don’t go crashing through the neighbourhood in a monster truck battlewagon with dozer-blades and machine-gun turrets riveted to every surface, but hop onto bicycles – which might not be so f**kin’ metal but is a lot quieter when you’re trying to avoid the zombies’ attention. You might also grumble about how well-organised a bunch of Anonymous on 4chan appear to be, but if Psycho Pass can have the Achilles’ Heel of the omniscient surveillance state pegged in a thread started before breakfast I don’t think it’s fair to criticise I Am A Hero.

Finally, Hideo’s own part in this book is the most straightforward of the three in terms of plot and character, but it is the most visually interesting by contrast. The excellent attention to detail and high quality of the series’ translation notes comes up with things like fully-written letters and notices: the calm and rational letter pasted up outside the hospital a prelude to the chaotic horrors within, as Hideo finds that as he goes exploring to uncover among other things a dead pregnant woman being moved like a puppet by her zombified foetus. Disgusting, but grotesquely imaginative in an age where zombies are old hat (even if Suzuki wetting herself is actually more ugly than the undead), and a stomach-churning reminder that horror should be well, horrifying.

And so I’m happy to conclude that I Am A Hero is a complete package. In three different ways – bodily gruesomeness, dark character and grim situations – it justifies its place once again in the top tier of manga horror and merits being returned to this Halloween.

9
A pleasing return to form – the undead eating our brains hasn’t compromised the big ideas.