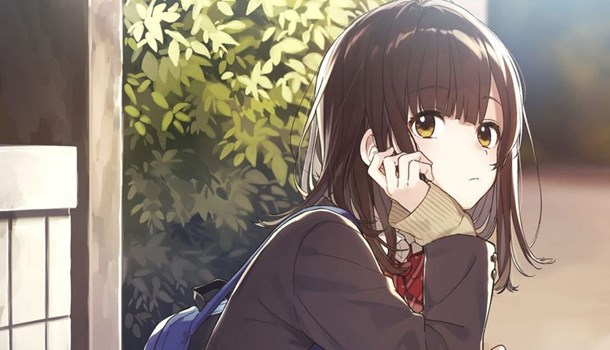 This review almost didn't happen. Not because I got so fed up and tired of the same old trite mediocrity and disappointment in light novels that I stopped reading them, no. I almost didn't have a reason for typing up this review of volume one of Higehiro: After Being Rejected, I Shaved and Took in a High School Runaway is because I damn near dropped it when the protagonist recounts how he was on a first date and kept sneaking peeks at his partner's chest. Wonderful, Higehiro. Just the first page and you've established your protagonist as a creep.

“You almost dropped the book on the first page? Isn't that an extreme reaction, mate?” I hear a hypothetical reader crying. “Maybe that's just a character flaw he works past. He starts off as a creep and ends as a chivalrous, gallant gentleman.”

I would like to believe that, too, hypothetical reader, but across the many, many anime, manga, and light novels I've absorbed into my cranium, perversion is an inborn attribute, not a shortcoming holding a character back in life. The closest any story comes to a character overcoming that fault is Jobless Reincarnation, where Rudeus in volume 2 realizes how forcing himself on others is bad but then returns to hiding in crates and peeping on girls by the following volume. I'm sure there's some story out there where the protagonist legitimately learns to control their lust, but whatever it is, I haven't read or seen it. So in short, I didn't want to read a book whose narrator spends half the page count going, “Boobies! Yeah! Boobies are the best!” Despite this, I powered through because I spent good money on this thing, dammit, and what did my perseverance net me? A completely generic romance light novel.

When a series has a lengthy title like this one does, one doesn't need to provide a synopsis, because the title's got them covered, though the title in this case is a tad misleading. Makes it sound like the protagonist, Yoshida, after facing rejection, abandoned the notion of romance, took up the lifestyle of an ascetic, and swore to help the needful. In reality, he stumbles upon the eponymous runaway after drinking his sorrows away and takes her in because leaving a minor to fend for themselves is a no-no. He doesn't even shave until a few chapters in, when the truant, Sayu, comments on his stubble. But this is all an aside, because aside from the concept of a twenty-six-year-old man adopting a high schooler, the rest of this volume is a case of male wish fulfillment.

See, even though Yoshida's lost in the game of love, truth is that he's got a triad rebound. There's Sayu, who wants to repay him for his hospitality by dropping his trousers, his subordinate, who bucks Japanese work culture by pretending to be terrible at her job and coasts by on her good looks, and his boss, who rejected him but regardless very obviously wants him to drop his trousers. Other than fulfilling the straight man's fantasy of drowning in a tidal wave of the opposite sex, the only reason he has so many women hanging off him is because there'd be nothing for the author to write, since all Yoshida does is work, work, go home, sleep, wake up, work, work, which sounds like an existential nightmare I'd read in an Inio Asano manga, and a narrative I'd entrust only to a writer as skilled as Asano. Literally, every scene involves one of the three females, each of whom is trying to seduce him in one way or another, with the situation surrounding his boss baffling me. It's not the rejection, then flirtation shtick she's pulling. That I can chalk up to not wanting a relationship but still enjoying the thrill of being desired. Rather, what I can't wrap my skull around is that her excuse for telling him no is that she's seeing someone, and then once she starts flirting with him, his obligatory male friend leans over and says, “Bro, I think you got a chance with her.”

That line threw me for a loop. I could've sworn that “seeing someone” was what she said, so I double-checked that I wasn't misremembering things, and sure enough, those were her exact words. It's nonsense like this which is why I don't believe light novels have actual editors editing them, whose job is to catch inconsistencies like this. All the obligatory male friend needs to do is stamp on the boss's rejection for the half-baked excuse it is. One line, that's all we need, and he can't be arsed. Might as well have followed up with a rumor that the CEO is actually three owls in a trench coat and Yoshida wouldn't have asked for clarification.

Though I do have to ask why any of the female characters are in love with him. The reason this light novel spits up is “because he's kind,” but that's the excuse every romance light novel, manga, and anime spits up. Furthermore, applying the label of kind to Yoshida is interchangeable with did not punch me in the face. When I imagine kind, Mr. Rogers, Keanu Reeves, or the Halo multiplayer announcer come to mind. Yoshida does not come within one solar system of being as kind as any of those men. I brought up his perversion at the top but have yet to mention his general dickheadedness and dash of misogyny. Just ask his subordinate about the phallic shape of his brainpan. With his constant vitriol of criticism and berating, it's wild the mental gymnastics she performs to deduce that his heart's really made of solid gold. Sayu has more probability for believing he's kind, what with him sheltering her, and that is an authentically nice thing, letting a vagrant crash at your pad, but I'm amazed she doesn't go Rumi Hidaka on his eyeball when he tells her “You're cuter when you smile.”

“You're missing the subtext of that line!” I hear the hypothetical reader pipe up again. “The underlying meaning behind that compliment is Sayu putting up a front in order to protect herself from the previous men she bunked with, who in exchange demanded sex, and that's no longer necessary now that she's his tenant, so she can let down her guard and smile a more genuine smile. And besides, girls are cuter when they smile!”

Well, I don't disagree with that last statement. I'm more handsome when I smile, or so my mother tells me, but the reason women abhor that phrase is because it reduces them to the role of male pleaser. The male comes along, the female smiles for him, he's instantly happier, and then he sits down in a chair because his knees ache. Women are human beings who live for their own satisfaction, not that of a man they probably don't even know.

As for Sayu's smile becoming the real deal, that's not incorrect, either. Yoshida's well-intentioned in this regard, and he spends various chapters trying to establish a baseline comfort for Sayu so that she can feel at ease and have the things she wants. Where Yoshida fumbles is that he's essentially telling a depressed person the cure to their misery is to just be happy, without first going through the motions of alleviating the causes of their depression, provided treatment's effective.

“Sure, but it's still not misogynistic telling a person you want their smile to be genuine.”

It kinda is when you preface that statement by lamenting that it's a waste to let such a pretty face go to waste, as Yoshida does. Would he tell her she needs to smile if her face were indistinguishable from a boil ready to pop?

“Is that really all the ammo you have to cry misogyny, that Yoshida tells a girl to smile?”

Well, he also laments that he hates when women control the conversation, so take that for what you will. Like I said, it's a dash of misogyny, but by and large, this book's misandrist, too. Any male who isn't the purportedly kind Yoshida isn't a role model. There're the men Sayu slept with, described as garbage with no regard for her and who tossed her back to the street at their first inconvenience, all the higher-ups at Yoshida's workplace, who hired his subordinate for the sole fact that she's cute, and Yoshida's obligatory male friend, who complains about his wife and proclaims that “he loves her, but she's not who he jerks off to.” Higehiro takes the male populace at large and turns them into sex-crazed stereotypes for the sole purpose of uplifting Yoshida and parading him as a paragon of sainthood, when, as I've demonstrated, he's at best a man of average caliber. It's the only way the book can justify Sayu, or anyone, falling for him.

When you remove Yoshida from the equation, though, and enter Sayu's head space, you discover that those men and the nights in their beds wasn't a transaction of sorts, but an ongoing cycle of abuse and others taking advantage of her that when she meets Yoshida, who treats her with basic decency, stirs anxiety within her because she doesn't know how to respond. This was the first moment that made me sit up and think, “Hold up. Is this book doing something interesting? Is it saying something profound? Is Sayu getting naked for a reason other than because the author wanks to two-dimensional teenage girls?” Whether or not this book is tactful or accurate on the effects of abuse isn't something I can accurately gauge or comment on. But Sayu's trauma does remind me of an anecdote I heard wherein a mother went through numerous marriages, none of which yielded partners of stellar quality, and when she met a man who treated her like a human being, it confused her so greatly that she sabotaged the relationship. The book's exploration with Sayu's abuse is brief and doesn't dip more than a foot in, but it's x1000 more commentary on real-world issues and struggles than what most series have to offer. It's almost surreal how the remainder of this book is a harem fantasy.

Higehiro is, like its protagonist, average at best. It does one thing to distinguish itself from its contemporaries, and the rest is the usual drivel you'll find in most other harems, which is a letdown for me, because the premise put this series on my to-read list some while ago, but now that I've gone through it, cover to cover, I'm left feeling like I wasted my wait. Though at this point, that's par for the course with light novels. Something catches my eye, the story and prose makes me want to stab my eyes, then I toss it in a bonfire so that no human can ever lay eyes on it again.

5
After being disappointed, I grumbled and dropped this series.

A part-time reviewer these days of video games.