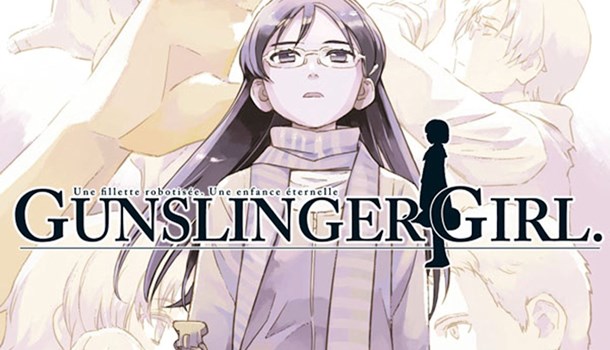 The ending. The finale. It’s one of the most important points in any story and the most difficult to get right. Anime and manga in particular tend to have a bad reputation for endings which can often be rushed due to production issues, made up badly due to adapting source material that isn’t complete or just left totally open, partly through a desire for a sequel that never happens and partly due to the way Japanese culture approaches storytelling. But in the long run, for every Final Fantasy Unlimited or Najica Blitz Tactics there’s a K-ON! or an Angelic Layer that’ll get things right, so perhaps these things balance out in the end. Now it’s time for the Social Welfare Agency to close its doors for the last time but can Gunslinger Girl, which has had an incredibly consistent run of high-quality volumes end on a similar high note?

Picking up as the dust settles at the nuclear plant that was the stage for the high-stakes and ultimately high-cost battle between the Social Welfare Agency and the Padania terrorists, it’s clear that the terrible events of the day are by no means over as elements of the government begin to seize the opportunity to clean house and dispose of the inconvenient remaining cyborgs. With most of the survivors holed up in the nuclear plant it now falls to Claes to take up arms one last time to defend her home.

Aida walks a very fine line in this volume, having to wrap up a story where most readers have known for a while exactly where the ending was headed but needing to keep things fresh and interesting without betraying those expectations. Happily Aida continues to prove to be a masterful storyteller and no-one will be disappointed with what they find here.

In a particularly risky yet brilliant move, Aida has made the decision to strip out action scenes from the volume. Whilst on paper this may not sound great, it’s absolutely the correct choice here as nothing could (or should) top the action from the previous two volumes, and it also means that the focus can be where it needs to be – making sure all the characters get a decent amount of pages to have closure to each of their individual arcs. It’s perhaps due to this that there’s such a sense of weight to everything that happens throughout the volume. There are no out-and-out tear-jerker moments, but there’s a sense of melancholy that’s absolutely palpable as we say goodbye to the remaining characters and realise just how much we miss those that never made it to these final chapters. It’s exactly how I’d always hoped the series would end, yet at the same time it’s also the ending I’d feared as throughout everything there was always a part of me that desperately wanted these girls to have the happy ending that they deserved after what they’d suffered. It’s the fact that the characters are portrayed in such a way as to elicit these feelings that is responsible for the strength of the series throughout its run. The characters are never objectified, simplified or used for fan service in any way, despite the fact that in terms of the story this is exactly what they are. Aida carefully twists and bends your feelings for these girls to the point where you genuinely care about them, which is incredibly difficult to achieve and is utterly satisfying to the reader.

But is it a perfect ending to the series? Well, it’s as near as any series ever gets. Yes, perhaps a little too much of the exposition is given through characters remembering things rather than it being in the moment. And yes, the time skips happen a little too often and the second epilogue doesn’t really fit in with the rest of the story, but these are such minor issues that they aren’t really worth raising. This is an absolutely solid ending to what is unquestionably the best manga that I’ve ever read. Now, if you’ll excuse me I’m going to dig volume one back out and start the adventure all over again....

10
A perfect ending for a perfect series.