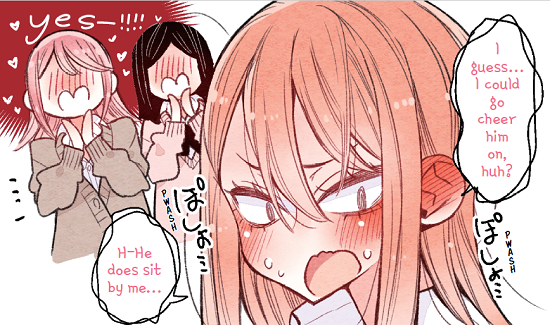 Mizuno has a problem. She has an intense crush on her classmate Katou, but even though their desks are next to each other in their classroom, it may as well be a divide as wide as the Grand Canyon. Love is a big deal, and Mizuno is just so nervous about messing up her chance when she talks to Katou that she just can’t express herself properly. More to the point, though, is the difficulty presented by her own treacherous body because Mizuno doesn’t have big, wide, open, shining cutesy eyes that you can be enchanted by – her slanted, narrow eyes make her look unnaturally fierce, locked in a permanent frown. Scary stuff! Mizuno is all about softness and sweetness but how can she say that when it’s all being choked-out between her furrowed brow?

Just as Mizuno herself struggles with an off-putting expression masking a much more gentle girly-girl underneath, the old adage that you should never judge a book by its cover applies to this volume as well. I have to admit, when I was first assigned this review the very title itself The Girl With the Sanpaku Eyes immediately put me off – not translating “Sanpaku” (a term referring to someone with a narrow, angry-looking phizog) seemed lazy, as though the translator couldn’t be bothered thinking up an alternative that wasn’t just a simple 1:1 vocabulary swap straight from the dictionary. The Girl With The Stuck-On Scowl, I thought, or The Girl With The Angry Eyebrows, or maybe The Girl With The Upside-Down Smile to convey the topsy-turvy attitude not matching the expression. After reading the book though, I can respect it more and better appreciate what David Goldberg was doing by keeping it The Girl With the Sanpaku Eyes. Manga fans are already very ardent about their jargon – witness the petabytes of bandwidth spent agonising over honorifics – and when “kawaii!” and “moé!” are already common currency “sanpaku” is actually very appropriate as it joins them as a sort of cutesy baby-burble that’s spoken like a popping soap-bubble and sets up a light, cheery attitude as you go into the story – and if you could sum up The Girl With The Sanpaku Eyes in any way, it’s definitely “kawaii!” and “moé!”

The Girl With The Sanpaku Eyes is stunning for its complete and total lack of any sort of drama. Interactions between all the characters are perfectly chaste. There are no misunderstandings, no break-ups, no violations of social status wounding people’s pride or snake-like interlopers trying to steal a lovebird away – the biggest crisis in this whole book is Mizuno worrying about which game to sign up for on sports day so she’ll still have time to run over to the other court and cheer Katou on as well. The usual arc of a chapter is that Mizuno will muster up the courage to squeak out a few bare syllables to Katou, and then spend the remaining pages positively squeeing over her unimaginable boldness with butterflies and love-hearts fluttering everywhere like a volcano of confetti. Even Mizuno’s “sanpaku eyes” which are meant to be the centrepiece of the book cause her not the slightest bit of trouble at all: the press pack that I got with this manga said that Mizuno has “something along the lines of a resting b-face” and asks “how can she survive high school with looks that could kill”, and while there may be complications coming in later volumes there’s not a single piece of evidence of this difficulty in Volume 1 at least. Mizuno’s face does not make her socially isolated, as Katou himself is friendly with Mizuno (and as shown in a gaiden chapter which flips perspectives and replays chapter one from his position, he’s even pretty keen on her himself) and Mizuno even has a pair of enthusiastic girlfriends who are happily encouraging her to go an’ get 'im. This is without a doubt the most trouble-free romance that I’ve ever read – in fact the manga is so relaxed that the mangaka’s afterword provides the publisher’s address for sending fan-mail – the possibility of hate or spam isn’t any concern!

I have to stress that none of the above should be seen as criticisms – sometimes in an intense life and stressful world a bit of consequence-free, gentle and soft cushiony marshmallow relaxation is exactly what you need. The art is a big asset to making The Girl With The Sanpaku Eyes work, and especially the fact that it’s full colour. There is more to this than just being a bit of extravagant frippery, and it is essential to setting the right atmosphere of the manga. If this was just a regular black-and-white manga then I probably would have found it to be a bit dull and samey – but the soft pastel colours in warm, soothing orange tones enliven it, perfectly complementing a nature that is thoroughly easygoing.

“easygoing” is the ideal word for The Girl With The Sanpaku Eyes. If you’re looking for high-tension soap opera you’re wasting your time for while this manga’s heroine may have sharp eyes, her story is a yielding soft rounded cushion in which you can sink and relax.

7
Take some time to idly dawdle over a romance that’s plotless, pure and pleasant.