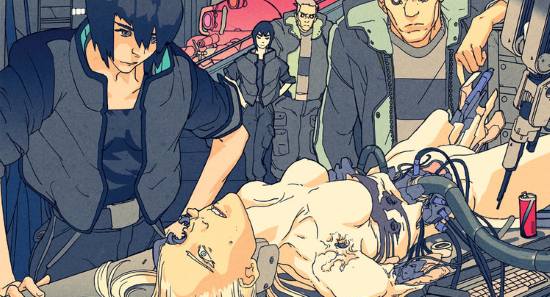 Now this was a pleasant surprise. Global Neural Network is an anthology of stories set in the Ghost in the Shell universe, and on past form when other properties have gotten similar treatments the results can be… shall we be charitable and say variable? Especially when given to creators wit hno prior history with the property. When it’s an iconic franchise like GITS? Handed over to Western creators to create an American comic-book styled collection of shorts? Let’s just say it didn’t inspire confidence.

However, what you get in GNN are four utterly compelling dives into the world of The Major, Section 9, and the world they are a part of. And the best bit is that the various creators involved clearly have a love of the property as each “feels” like a slice of world we have been experiencing ever since Shirow Masamune introduced us to it almost 30 years ago (…..**** that makes me feel old….), yet despite the disparate roads the franchise has taken over the years (the manga, the films, Stand Alone Complex, Arise, the live-action movie) each of these stories just feels right. In a way it almost reads like the sort of stories 2000AD put out when dealing with Judge Dredd and his extended universe.

So lets look at those four stories then shall we?

Aramaki & Kusanagi travel to Shanghai for some covert intel gathering when, inevitably, shenanigans arise… Feeling like an untold tale of the SAC or Arise settings, Automatic Behaviour is a neat espionage tale that sheds some light on The Majors wartime-past and lets Aramaki show off just how tricksy an operator he is. Gladstones writing is on point and Lopez’s art (something I’ve been a fan of going back to his time on Hawkeye & Mockingbird through All-New Wolverine for Marvel) is crisp, expressive, and features some neat flourishes as the story bounces back both in time and from reality to the virtual. There is one twist that isn’t terribly surprising, but it’s made up for by the quality of the writing & characterisation. Understandable why this was the first story of the collection.

An investigation into black-market child cyborg bodies leads Section 9 to have to send Togusa & Saito – the team members with the least modifications – into the backwoods of Deep South. Arguably the closest story to the cases dealt with in the original manga, it poses some questions about what makes a real personality, ethics of using cyborg bodies for children, and how bigotry finds new ways to express itself. It’s always good to see a spotlight on Togusa, but it’s nice to spend a bit of time with stoic sniper Saito as well. Their conversation about the extent of their mods offers insights into both characters, and seeing them somewhat out of their depth in a foreign land is particularly refreshing. Speaking of, this also gives us our first real glimpse of what has become of the (former) United States in the world of GITS, somewhere only really hinted at in prior tales.

de Campi writes a thought provoking tale that gets in some neat action beats, whilst Milonogiannis really channels their inner Shirow - making use of the somewhat exaggerated lines and cartoonish reaction shots that are a trademark of so much of Shirows work but keeping it just the right side of homage.

After The Ball Is Over

Arguably the best story in the collection, After The Ball Is Over stands out for not actually featuring any of the GITS cast we are familiar with. Instead it is set entirely within the fractured US and follows Sofia, a character who represents something of an outlier in this world as we have seen it so far – she has no cybernetic augmentations of any sort so is un-hackable and has nothing to be tracked. Handy as she typically engages in corporate espionage, and for this story as finds herself trekking across the Broken States of America evading various parties interested in the “package” in her care.

The story is really pretty bleak, but it does a fantastic job of dropping you into Sofia’s headspace and the attitude she has had to adopt to survive un-modified in a world where even those at the lowest rungs of society seek out cheap, grey-market mods due to the fact tech is cheaper to repair than meat.

Possibly the most out-there of the stories contained within, Star Gardens place at the end is fitting as it raises those quintessentially GiTS questions of memory and reality within the sort of investigative narrative that the series is known for. It gets bonus points for how it focuses in on the different incarnations of The Major that the franchise has presented over the years with some standout scenes where her visual appearance flits between several of her looks within one scene. LANZ’s fractured, dreamlike artwork does wonders here in serving Fletcher’s script, which has a great pay-off at the end

So overall four stories all of which are actually pretty good, if not outright great. That’s a decent average by anyones book. The creators are all clearly familiar with the world of Ghost in the Shell, and have put in the effort to create a fitting tribute to a setting that is hugely important for the impact it still haves to this day.

The book itself is well presented by Kodansha as a traditional US comic-styled hardback, with a great, ethereal cover by Dustin Nguyen that calls back one of the more iconic images of Motoko Kusanagi. If I had one criticism however, it would be that I’d have liked have seen more pinups like the one by Becky Cloonan used on the contents page, possibly a full gallery in the back by a variety of artists giving their take on the world of Ghost in the Shell. I can understand why they have not, but it feels like a missed opportunity when booking out a book that is so attractively put together otherwise (especially for the price being asked).

8
A neat dive into the world of GITS and a fine tribute.