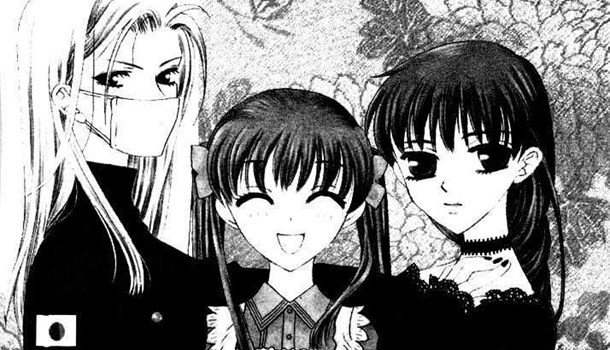 Fruits Basket is one of my favourite anime series, based on this manga by the talented Ms Takaya. I had high hopes for the manga, and was curious to see how much influence the anime really took from its source.

The answer is a lot.

The anime follows the books almost to the letter, and its amazing to see that even camera angles and costumes are faithful to this source material. However, there are subtle differences and even some surprises to be found, which make the experience much richer.

The fun is in all the minor details the anime skips over -for example, here we discover that Momiji is actually half German, which explains the blonde hair! He also talks in German when he's excited, and it makes him all the more endearing. There are similar subtle shifts for the other characters, such as Shigure's slightly more sinister nature, which fleshes out his character somewhat. Every volume of this first batch allows the reader to discover some more secrets about the rest of the cast - its like playing a video game the second time around just to find all the hidden items ^_^

The artwork is delicate and the panels flow well (once you remember to read it backwards as is the norm for these 100% manga titles). The touch up for the translation is well handled, and even the authors notes get translated (even if they don't make a huge amount of sense since she's a games nut who talks a lot about games we don't get over here!) They don't add anything to the story, but its nice that Tokyopop took the time to translate everything.

If you're looking for something new in the Fruits Basket manga, you won't find anything wildly different from the anime, but the few gems that are here really do make it worth visiting the story again - coupled with the fact that the manga carries on past the animated series abrupt ending, and that there are a few more characters in this version, you get a richer experience that leaves the door open for something new later in the series run - fans of Furuba really shouldn't miss it ^_-

9
Contains everything that made the anime such a treat to watch, and fleshes out characters and events to an extent that make it a must read for fans