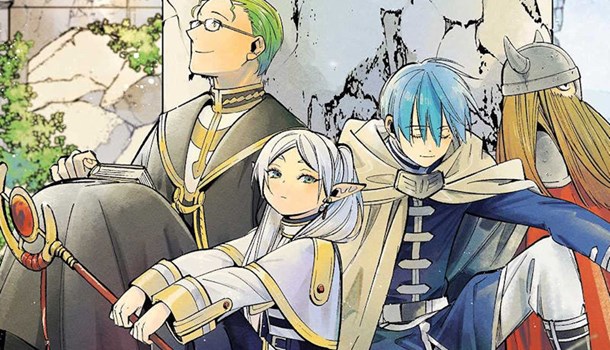 Frieren is the titular heroine of this manga, an Elf with a long lifespan who adventured for 10 years with a band of heroes who banished a demon lord. Having completed their quest, the heroes part ways, and agree to meet in 50 years. A blink of an eye for Frieren, but the end of days for her teammates, who upon parting remark upon the elf's inability to fathom time the way they do.

50 years pass, and sure enough the friends have aged as expected while Frieren remains youthful. As each of her companions passes away, she starts to wonder about the nature of mortality and her own thoughtlessness towards the mortals who cared for her.

It's an interesting take on the fantasy genre, comparing the timelessness of one race against the fleeting years of another. It's not quite as epic in scope as To Your Eternity, but as an examination of one character and their relationship with those around them, I found Frieren to be very compelling.

Taking on a young charge, even the first volume shows the rapid growth of the student compared to the master who simply doesn't register time in the same way. Where Frieren endears itself is in taking our elven heroine on a spiritual journey to better herself and try to take in more of what's going on around her. Inspired by the legacy of heroism and sacrifice of her former team, Frieren tries harder to live up to the ideals of people who were friends who thought so much of her over their 10 years together even if, for her, it was nothing more than a fleeting moment in time.

By the end of volume 1, Frieren is convinced to locate heaven and commune with the dead, a goal that was seemingly set for her 1,000 years ago by a previous acquaintance. The melancholy tone of the book offset by some nice moments of levity and humanity, and I'm genuinely invested in the journey ahead.

Tsukasa Abe's artwork is expressive and features plenty of tone to give weight to the imagery, with his double-page spreads being particularly pleasing. The expressions are full of life, and even the incidental and background characters have plenty of variety and thought put into them. Overall it's very pleasing to look at and easy to invest into.

For those seeking a frantic pace or impressive fights, Frieren isn't going to do much for you. It's a slow character piece that takes its time and builds the emotional punches slowly. It's a surprisingly mature read in this regard, but fans of considered drama will find much to enjoy in Frieren's journey of self-discovery.

9
Surprisingly considered and thoughtful, Frieren is a welcome change of pace.