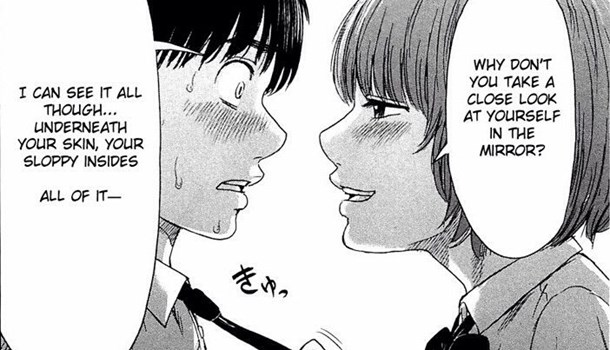 With its animated adaptation having proved to be one of the major talking points of the spring 2013 anime season, on account of both the show's style and its substance, it seems like there's never been a better time for us to pay a visit to the source material from which this series was born to see what it offers in its own right - a simple task, thanks to Vertical's English language releases of the series.

In a sleepy, isolated Japanese town, we find our protagonist Takao Kasuga in a decidedly typical teenager - introverted, self-conscious, but with delusions of grandeur regarding his own superior intellect compared to those around him. After all, he reads Baudelaire, so he's clearly a cut above his peers, right?

That said, there is one person who Kasuga has placed upon a pedestal - Nanako Saeki, a classmate of Kasuga's whose intelligence and beauty gain many an admiring look, and none more so than from Kasuga himself, who imagines her as some kind of perfect "angel". He is, of course, far too introverted to do anything other than admire her afar - at least, that is, until a moment of madness turns his life on its head, as a snap decision in an empty classroom leads to him stealing Saeki's gym uniform in a heady blend of perversion and panic. Still, at least the classroom was empty so nobody saw him, right?

Of course, this proves to be incorrect, and he couldn't have been spotted in the midst of committing his deed by a worse person - Sawa Nakamura, the maladjusted class troublemaker who makes no bones about blackmailing Kasuga to do her bidding in return for her keeping quiet. Ostensibly, Nakamura's goal is to get Kasuga to open up to him and confess his inner desires and nature - something which leaves Takao trapped like a rabbit in the headlights as he's caught in an ever-deeper spiral which swirls around himself, Saeki and Nakamura.

On the surface, this means that these opening two volumes of Flowers of Evil are a concentrated stream of overblown angst and drama, yet dig below its brash surface and you find something entirely more personal and genuine - an uncomfortable, unabashed dive into the adolescent psyche that lays bare the traumas and tribulations of puberty and the faltering steps towards adulthood that come with it. So awkward are the interactions between these characters as they struggle to relate to one another or look to seek out or shun attention that you'd be hard-pressed not to remember some of your own uncomfortable teenage struggles, and it's here that Flowers of Evil is at its most effective - if you've ever had a teenage crush or worried about being ostracised by your classmates, you'll have an innate understanding of this series and its characters, and chances are you'll be squirming in your seat as those memories blend with what is going on within the panels before you.

Speaking of those panels, the art style of Flowers of Evil might not blow you away in broader terms but it nonetheless fits the aesthetic of the story perfectly - detailed backdrops give you a feeling of place within its sleepy Japanese town, while character designs eschew some of the more normal manga styling to give a more believable edge to proceedings; doubtless the vibe that the anime adaptation picked up on which led to a decision to rotoscope live-action performances rather than animated the series entirely.

With a strong translation and slick presentation to round things off, these opening two volumes of Flowers of Evil are an impressive thing indeed - this is a manga unlike any other, that offers a drama and emotion-laden story that still succeeds in being a far more realistic view on adolescence than the vast majority of other school-centric manga series. As a result, this is a must-read series - provided you can stomach the dredging up of embarrassing teenage memories of your own, that is.

9
A superb start to this series, which sets itself apart from other school-based manga and does a great job of capturing the awkwardness of puberty.