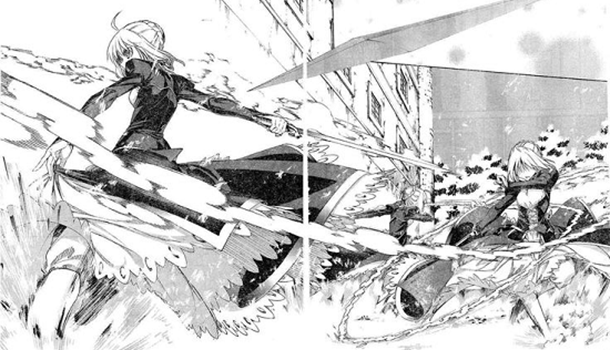 When you're talking about adaptations of older works in a different medium, a word that you'll keep hearing over and over again is "authenticity".  Adaptation is related to that other thorny and intractable issue of the anime and manga sphere - translation - in that it can never be an exact science and that efforts are better invested in conveying the spirit of the work than regurgitating a tone-deaf and obtuse transcription. Nonetheless you'll have admirably earnest but sadly misguided fans who've convinced themselves that they're showing loyalty to their favourite title by demanding a literalist re-issue at all costs and against all reason. This attitude is caring, but it's also smothering. At best it burns out fanbases with wasted heat and at worst it has sabotaged shows both as notorious as Garzey's Wing and as beloved as Lucky Star.

As you can tell I don't approve of the 'authenticity' mindset. If you want something exactly like the original, then why not just read the original? While other people coo and cluck over how "faithful" the adaptation is, I only see that I'm being charged twice for something I've already seen and so ultimately that I'm being ripped off. I actively encourage adaptations to take departures from the source material - whether it be expanding the canon with side stories, providing more meat to chew over with additional scenes, or just enjoying the new spin of a what-if scenario, I am getting to enjoy new content for my money instead of a greasy warming-over of what I already know.

However inauthentic this attitude may be, it's an important one that's necessary to properly appreciate adaptations in manga. Anime and manga adaptations never have an even comparison - an anime adaptation of a manga or light novel will always have an easier time of it because if nothing else it'll have the additional eye candy of full colour, music and action to compensate for any flaws. Sadly, and however superficial it may seem, the fact remains that a manga version that arrives after an anime will seem dry, hollow and all too grey without these bells and whistles. An adaptation into a manga absolutely must strike out with a distinctive take on the title to generate new interest, otherwise it will always suffer by comparison. It's something I criticised the manga adaptation of Kill la Kill for last year and I'm afraid that it's something that today will also bring down the manga version of Fate/Zero.

The sprawling and ever-expanding "Nasuverse" and the multimedia avalanche of its flagship Fate franchise surely need no further introduction, but newcomers to games and comics of the Type-Moon doujinshi circle should understand that Fate/Zero is a modern urban fantasy and a prequel series to the original Fate/stay Night visual novel. Fate/Zero was originally a light novel mini-series written by Gen Urobuchi - a household name since his memorable work on Puella Magi Madoka Magica - which has had both anime and manga adaptations. Zero is set a decade before the events of Stay Night and depicts the struggles of the Fourth Holy Grail War - another clash in the generational contest between the great mage families of the world to gain control of a magical wish-granting chalice. These sorcerers summon 'Servants', new incarnations of ancient heroes of myth and legend, to be their champions in the battles over the grail - and with such titanic figures crashing together it's a tempestuous and fatal conflict that no-one would submit to unless they had a truly ardent (or very desperate) desire so intense that they would risk death and much worse to achieve it. Two such masters arrayed against each other in the Fourth Holy Grail War are the grim assassin Kiritsugu Emiya and the Church inquisitor Kirei Kotomine - and their battles will scar the grudges that play out in the events of Fate/stay Night.

That "dry, hollow and all too grey" criticism that I made before the synopsis is easily demonstrated in the scene where we first meet Kirei Kotomine. In the anime he is conscripted into the Holy Grail War in a fascinating monastery with portentous red architecture set amidst beautiful Italian countryside... and in the manga he's sitting in an apartment living room so bland and empty it has square ceiling tiles like an office building. In the anime the Assassin Servant's infiltration of the Tokiomi mansion was an elaborate and elegant gymnastic dance dodging traps and alarms until he was baited into an ambush, but in the manga he's so inarticulate he's annihilated at one glance - which undermines a later reveal which in the anime was a shocking twist and a thrilling escalation to the game, but in the manga makes you scoff at it as a waste of ink. I have to say that the art isn't all bad - it's entirely competent throughout and has a few attractive scenes such as the grand and tremendous summoning of the black bulls that draw the Rider Servant's chariot, and Irisviel gets some rather nice smirks and sneers in her expressions that give her more vim and determination than she ever had in her more simpering depiction in the anime - but a lot has been lost in the cropping from widescreen anime to confined manga panels.

The manga has also made a misjudged decision to start in medias res at the final crisis and then tell the entire story in flashback. This is not in and of itself a bad thing and has been done in memorable anime like Berserk and Gungrave, but Fate/Zero has catastrophically fumbled the implementation. The other shows made this work by quite consciously avoiding any exposition or scene-setting in their opening episodes so that you always stayed interested following the mystery and speculation of how the characters were going to end up in the radically altered state we saw at the start, but the Fate/Zero manga undermines itself by accompanying this prologue with an overblown narration which probably thought that it was being being ominous and atmospheric but just tells us what the problem is before we've even started. Similarly Kirei's existential crisis, which steadily deepened and blackened as the anime went on in an awfully compelling collapse, here is just laid out in a single page of exposition. It's not so much the Fate/Zero manga as it is the Fate/Zero Cliff Notes.

In that sense,  I only wish we'd been treated to the more interesting prospect of the original unabridged light novel series in English instead of this half-digested experience, chewed over like cud twice in a reduction to an anime then a further reduction to a manga. Both Yen Press' running of multiple titles and Vertical's release of Kizumonogatari have proven that there's now a sustainable market in light novels, and even if light novels are a harder sell the brand recognition of both the Fate franchise and Gen Urobuchi would have easily overcome that inertia.

Unfortunately that's a wasted opportunity and this is a waste of time. For anyone who isn't a dedicated Type-Moon completionist there really isn't any reason at all to buy the Fate/Zero manga. From this first volume, it just doesn't do enough different to set itself apart from the anime version, and the few changes it makes that aren't just paring down the action are too hit-and-miss to sustain interest. I wouldn't even recommend this version of Fate/Zero as an introduction for new fans: the manga series is more than ten volumes long and if it goes the whole distance you'd be spending well over £100 on volumes, but you can get the same content for half the price and a tenth of the shelf-space on MVM Entertainment's Blu-Ray edition, or even just stream it on Crunchyroll and get it for nothing.

4
A competent but completely redundant adaptation that offers nothing that the anime hasn't already given you.