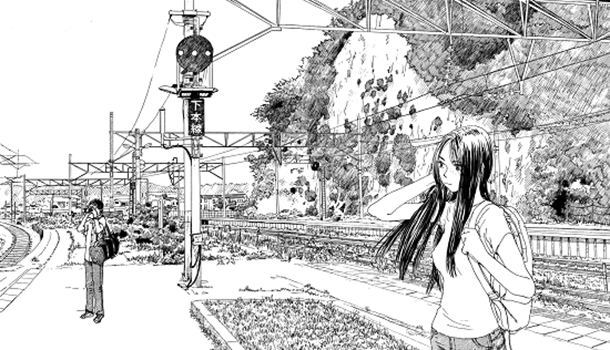 Typical – you wait for ages and then three turn up at once!

Manga artist Kenji Tsuruta is notorious for his glacial drawing pace and his habit of drifting off and losing interest in projects after a few chapters so that many of his manga rarely progress beyond a single volume – even his editor at Dark Horse admits as much in the footnotes. As a result when I reviewed Wandering Island I was pretty dismissive of the prospect of ever seeing a follow-up – a cynical smart-alec attitude which now leaves me looking rather shamefaced and foolish, for not a few days after filing my recent review for Emanon not only did I find an English version of Wandering Island Volume 2 on the shelf in my local Travelling Man store, but I discovered that no less than two follow-ups to Emanon itself were already bound and printed and waiting to be read!

Given that sequels are such a rare treat from Tsuruta, it seemed churlish to decline the opportunity to dive into them. I found the first volume of Emanon to be a thoroughly engrossing tale – but have we drunk the extent of a shallow pool or is there a vast ocean of depth beyond into which Volumes 2 and 3 can be thoroughly immersed?

As I mentioned in my review for the first volume, Emanon is a manga adaptation of a novel series by Shinji Kaijo, and the heavy lifting of thinking up a story being done for him may have been what’s helped the series last uncharacteristically long for a Tsuruta manga. Shinji Kaijo is an award-winning author in Japanese but he’s virtually unknown in English – other than the Emanon manga, the only other works of his to exist in translation are a small handful of short stories peppered across anthologies published by tiny part-time outfit Kurodahan Press (plus, fairly randomly, the Internet Speculative Fiction Database tells me that he had a couple of short stories translated into Hungarian in the 1980s), so it’s worth looking into Emanon just to help a small voice turn up the volume. Subtitled “Emanon Wanderer, Parts One and Two”, Volumes 2 and 3 of the Emanon manga are partial adaptations of Kaijo’s sequel novel bundling up a range of follow-up stories from the 1983 original: there is a fourth manga volume completing Part Three of an “Emanon Wanderer” trilogy but no indication yet if it will make it Westwards – the footnotes to Volume 3 claim that Dark Horse is negotiating for an English release towards the end of 2020, but as volume 3 came out in late 2019, who can say how those plans have been led astray by the subsequent eruption of the Wu Flu? At the very least, there’s not yet any mention of volume 4 on the Dark Horse website and they never responded to my email inquiring about updates. In any case, the absence of volume 4 is not too great a problem – “Emanon Wanderer” is told in an episodic manner and the encounters across time shown in these two volumes are self-contained enough that you don’t feel as though there’s a hole in the narrative.

“Emanon Wanderer” shows events from Emanon’s lives both before and after her encounters on the ferry and at the train station during volume one. As she drifts around the foothills and villages of rural Japan, we observe her following her inscrutable road – and how that seemingly eternal path is suddenly led astray when the same routines that she has maintained for millions of years without interruption are very violently dragged off-course. Emanon has lived since the very dawn of time and so you would think that she has seen all there is to see, but even Emanon can be surprised by new intrusions that have never come up in eons.

“lives” was not a misprint earlier. “Emanon Wanderer” is a different experience to the original Emanon – something reflected in the text of the original stories too, as Emanon was only ever intended to be a one-off which spoke for itself and sequel stories only followed in response to reader demand. As a result, volumes two and three don’t really engage with the existential questions of purpose and how we can accept ourselves as fulfilled in life, and is instead more interested in elaborating on the actual mechanics of Emanon’s existence. What are immortality’s logistics? We see how Emanon has not lived as a single being, but rather is an infinitely long chain of succession – every generation she will seek out a partner and give birth to a daughter, who then inherits Emanon’s consciousness and memories while the mother becomes hollowed out and vacant. We also find out about how Emanon occupies herself across the ages, burying supply caches for her future self to dig back up decades later or even becoming a sort of macro-ecological gardener, dropping in a seed every few centuries to delicately nudge an ecosystem back into balance. Following the discussion between “soft sci-fi” and “hard SF” in my earlier review, Emanon also dabbles her toes in the former: she travels with another woman and it’s strongly implied that she’s a time traveller – it’s never stated outright, a TARDIS doesn’t materialise on the page or anything like that, but references to dates in dialogue after they split up make it clear that generations of Emanons are meeting her across time. There’s also the first laying-down of plot rails instead of directionless ramblings as Emanon meets someone with actual psychic powers, a firebug who can make objects spontaneously combust by intensity of thought, with implications for the ineffable cosmic purpose that Emanon herself upholds. Incidents like these are fun to chew over as a pure exercise of imagination, a world-building thought-experiment, although they do lack the ruminative and thoughtful depth of the original – something given away by the afterwords, which are still present in volumes two and three but are much shorter than the commentaries in volume one as there’s less to talk about (although what there is remains interesting, particularly decisions around translating Emanon’s assumed name in volume 3).

After setting up the routine of Emanon’s existence, the latter part of Volume 2 and the whole of Volume 3 are given over to tweaking the concept and pitching her some curveballs. Emanon is a self-reliant sort and is used to standing on her own two feet as a precocious child when her old mother-bodies just fade away into a vegetative state, easily discarded by the new Emanons like a moulting. Then, one generation, she is born with a twin brother – a shocking thing to her which has never happened before and a complication she promptly ignores by dropping him off at an orphanage. The resolution to this encounter when brother and sister meet each other again years later I found to be entirely disappointing and unsatisfactory. The brother is suffering from abandonment issues but Emanon’s distant, unknowable, inscrutable attitude as someone who cannot relate to him as she lives on a geological time scale is just a complete character break. We can see clearly in all the chapters surrounding this event that Emanon is fully personable with everyone around her, and her total witless abandonment of emotional literacy here just seems lazily contrived for cheap drama. I don't accept the excuse that Emanon doesn't know how to deal with a brother either - everything else about her says that she'd welcome the novelty after eons of tedium, so why not when the opportunity was finally there? It even picks open a new plot-hole – in Volume One Emanon did mope a bit about her lack of purpose in life, but we can see with her ecological stewardship’s she’s been keeping wheels turning over literally millennia so she seemed to have it all figured out. Volume two’s back half thus unfortunately is a low point of the series.

Volume three is a more sedate affair – the basic premise is another twist in the tale, this time asking how the girl who remembers eternity copes when she loses her memory. While the end result of a slow and largely untroubled romance where she partners with the passer-by who takes her amnesiac self in might seem bland and unambitious, and overall the whole volume might seem to be little more than a laboriously protracted way of filling in the plot-hole of Emanon’s mother not being a vegetable at the train station at the end of volume one, nonetheless I enjoyed reading it. Its languid, unhurried style is suitable for showing the stretching of time as Emanon starts reflecting on whether she might finally settle down, and while you might call it “slice-of-life”, that doesn’t mean it’s the typical moé cute-girls-doing-cute-things carousel but is instead replete in comprehensive observational detail of rural, small-town Japan. It reminds me a little of Wandering Island, and the irony that the gorgeous Pacific islands were technically suburbs of Tokyo – avoiding the big metropolis gives you the space to sink into every line of wood-grain. Even when volume 3 references a real historical event it’s not a big obvious global turning-point but a very particularly local one. Even if you could accuse volume three of being inconsequential, it ends with a delightful epilogue where the new daughter Emanon is surreptitiously reorganising behind her disorganised father the same way her mother-self used to, framed in a panel where she’s cut off in the corner by stacks of books that have been allowed to pile up in their once-tidy home again which was hilarious enough to make it not matter.

If you were tantalised by Emanon’s sweater puppies and snug jeans in volume one then volume two rewards you for your patience and gives you the goods, as she spends nearly the entire first third of the book sauntering around forests, rivers and bath-houses entirely as God made her - in glorious full colour! Joking aside, there is still a good deal of male and female nudity in these books so even though Emanon is a literary manga take care before bringing it to your book club unannounced. Nonetheless, it’s fair for Black Horse to boast on the blurb on the back of volume two’s cover that there are “72 pages of fully painted colour” – they have put a laudable amount of effort into the presentation of each of these volumes and with the large amount of colour art inside them, not to mention good-quality paper stock, it’s impressive that they remain a relatively affordable £9.99. The black-and-white pages don’t stint on the photographic level of illustrative detail either – the “Emanon Wanderer” books are attractive and I hope that the economical price helps open up Emanon to a bigger readership because just as the pages are sunk in with watercolours so too are Emanon’s ongoing adventures absorbing.

8
Although not invested with the thoughtfulness that made the first volume so memorable, the Emanon sequels remain beguiling rambles through the hinterlands of Japan.