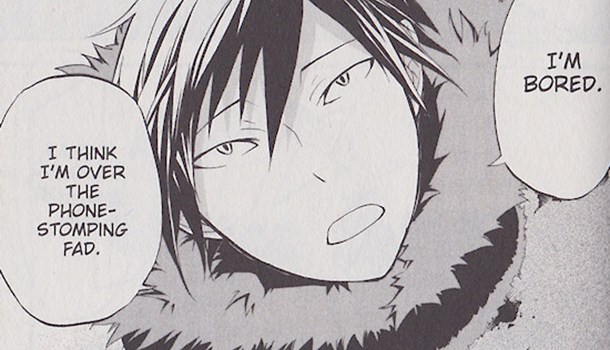 With so many characters to introduce and bring to life within its bustling Ikebukuro setting, the first volume of this manga adaptation of Ryohgo Narita's series of Durarara light novels proved to be decidedly proficient and distilling its initial concepts and major plot points down into an easy to digest reading experience.

Thankfully, this early hard work pays dividends here as we reach volume two - sure, there are still some characters to introduce or fill in the back story of, but we're sufficiently au fait with most of what's going on to allow us to simply sit back and enjoy the ride.  As you might expect, a fair amount of this volume focuses on the mysterious headless "black biker" Celty, taking us into her past and her difficult to read emotional attachment to Shinra, and also the creepy yet beautiful disembodied head in the hands of a pharmaceutical company and its own oddball employee.  Needless to say, we're all set for those two aspects of Durarara's story to tangle and combine, but with plenty of other incidents also at the forefront of life in Ikebukuro there's no shortage of material to get our teeth into here.

If we were to make one complaint about this particular volume of the series, it's that when you sit and look back upon what you've just read not a huge amount actually happens in terms of making significant progression to any one aspect of the story - it's a natural disadvantage of the density of Durarara's world, you could argue.  Luckily, even this potential complaint is mostly rendered irrelevant on account of the fact that the volume is still in turns intense, fascinating and fun, relying on the strength of its weird and wonderful characters at this stage rather than nuances or progression of its plot.  The rapid pace of the volume also helps to alleviate any concerns that there aren't any major events occurring - everything breezes along at an impressive clip, switching quickly from one scenario to the next to ensure that it always keeps the reader (and their brain) engaged.

Although we weren't completely sold on the manga's art style for Durarara's opening volume, this second instalment does sit better with us - its artwork seems more consistent and generally a little better overall, and we've probably simply grown a little more used to its particular treatment of the franchise's characters.  This is, of course, overlaid with another solid and energetic translation effort from Yen Press - aside from one decision to change an admittedly throw-away reference to nod towards another of their own releases rather than a less well-known manga, it's a top-notch effort bolstered by translation notes where required and given a suitably high quality presentation complete with shiny title on the front cover for the manga magpies among us.

Whether you're a newcomer to Durarara's imagining of Ikebukuro or you've arrived at this manga release from its excellent animated outing, this second volume confirms its place as an important part in that particular universe - even series creator Ryohgo Narita has admitted that its depiction of certain events have shaped his own work on future light novels.  Perhaps more importantly than that however, this adaptation remains an entertaining and fast-paced character-driven affair that's intelligently presented while offering something for everyone thanks to the broad scope of its story.  If it manages to continue in this vein, it's shaping up to be one of our favourite English-language manga releases of 2012.

8
Another well-presented slice of Ikebukuro life, carried largely by its fantastically colourful roster of characters.