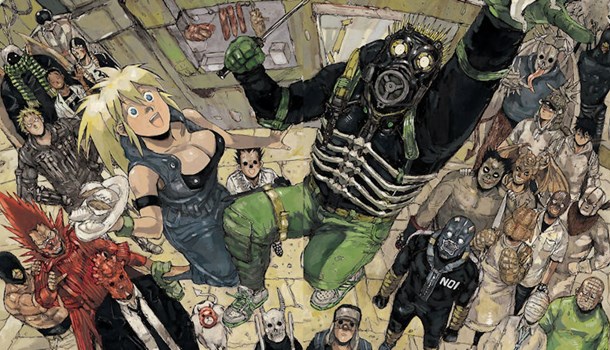 Sometimes, you find a piece of media that delights you to such a degree that it makes you lose all track of time. Dorohedoro did just this to me - once I reached the end of volume two and had put the book down I suddenly realised that the series had eaten my entire evening and had made me very late for a night out with friends. Oops. It was worth it though.

Dorohedoro is a straight up tale of revenge - Caiman is seeking revenge on a sorcerer who robbed him of his memories, mutated his face to that of a lizard, but had the good grace to make him immune to further magic at the same time. Aided by his good friend (and capable ass-kicking chef) Nikaido, Caiman hunts down the sorcerers who enter his dilapidated cityscape home, lovingly known as “the Hole”, to partake in human magical experiments, trying to find the one who disfigured him in the hope of killing them to undo the damage. On the other side, a small band of sorcerers are trying to find out about the bizarre person who has been hunting them, and why he is immune to their normally devastating (and downright unsettling) magic.
All of the characters are downright awesome, with each having their own clear drive and goals guiding their actions that cannot be denied, even if they are unsavoury in some cases. The sorcerers, in particular, can come off as having downright psychotic personalities, although thankfully this is never a bland case of someone being evil for the sake of it. One chief complaint I have with the cast is that Nikaido, who is generally portrayed as a badass who can quite easily handle herself in a fight, gets turned into a damsel in distress far too often for my liking. A lot of the time it is used as a plot device to build tension, but the sheer number of times that the character oscillates between stone-cold badass to endangered maiden is somewhat jarring. Even with its flaws the series succeeds by constantly fleshing out the characters, with each subsequent event enriching them and making them all the more interesting and (most importantly) fun to follow.

The series paints such an effortlessly stylish and attention grabbing world that I was unable to escape once it had enslaved me. Every page is dense with interesting details and careful, well-considered backgrounds, so much so that every element and character portrayed within Dorohedro almost screams "Oh, the things I have seen! The things I could tell you!” The sheer level of thought and consideration that has been poured into the admittedly generic “dilapidated city” setting of The Hole really helps to ground the series in a credible setting, overcoming the danger of slipping into cliche. Shop signage, members of a crowd, ramshackle buildings and the like all sport great design and feel like parts of a coherent whole, filling in the background.  The side stories provided at the end of these two volumes are especially good at fleshing out this atmosphere, revelling in it with light-hearted humour while teaching you a lot about the world that would be cumbersome to inject as exposition in the main plot.
The impact of the design is further enhanced by the art - the level of detail and care on show is impressive. Everything looks dirty, scarred, broken and generally worn out while remaining part of the overall design aesthetic through careful construction, letting it all come alive on the page.  The author, Q Hayashida, is a former assistant of Tsutomu Nihei (who I am already a massive fan of, admittedly), and this influence is immediately visible in the amazing architecture on display. Thankfully Hayashida has not inherited Nihei's lamentable habit of drawing characters wall-eyed and instead manages to imbue her characters with a great deal of love and care, keeping them on-model and expressive whenever they are in-panel.

One of the biggest pluses to me about Dorohedoro is its pacing. I never felt like the storyline was at a standstill for the entire time I was reading - even the quieter moments or asides were active in furthering the atmosphere, the plot or the characters. The constant forward momentum of the storyline really helps to balance out the density of the art and atmosphere, preventing you from feeling bogged down in details and exposition or, God forbid, bored. There is even one particular chapter featuring zombies (am I the only one absolutely fed up with these buggers?) which starts off as a light hearted aside, then just as I was getting used to "zombie story with a slight twist #445" events were sent barrelling right back into the main plot line, surprising and delighting me with equal measure. There are a number of great fight scenes in Dorohedoro, and these also benefit from this fluid pacing, letting you easily follow the fight in progress but also a have a great deal of added impact. Attacks look genuinley viscious and injuries are appropriately painful and/or sickening- after reading far too many manga where the fights are confused and aimless Dorohedoro feels like a blessing. In particular the magic used by those who wield it is shown to be truly a fearful thing - this is no "magic missile" style nonsense but instead a devastating power rightfully feared by the cast as it can do terrifying things.

Dorohedoro managed to do something that is happening less and less as I find myself with less free time: it swept me up and carried me away for the entire duration I was reading. The series is an utterly enjoyable romp - everything moves at an enjoyably brisk pace and still remembers to give you plenty of meaty plot and backstory to chew on and speculate about.  Every time I put the book down I felt genuinely excited about picking it back up again.
9
A violent, blood-drenched romp with a surprisingly engaging storyline and the best lizard-headed character I have ever met.