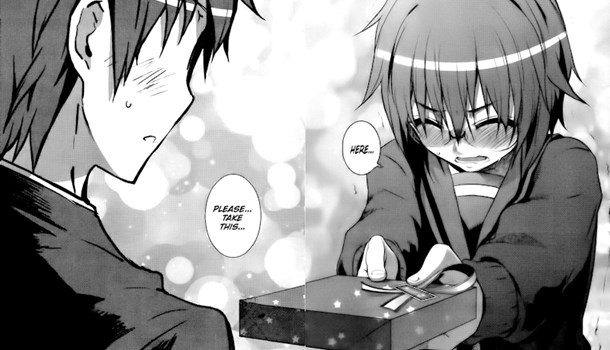 Having self-prescribed myself the role of UK Anime's "Haruhi stuff reviewer", I was frankly shocked at my own dereliction of duty when I found out that two whole volumes of The Disappearance of Nagato Yuki-chan had been released without my notice. A new series by a creative team I like, focusing on my favourite character? Clearly I had to rectify this discrepancy, and then write a review about it. So here we go.

The premise is refreshingly direct - cripplingly shy literature club girl Yuki Nagato has a massive crush on fellow club member Kyon, but can’t possibly muster up the courage to tell him this even with the constant urgings of her best friend Asakura. Will she be able to tell Kyon her feelings, or will her nervous withdrawn personality damn her to inaction?

Disappearance is an alternate universe retelling of The Melancholy of Haruhi Suzumiya, branching off from the events of the fourth book and the movie of the same name. In doing so, it retains most of the cast, with some members having more or less of the spotlight and in some cases slight personality or attitude adjustments to adapt to the new setting. The series is also structurally different, as instead of being an adventure with a dollop of sexual tension this new outing is more of a straight anxiety-and-misunderstandings based romantic comedy. This new series also puts in the legwork to make itself approachable to people who know little to nothing about the franchise's source material - while prior knowledge helps bring out some irony in the humou, it's not critical to enjoying it. If you wanted to, you could just jump in and read this series on its own.

Written and drawn by the same tag-team who brought you the wonderful series The Melancholy of Suzumiya Haruhi-chan, this series also has a lot of the elements I really enjoy about that sillier, comedy-based offering. First up, they really know the source material and the characters well, and so also know how to subvert or adjust them in a believable fashion for their new environs. Secondary characters in particular get a new lease on life and have a lot more presence for many of the events, feeling a lot better integrated into what is going on. Mikuru, the character that is explicitly included to be eye candy, still has zero impact on events and this fact is liberally mocked, maintaining her perfect record. While the majority of the cast shines in their new roles, it isn’t a perfect fit and I’ll get back to why shortly. The creators sense of humour also crosses over intact, which provides some welcome levity and some great gags to the series, while remaining restrained to a degree that sets it apart from Haruhi-chan and the original.

Another thing that transfers over is the fluid and recognisable art styl- much like Haruhi-chan the characters level of detail fluidly changes from panel to panel, which is a great emotional barometer and vehicle for jokes. Being a slightly more serious and emotionally involved story, the art is often in the more detailed end of the spectrum and honestly looks great. Character emotion shines through and really helps brighten up both the dialogue and the many moments of quiet fidgeting, which is the bulk of the “action” in the title. The layout and panelling is notably rather plain, but this is easily offset by some great set pieces and double/single page spreads. These really help to give landmark moments in the series an extra punch to elevate them towards being something rather special.

While the presentation and the comedy are top notch, the romance aspect of the series is notably lacking for the majority of these first two volumes. To revisit a point made paragraphs ago, two of the characters do not really survive with their charm intact in the transfer to this new series, and sadly they are the main characters themselves, Yuki and Kyon. You know, the main couple-to-possibly-be that the series is about!

Yuki is not the same character you may remember or expect from the novel/movie which set the standard for this series - she is chronically helpless in her actions and thoughts while also simultaneously being an airhead and at times rambling in speech. The cynic in me wants to say that these character adjustments were done to make her more “adorable”, but even if not it can make her an exasperating heroine to follow. Kyon is another major departure that is slightly harder to pin down - until now he has been the audience’s main contact with the world, a sarcastic jerk with a heart of gold tour guide. Now, he is both firstly more content for the most part so has less to grumble about, and secondly is no longer the point of view character any more so we have been stripped of his inner monologue and sarcastic quips. These combine to make him a much more bland and at times invisible character, removed of the facets that make him and his interactions with others interesting. This starts to be corrected for the better towards the end of the second volume of Yuki-chan as his personality starts to get filled in, and hopefully will continue.

Another issue for the bulk of these first volumes, exacerbated by the personalities of the main maybe-couple, is an utter lack of tension. There is no adversity or danger present at all, even when Yuki flails and causes a typical sort of romance manga misunderstanding. No threat to the existing relationship even seems possible for the bulk of the first volume, and while it is nice to have a romance story without the world ending every twenty pages it feels very flat and unsatisfying to read. As I have been mentioning, a lot of these issues start to get cleared up in the second volume with the introduction of an adversary (who I won’t spoil) that is already shaking up the far too cozy status quo to great effect.

Yuki-chan is something which, on paper, I should absolutely love. It has great comedy, nice presentation and a core idea that I am invested in, even though it smells slightly of fan wish fulfillment. Unfortunately, the result doesn’t quite pull it off. While the first volume is pleasant enough to read, its somewhat facile primary cast made it feel weak. The second volume has already taken great strides to correct this, and hopefully this momentum will carry on into the third instalment whenever it is released. As a stand-alone romance story it is pleasant to read, and as a fan of the franchise it is a great addition to the existing material with its own unique charms and ideas.

7
While it suffers from a lack of intent in places, this is a well done romance story whether you are already in love with the cast or not.