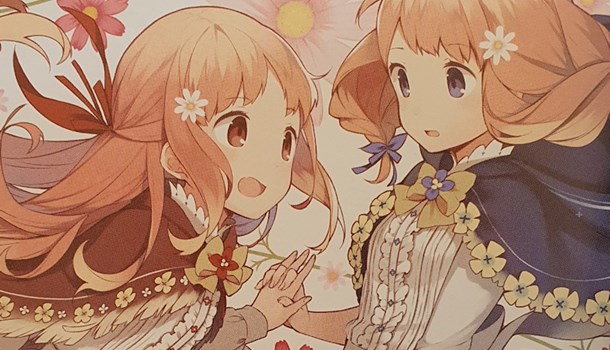 Hailing from the pen of Hanokage, who drew the Puella Magi Madoka manga, Cosmo Familia is another magical girl story but with a cute invasion angle behind it.

The Cosmofs are dangerous critters from another world that are inherently destructive, though they don't attack humans. Amakawa Alice defends the remaining locals from their cute, property damaging ways, though she's ostrocised for being the daughter of the woman everyone blames for the invasion, Amakawa Raika. Alice's mother disappeared shortly after the invasion, and as such Alice lives a lonely existance awaiting her mother's return.

Aiding her in pest control is the Cosmof called Papii, who morphs into a rather splendid scythe.

The book starts at a turning point in events, as Alice is soon beset by a pair of Galactic Police operatives who require her help to eliminate the Cosmof's completely. This is further complicated by even more sudden arrivals, and it's not long until chaos pretty much reigns and events overtake Alice completely. She ends up falling through a hole that takes her 20 years into the past, where she meets her mother and servant Imori. Finally, the truth about the Cosmofs may finally come to light, but Alice didn't come alone and not everyone is so concerned about the Amakawa reunion.

The setup to the story introduces plenty of characters and factions ripe for conflict, but it all feels a little... Famila. (Sorry). There's a very clear imprint from Madoka here - cute girls with dark magical powers, mysterious aliens with their own agenda and a doe-eyed protagonist will all be deja-vu to fans of the iconic magical series. The story structure does at least give us a very purposeful narrative, with the logic of a very illogical situation making sense in-situ. As such, getting sucked into the world of Cosmo Famila is really quite an easy ride.

The artwork is splendid, and only a few of the more breathless panels give any rise to confusion. It's a sharp looking book, and fans of the genre will no doubt enjoy the character designs, weaponry and antagonists. If you enjoy Card Captor Sakura, Madoka, Sailor Moon, RWBY or similar, you'll doubtless find this to your tastes. I was pleasantly surprised to see some genuine menace at the end of the book, but even so I can't help feeling that this trope is becoming as over-used as Isekai.

I myself do not read that many magical girl series, but they aren't aimed at me. What I can see here is a perfectly servicable story with a strong structure, attractive designs and potential for some exciting adventures It doesn't strke me as the genre-defying powerhouse that made Madoka so beloved, nor as iconic as the Sailor Senshi, but as a Japanese staple of storytelling, it'll be enjoyed by fans of the genre.

7
A new entry into the magical girl ouvre with attractive art and a solid introduction. Time will tell if it rises to the level of it's magical peers.