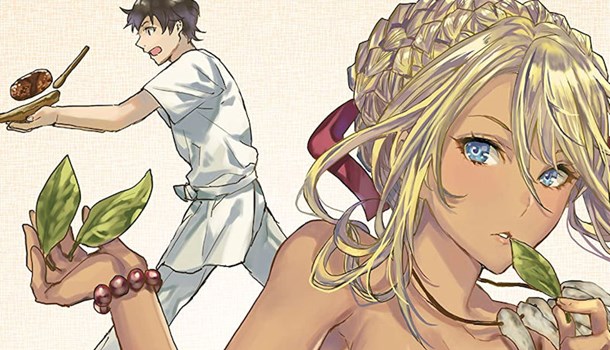 Another day, another isekai! Asuta is an aspiring chef who has been helping out his father in the family restaurant. Unfortunately some corporation wants them evicted to make rise for a construction project, and while Asuta's father lies in hospital after a deliberate motor incident, Asuta learns that the restaurant is on fire and runs into the flames to save his father's precious cooking knife.

Cue Asuta waking in a strange world, said knife safe in hand but his previous reality now lost to him. Instead he finds himself in a strange land surrounded by Giba (a sort of rhino/cow hybrid) and a young huntress who catches them for their meat called Ai Fa. Upon learning that the locals have no concept of cooking delicious food, the hapless young chef must put all his talents to work and learn to cook with wild game.

Odd then that the book actually grabbed me, enough that not only did I enjoy the first volume, but I bought the second at full price too. For digital-only releases I generally wait for the inevitable sale, but despite the strain of having one eyebrow raised in constant incredulity at the cheesiness of this plot, I really, really enjoyed these volumes.

Originally a light novel by EDA and illustrated by Kochimo, the artist has taken on manga duties for this release and he really brings a lot of life to these characters. The art is occasionally sketchy (literally, not figuratively) but his panel-work and layouts are rock-solid, with some wonderful character poses, smart positioning and vibrant angles lending a lot of life to the conversations. Asuta does tend to morph from world-weary teenager to energetic cutie-pie a bit too often between panels, but otherwise the expressive nature of the art does wonders to bring the tale to life.

The logistics of the story are well planned out too, with politics between local tribes clear and concise. At no point did I feel lost at how one set of characters related to another, and storylines such as Asuta offering to cook for the Ruu clan, in order for the eldest woman of the tribe to eat her meals without undue pain due to the toughness of the meat, lend our hero a quiet nobility that shines through in a land where might is often the only currency.

Central to it all is the relationship between huntress Ai Fa and Asuta, which is very sweet. Yes, we have the obligatory "male character sees female character nude" trope and yes, she's wary of the stranger but warms to him as he proves his value. It's certainly nothing new in any sense, but it's all carried off with such charm that it works without feeling trite.

So while it could have been influenced by Dr Stone, Food Wars or any number of similar isekai series, in a sweet bit of serendipity, it's not the ingredients that make this book so enjoyable, but the way they're mixed together.