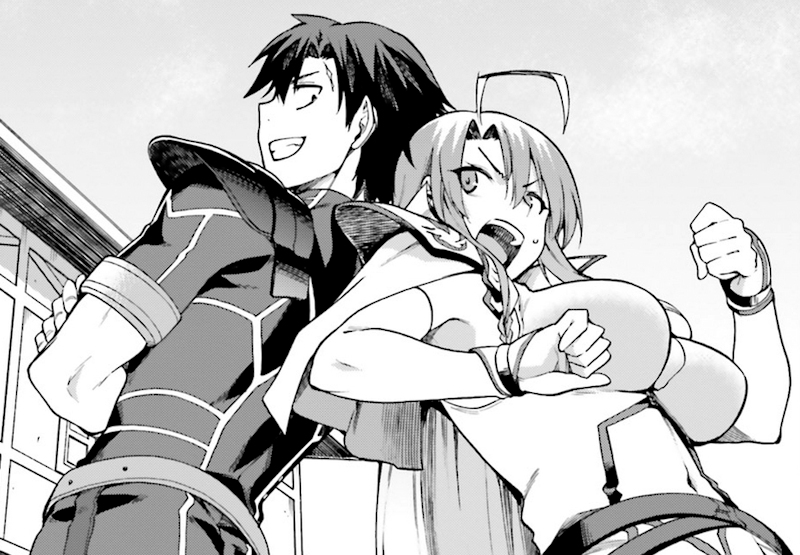 Combatants Will Be Dispatched

The Kisaragi corporation is on the verge of taking over the Earth, the only issue for the employees being that they'll be redundant overnight once that happens. Happily the top minds at the company have discovered a way to teleport their agents to new worlds, and so with a little experimentation (and some sacrifical lambs) the business can expand into new territory. For agent Six, this is an opportunity to discover cute new life-forms. And date them.

A comedy manga that follows the bad guys, Combatants Will be Dispatched was a surprisingly spritely tale. Six is the usual dim cannon fodder with low aspirations, but is also likeable in an anti-hero sort of way. His able android agent, in the diminutive form of Alice, provides enough backtalk to make the pair an engaging duo. While adventures on new worlds are not necessarily anything new, the setup of having our (anti) heroes deliberately invade other realms creates lots of promise for variety in future volumes.

Volume one finds our team in a fantasy land populated by beautiful Knights riding unicorns, so nothing really outside the realm of the usual Isekei genre. One of the mechanics I did enjoy was that the level of support Six can draw upon is paid for by, essentially, evil credits. The more of a bastard he is, the more credits he amasses, which builds up his support. Even lusty thoughts count towards his evil riches, so he's encouraged to screw over and use everyone in his path. Delightful.

In this new world, it suits his purposes to help a buxom beauty (Captain Snow of the Royal Guard) fight off a demonic horde (or as he calls them, the competition), after which he'll try and take the world for his company. He's paired up with a gang of oddball mercenaries, my favourite of which was Grimm, a wheelchair bound cutie who happens to be the disciple of Zenarith, God of undeath and disaster, two factors which play a large role later on. She's just so bad at being a baddy it's adorable. Alongside the erstwhile Captain Snow, they also have a Chimera in the party who just wants to eat everything. They're an odd crew to say the least.

The humour in the book is pretty base - Six is a complete horn dog, and when, for example, a busty demoness offers him a place at her side and his pick of the human women once enslaved, he agrees unconditionally and without hesitation, leaving his teammates to to scupper the deal. He's such a fantastic, immoral son of a bitch I can't help but like him.

There are a couple of short bonus manga segments fleshing out the cast a little, and more backstory is always appreciated. The art style is sharp and attractive, with some superb layout work. When pages flow like this, they're a real pleasure to read. There's lots of full body shots overlaying panels, tone for depth and dynamic, expressive action laden throughout the volume. Pacing is equally on-point, and at no time was I impatiently awaiting the next action sequence.

In all, I really enjoyed Combatants. True, it's not particularly stand-out for the genre, but the little touches really combine to give the book its own voice in a crowded market. Fun, sexy and evil in all the right ways, this is a loveable band of baddies that will grow on you - join the Kisaragi corporation and embrace the totalitarian evil that will make the world a better place!

8
Isekai for evil-doers, it's fun to be the baddies!
COMMENT AND DISCUSS
blog comments powered by Disqus