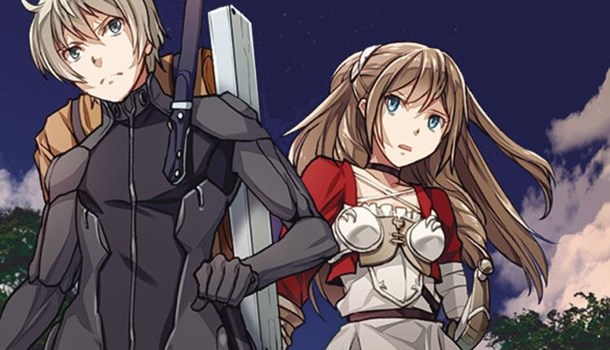 In a future where humanity is fighting against alien "bugs", flesh eating creatures menacing the many planets inhabited by humans, Lt. Corinth is on his way to meet the rest of his fleet. A sudden attack causes the ship to go down mid-warp, losing all hands. Promoted by the ship's AI to Captain, Corinth has to abandon ship to land a on an unknown world where swords and magic are the pillars of society.

The original light novel was immensely popular on release, and now the manga adaptation brings the world to visual life under the steady hand of Tomomasa Takuma, the artist behind the wonderful Lodoss War manga.

I'll admit the opening chapter was a bit of a slog, with a lot of stilted exposition coming from Corinth's AI companion. Stiff delivery is normal for a computer, and once Corinth makes his landing, the book slides effortlessly into a futuristic isekai format. The bold captain is aided by his futuristic weaponry and Nanom (nano machines) that grant him a number of exceptional abilities such as running long distances, improved aim and the ability to share his healing abilities with others.

The last one is pivotal, as he meets a group of warriors protecting a young lady (who we later learn is called Cleria Starvine) from attack by savage beasts, though sadly each falls prey to their enemies, including the young lady herself, who loses her left arm from the elbow down, and her right foot. The nanom are able to transplant themselves into her body, saving her life, and from here the pair must help each other to survive, a task made more complicated by the fact neither can understand the language of the other.

This is where the book deftly switches between perspectives, showing the thoughts of hero and heroine and their struggle to communicate. Having traveled extensively for business, it's a situation I've often found myself in, using universal gestures to make myself understood.

Takuma's art is, as expected, lovely. The technical details on the ship, armour and various technologies employed are sharp, detailed and well thought out. The panelling is easy to follow, and expressions are emotive and convey each situation well, ever more essential when the two leads can't actually communicate.

It's really quite delightful watching the pair learn about each other, the subtle gestures, acts of kindness and unusual traits that baffle each of them are really the heart of this first volume, and I have to say it was a wonderful read.

There is a sense, as with most isekai, that our protagonist is somewhat overpowered - he can learn languages, techniques and even magic via his nanom, which really means that only his acts of kindness are truly "him", and that this reliance on technology means that anyone in the same situation could look as awe-inspiring to Cleria as Alan does. I'm rather hoping the book cuts back in this over-reliance on tech to show us more of the man we're following in this strange new world.

All in, I was pretty won over by the book, mostly for it's "stranger in a strange land" setting, the lovely character designs/artwork and the genuine chemistry the two leads seem to be developing. I'd certainly recommend checking this out, the sheer scope of proceedings promise plenty more to get our teeth into down the line.

9
An interstellar isekai with huge depth, one to keep an eye on!