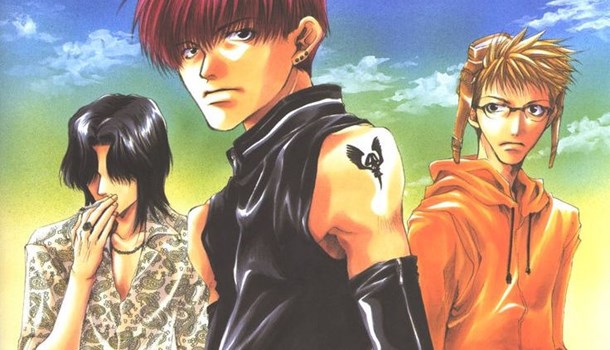 This Graphic Novel by Saiyuki creator Kazuya Minekura contains all the hallmarks of his stories - angsty, too cool to smile protagonists, violence, smack talk and more violence. So Saiyuki fans should just go and buy it.

The story concerns three young men drawn together by a need for money and a talent for "the game", whereby one team defends a territory whilst another invade, with the prize being sensitive data harvested from the top companies in Japan. The stakes begin to increase rapidly as teams begin to play for keeps, and all the while the business world seems to be reacting to their victories - this is clearly more than just a distraction for rich city fat cats.

Something of a pet project for Minekura, Bus Gamer was drawn for Enix, but through a series of problems and cancellations, it never had a chance at a smooth run. With that in mind, Minekura presents us with the "pilot edition", a one-shot collection to get you in the mood.

Now, I haven't read the Saiyuki manga, but I didn't like the anime. I thought it was badly animated, dull and populated by gits. Frankly I couldn't have cared less if the good guys had been dropped down a well. So I didn't expect much when this landed.

And in some respects I was right. It's still quite macho, though finely drawn and not over the top, the three main characters all fairly nonchalant, and rather than coming across as cool, it simply deadens the suspense. After all, if they don't care, why should we?

It's only when the book gets going and the boys realise that they're in trouble that things pick up significantly. Personalities and motivations come to the fore, and the book picks up pace - sadly it then stops dead as we run out of pages, which is a real shame.

Whilst this won't blow you away, there's enough here to make subsequent volumes welcome, and time will tell if the artist ever returns to finish what he started.

7
Solid and entertaining thriller, it stops right where it should start, which is a real shame.