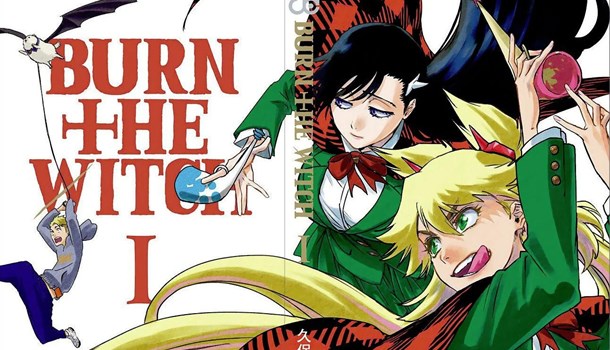 Tite Kubo's back, with his Bleach-adjacent series, Burn the Witch. There's been a lot of fanfare about this title, not only because of the popularity of the universe Kubo has created, but for the 3 part OAV which debited on Crunchyroll last year. It's unusual to see the anime before the manga, but we've had to wait quite some time for this book, and Viz have a hit on their hands if Amazon's "Out of Stock" notice is anything to go by,

While I wasn't blown away by the anime, I'm a lot more impressed by the book. Arriving in a tartan slipcase, volume 1 is a particularly plump affair, running at just over 250 pages.

Setting up the premise, the story follows two witches - the loud and obnoxious Ninni Spangcole and her friend, the quiet and reserved Noel Niihashi. Together they work for Wing Bind, an organisation that manages dragon interactions in "Reverse London", a mirror dimension to regular London. Dragons have long been a cause for concern, and only those who are licensed may interact with dragons, with violators facing 100 years of imprisonment or execution. Unfortunately for Noel's normal friend Balgo, he may have experienced more dragon interaction than he's aware of...

Let's get onto Balgo, the young man obsessed with Noel's knickers. It's a trope so old it's in a care home with a DNR attached, and it's just not endearing. He's basically a kind, over-sexed moron, and it's really hard not to root for his imminent demise. Happily he's toned down somewhat by the end of this volume, but his initial introduction is jarring and distracting. If the book didn't need him as a plot device, I'd happily see him removed entirely. Ninni is equally annoying to start with (SHE SHOUTS EVERYTHING!) but thankfully her skills and drive make it far easier to overcome the shortcomings of her personality, which at any rate are explained away fairly quickly in a way that actually brings a surprising amount of depth to her. Balgo is still a prat even at page 250.

The character designs are very attractive - the Wing Bind uniform is just begging for cosplayer attention. Essentially a green school uniform with a red and black tartan cape, it's wonderfully reminiscent of older magical girl anime series like CLAMP's Rayearth, while adding its own spin.

The artwork, as you might expect, is wonderful. Full of dynamic panels, facial expressions bursting with personality and some inspired monster designs, the whole package is a joy to feast your lucky orbs on. The fact that the series is set in Britain also gives it an unusual look for a manga, with many of the styles taken from classic British culture, be it Bruno Bangnyfe's decidedly punk look, or Harry Shayk's Mod aesthetic. The streets of reverse London and the use of the BBC or even terms like "best mate" give it a very distinct identity, and one we can appreciate at the UK Anime Network.

That's not to say the translation is perfect - too many times the book slips into Americanisms ("That recap was so cringe" being one jarring example) making it feel like an impression of being British rather than the genuine article. If Viz is serious about making the book feel authentic, it should consider a translator with a better grasp of English culture.

The rest of the book works tremendously though, thanks to the well-thought-out worldbuilding at which Kubo is a master. The Wing Bind organisation is beset with delicious politics and interesting characters that help to make the world feel believable. The rules of engagement and dragon classification lend weight to how everything ties together, and ultimately Reverse London is a place that feels like fun to visit.

In all, the book feels ripe for expansion. I want to spend more time with the characters (maybe not Balgo) and the world they're in, especially knowing it ties into the larger Bleach universe. There may be a few mis-steps along the way, but overall this is a great piece of Shonen adventure.

8
A few niggles aside, this is an imaginative new world, full of possibilities.