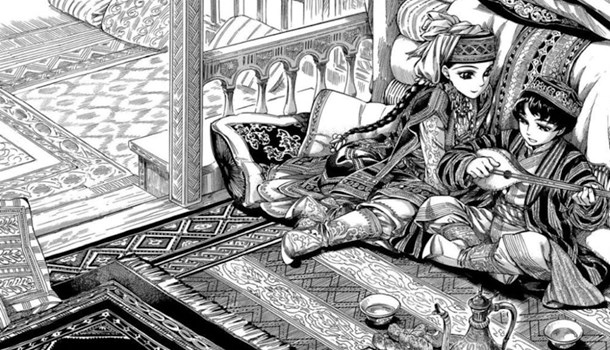 Two years after finishing Victorian romance Emma, Karou Mori has made a spectacular return with her newest series, Otoyomegatari (or A Bride's Story to use Yen Press' English title).

This new series, which to date is up to its third volume volume in Japan with the first two volumes currently available in the west, takes us away from the author's earlier setting of Victorian England and instead takes us to the wild, wind-swept mountains and grasslands of 19th century Central Asia; in particular, a small settlement near the Caspian Sea.

It is into this environment that we are introduced to Amir Halgal, the daughter of a tribe of nomadic herders, as she is presented to her new husband Karluk Eihon, the son of a family of formerly nomadic people who have since settled down. The unusual thing about this arrangement is that Amir is twenty years old while Karluk is only twelve, at a time where life expectancy was barely into the thirties if you were lucky, this kind of arrangement was all too common.

However, this series to its credit never takes the eminently easy route of playing this arrangement for fan service or raunchiness and instead takes a much more mature approach to it, with the characters showing maturity beyond their years – an all too necessary need at a time when children as young as fifteen were expected to take over the family business. Yet storm clouds are on the horizon as Amir's family suddenly appear, seeking to retrieve their “property”...

The artwork, as always, is exquisite and well detailed and yet Kaoru, in the intervening years between this and Emma, seems to have taken her artistic talent up a notch, with the costumes and environments taking on an almost realistic nature. Additionally this work shows the amount of research that has gone into this manga - from the breathtaking environment of Central Asia to buildings, farming practises and even innocuous items such as pipes, cutlery, the design of wood panels – even underwear (don’t ask).

The supporting cast members, much like Emma before it, are not simply there to offer plot exposition or scene decoration – each of them are given the opportunity to shine, each with their own quirks and traits from Karluk's elder sister Selek (and her troublesome child Rostem) through to Balkirsh (grandmother and matriarch of the Eihon family) whose desire to protect her family is matched by her ability with a bow. Even the “villains” of this volume, Hazel, and his cousins Baimat and Joruk come off as altogether human characters rather than merely two-dimensional villains. In fact, my only grumble about this volume is that there are occasions where, by giving time to the other characters of this series, Amir (who we're initially lead to believe to be the lead) seems to fade into the background.

Finally, we come to Yen Press' presentation of this series – boy did they pull out the stops with this release, featuring a hardback cover and dust jacket as well as their typically excellent translation of the original Japanese script. This makes the £12.00 at which the book officially retails all the more worth the price.

All in all though, A Bride's Story comes off as an entertaining read, and I definitely look forward to seeing how the series develops.

9
Kaoru Mori has created a good start to this series – but time will tell whether it will continue at the same pace.