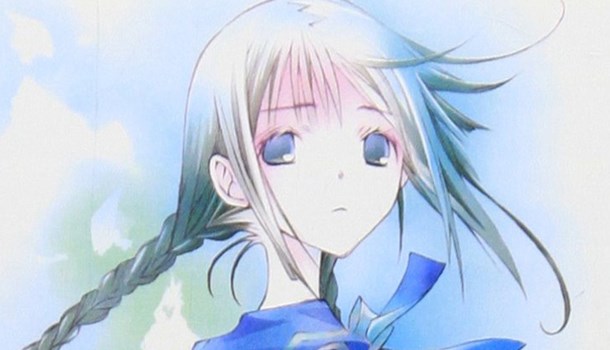 After a rather inauspicious start via its first English translated outing of Mizuki Nomura's books, Yen Press' Book Girl (or Bungaku Shoujo if you insist on the Japanese name) series continues via its second novel, Book Girl and the Famished Spirit, again reuniting former literary genius in hiding Konoha Inoue and his book-munching senior Tohko Amano as they find themselves drawn away from their languid days as the sole members of the school literature club into the midst of a dark and occasionally dangerous adventure.

As per the first novel, the cause of the duo's adventure this time around starts on account of Tohko's search for fresh "food" in the form of a mailbox left on the school grounds to try and lure in lovelorn students and make them write a report on their budding romance in return for help impressing the object of their desire.  On this occasion however, rather than some tasty morsels to chew on Tohko finds herself the recipient of some incoherent, rambling and creepy notes with references to death and suffering combined with seemingly random numerical patterns.

With stories of ghosts spreading around the school, Tohko sets out to find the culprit who is posting these notes, staking out the mailbox to get to the bottom of what she sees as a nonsensical suggestion that anything otherworldly is to blame - a decision that presents a shock for Tohko and reluctant assistant Konoha as they come face to face with the individual responsible, a girl who appears to be decidedly ethereal as per the rumours.  As the book progresses, so we learn more about the person (or perhaps persons) behind these notes - a tangled and twisted story that eventually draws a boy who shares his house with Tohko named Ryuto and aloof "friend" of Tohko's Maki Himekura into the midst of a depressing tale of love, loss, jealousy and revenge.

Given the titular character of this novel series' infatuation with the written word, it's no surprise to see references to classic literature crop up throughout the book as it did with Book Girl's first outing - indeed, on this occasion a significant chunk of the main story as it's revealed pays homage to Wuthering Heights before taking off in its own direction later in the book.  While such references can be quite enjoyable and interesting in their own right, at times they can be clumsily introduced into the story via passages that read more like copy and pasted book reviews rather than a genuine attempt to weave references fully into the body of the story itself, breaking any feeling of immersion into the story in the process.

Away from that (occasionally quite major) irritation, Book Girl and the Famished Spirit feels like a far more polished effort than its predecessor - its writing is tighter, its characters and their motivations are more adequately explored, and the twists and turns as the story progresses manage to tread the line between surprising the reader yet still feeling plausible quite admirably.  Much like the first book there is a disconnect between the bright and breezy (with occasional hints towards fan service) everyday life of the characters and the pitch black despair and darkness of the wider story's subject matter, but it's somehow less jarring here to the point where you could almost argue it accentuates the despair of those involved directly in proceedings rather than reducing its effectiveness.

Book Girl and the Famished Spirit may not be as clever as I suspect it thinks it is (referencing and leaning heavily upon Emily Bronte doesn't automatically make a work an intellectual tour de force), but it is a far more satisfying and entertaining read than its predecessor that succeeds in almost every area where the first book failed.  It still suffers from trying too hard in places when it tries to alter its tone or tie things in to well-known books, but despite this it does a good job of relating its tale and perhaps more importantly it fleshes out its major characters to the point where you care about them and their plight - a vital component to any good story that automatically makes Famished Spirit a more worthy proposition than its predecessor.

7
Despite its clumsy moments, this is a far tastier slice of entertainment than its bland predecessor.