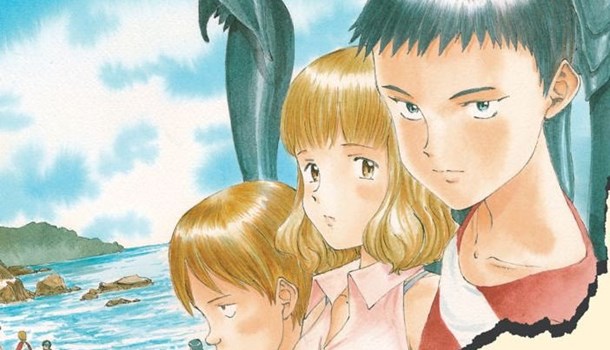 Lets face it, if you were ever asked if you wanted to save the world or pilot a giant robot, you would jump at the chance. No questions asked. Doubly so if you were asked when you were still a child. Surely there could be no downside, right? Right?

Well, maybe there is a downside to piloting a giant robot to save the world. It's a massive responsibility and events may turn to tragedy no matter what you do, especially when the person writing the story is Mohiro Kitoh. Readers may remember this author as the person behind Shadow Star Narutaru, a series which looked light-hearted initially but which quickly turned grim. Bokurano wastes no time trying to deceive the reader, as even on page one it has a depressing narration in past tense to set the stage. The principle cast are a set of fifteen kids, primarily seventh graders, who all meet at a coastal summer camp. In short order, they wind up finding a mysterious cave, a mysterious old man, and are then asked to play a game - all they have to do is touch a piece of wood. Not too long after that the kids find themselves inside an impressively ugly giant robot, fighting for the safety of Earth, ignorant to the reasons behind or consequences of their "game".

From that very first panel the series has a definite whiff of tragedy surrounding it and makes no attempt to hide the fact that things are going to end poorly for the cast. At every stage of the introduction and setup there is always at least one character saying “I dont think this is a good idea, guys!”, who are of course ignored. This has the unfortunate side effect of making all of the events in this series, at least thus far, utterly predictable. The series swiftly knocks you into the habit of assuming the worst is going to happen to the characters as this is always what ends up transpiring. A character, especially the amusing mascot, is evasive in conversation? They are clearly untrustworthy and they are in the process of or have just duped the cast. A character narrates their backstory/motivations/emotions or mentions someone they care for? They'll be dead soon, or at least their spirit will be crushed. This is especially true in this first volume, as when the only character I had been given time to become attached to died I was left floundering looking for a reason to remain invested in the events portrayed on screen. Rather than build a convincing tragic story around the reader it instead feels that the author is being brutally spiteful to try and upset you, somewhat like a pen and paper RPG Dungeon Master who delights in killing off player characters for a laugh. It feels heavy-handed and shallow, and left me feeling disaffected rather than eager to see how it develops in future volumes. Why bother getting invested when you can clearly foresee what is going to happen?

While the plot failed to get any kind of hooks into me, the world portrayed in Bokurano certainly did.  The author effortlessly paints a technologically advanced near-future world by very carefully revealing facts that are common knowledge to the cast at a very measured and smart pace. The greatest success of the world building in Bokurano is that you never feel you are being forced to take heed of it - you notice small details like futuristic-but-still-recognisable cars of your own accord, adding to the feeling of discovery. The stark visuals do a great service to the design - the art style is primarily made up of very thin scratched lines, giving everything a very sharp and defined edge. Outlines are built up using multiple controlled strokes, giving objects and characters a very deliberate and solid presence. This strong definition is very effective, especially in the scenes containing giant robot fights.

The robots themselves within Bokurano deserve their own paragraph as they are outstanding - not just in the intricate design work, or the painstaking detail in the art, but the emotions the robots evoke. They are nothing like Gundams, which can be seen as the pinnacle of human technology and engineering, a glorious thing;  instead both the robot piloted by the main characters, “Zearth” and the antagonist machines are downright unsettling and terrifying to comprehend. The constructs are so large, heavy and overwhelmingly armed that they cannot avoid causing colossal amounts of collateral damage with every single action. They are truly horrifying things, and its a shame that the rest of the plotline does not have the same gravity that these things do.

While it has some glorious aspects, the poor plotting and utter lack of tension made Bokurano tiresome to read. The lack of subtlety in in the story is not helped by the bloated and ill-defined cast, which left me unable to invest myself in what was unfolding.

5
Some very nice ideas (and a truly terrifying robot), let down with frustratingly sloppy execution.