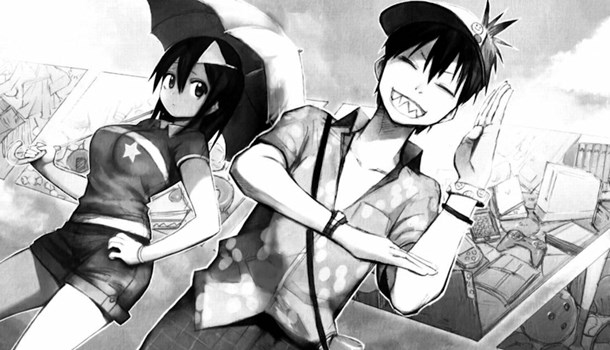 The Twilight movie franchise has now wrapped and the last flake of glitter has been swept off the sound-stage by the janitors. However, as much as one might expect vampires to be shrinking before a coming dawn, the pale are actually looking quite hale. The two big vampire shows on US television, True Blood and Vampire Diaries, have both been renewed this year; and in the anime world, Hellsing Ultimate has brought vampires back with a bang, while through the currently-streaming Valrave the Liberator even the entirely unrelated mecha genre has found room for a little fang-service! Manga has also been an earnest thrall to the masters of the night - Vampire Knight Guilty is still a big feature on bookshop carousels while publisher Seven Seas Entertainment is something of a purveyor of vampire manga, what with Vampire Cheerleaders, Dracula Everlasting, My Boyfriend is a Vampire, Dance in the Vampire Bund and Blood Alone all in its stable.

It's clear to see, then, that there's plenty of unlife in the old dog yet. We've had romantic vampires, and we've had monstrous vampires - will a comedy vampire inject a fresh transfusion?

Blood Lad is written by Yuuki Kodama - no relation to the Kids on the Slope creator of the same name - and is an ongoing series that has been serialised in the Young Ace manga magazine since 2009. In that time it's amassed a fair following - an anime version of Blood Lad is imminent and will commence broadcasting in the coming summer 2013 season. In anticipation of the animation, you can prime yourself on the series with Yen Press' release of the Blood Lad manga - two volumes are currently available in stores with a third appearing shortly. Will reading the manga build up your excitement and anticipation, or will it be a turn-off?

Teenaged vampire Staz is a descendant of the legendary Count Dracula, but the apple has bounced off a root and rolled quite a way from the tree. Rather than dominating Man and teaching him fear through darkness and plague, Staz is a slacker who wants to play video games all day. Far from expressing the high culture of demonic nobility, Staz disdains his pedigree and ruts in the plebeian trough; instead of lording it over men he gobbles up their entertainment. Staz just can't enough of Japan - anime, manga, gunpla sets and JPRGs alike, it's his one overriding obsession. Oddly enough, though, it's no obstacle to his being one of the most formidable bosses in the gang-divided concrete hell of the demon world - he still smashes apart any other demon gang trying to take his turf to brutal effect, and he's amassed a loyal following who get him figurines and wall-scrolls as tribute.

Staz's lieutenants then give him a call, but before he can bawl them out for interrupting his game, there's been an interesting development - for once, the intruder isn't some trouble-stirring punk but... a human. A human girl. Bouncing with glee at finally having the opportunity to have a real person with whom he can talk about moé, Staz immediately orders the girl, Fuyumi, be sent up to his lair. We mustn't forget that Staz is a vampire though, and things go awry when the sight of Fuyumi inspires (blood)lust at first sight... but through the medium of Final Fantasy he moderates his urgings and promises not to bite a chunk out of her neck. Nonetheless, this is the demon world, and a visit here isn't exactly a casual parkland saunter for someone of flesh and blood - something that the hapless Fuyumi soon has very little of when another demon gobbles her up! Fuyumi's ghost thus becomes a more suitable inhabitant of the demon world, but Staz promises to bring his new friend back to life. It's no easy task though, for there is little knowledge about humans, naturally an anomaly in the demon world... which leads to the first problem. How exactly did Fuyumi end up in the demon world in the first place? Looking for the portal that Fuyumi stumbled through starts to open up some very strange characters and circumstances...

Characters do actually turn out to be one of Blood Lad's strong points, with a variety of entertaining figures populating the cast. Staz is pretty well-balanced as a protagonist - his love of Japan doesn't override everything he does; indeed, outside the opening chapters it remains largely in the background, poking up in intermittent callbacks where he's amazed by smartphones and other gadgets. This gives him consistency without making him one-note. His slacker mentality also doesn't mean that he's listless and passive, either - sometimes the relative path of least resistance is through an enemy's face! That also lets a nasty streak suddenly surface from time to time, a reminder of his monstrous nature which also gives the story arc a bit of edge too. He's a genuinely interesting lead.

The appearance of the treasure-huntress Bell also injects the story with plenty of vim and vigour, as she's a vivacious free spirit whose personality is effectively built up from her lack of concern for locks and walls. This is because she thinks with portals, having a lot of fun dropping everyone around her through magical holes to put them where she wants them. She takes her profession to heart, getting giddy and excited about opening any closed door or locked box she comes across (effectively tying her to Staz and enrolling her in the story as she comes to desire his own secrets), and she's also a bit of a smart-alec who's cheerfully disdainful of however many people she puts out along the way. Our ghostly girl Fuyumi is not nearly so active, though - despite being the source of the story she's meek and fretful and averse to conflict, and while Fuyumi is more than a walking MacGuffin and does have some activity, the story's more about things happening to her rather than getting herself involved in anything.

The things which do happen to her are interesting though. The battles and fights that occur are a lot of fun and don't revolve around power-levels - a single boxing match occupies over two chapters but never feels like it's dragging. The dialogue is gently humorous and full of banter, and while there are a couple of lame fourth-wall gags they're only brief asides that don't occupy too much attention, so you bounce back and forth between the characters and along the path at a good clip.

While the characters and events are quite spirited, the artwork however is determinedly average. The environments are extremely bland, and the demon world is literally no more than an endless plane of generic urban tenements, Newcastle car parks and slummy downtown sidestreets, which makes it dull and not very engaging in a visual medium. Now, you might say that such a depiction of Hell is a meaningful social comment, but that also fails because the bland art means that it's half-hearted - there's no dank alleyways spilling fetid refuse from the inadequate shadows of rotting concrete piles, it's just long, swept, empty streets. Indoor architecture is empty geometric boxes and environments are extremely plain - one character is agape in slack-jawed amazement at a 'sweet pad'... that looks like a room in a Travelodge.

Character art fares better. There is some considerable focus on the character's couture with multiple references to Oniqlo, the demonic ("oni") version of Japanese clothing company Uniqlo, and chapter opening splash pages and even a few manga scenes where the characters make a laboured point of changing into fresh duds. Their gear does have an chunky industrial streetwise cool, suiting the urban environment of the demon world, but  it's not exactly Tite Kubo. While not especially imaginative then, the art shouldn't be undersold - it's competent and solid with able form. There is also some very good movement with strong impact in the action sequences, so while it may not be adventurous it's by no means unattractive.

A double-sized volume, Blood Lad's cover price doesn't save much over the cost of two separate editions, but it does have advantages in other respects. One of the problems with shonen manga is that you can fire through them pretty rapidly - however, Blood Lad has plenty of meat on its bones. Even in its individual halves it's a dense read with lots of content, and so takes a satisfying length of time to work through - you're not left feeling hollow from a quick disposable read, it's a chunky tome that you can chew over for a good while and so offers good value for money. There are also ten colour pages in two separate sections, incorporating attractive splash pages, giving the volume a spit of extra polish, too. The hazard-line design of the cover is simple but equally bold and striking.

Blood Lad is an entertaining holiday read - it's a light-hearted romp with plenty of energy and while its art is plain that also means that it's clean and you can slide along the panels smoothly and easily. The story is straightforward but lively characters dance on it, and a thick volume keeps up the pace for a long time without dragging or lagging. As the summer vacation comes around and we look to escape from yet another Blighty washout, it's a manga that'll fit well in your case, and you'll look even better when comparing Staz's pasty undead pallor to your own browning tan, too!