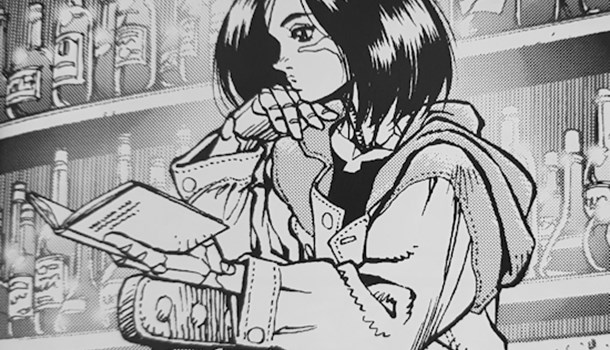 First published as short stories between 1997 and 2006, this collection was first put together in Japan and released with a beautiful little Alita figure. This now retails for upwards of £300 on the secondhand market, so thank goodness Kodansha has adapted the book into English and given it the deluxe hardback treatment! Sure, I'd love the little figure, but this is easily the next best thing!

The book contains four short stories set in different times and with very different themes. Let's take them one at a time.

The first is the titular Holy Night, featuring a young Doc Ido just finding his feet in the Scrapyard and trying to make his way as a Doctor. Unfortunately there's not much need for a doctor specialising in human biology when the Scrapyard is full of cybers, so he has to turn to bounty hunting to make ends meet. During one such outing, he meets a young girl being pursued by a huge mech, and being the dashing hero he is, Ido of course saves the girl and takes her to safety.

The girl seems as helpless and educated as a newborn, and so Ido names her "Carol" in keeping with the Christmas season, and so begins a heart-wrenching story as only Kishiro can spin it. This really fits like a glove into the Alita canon and as much as it's a hard read in places, it's befitting of Alita's world and a must-read.

Sonic Finger is a more straightforward action story set during Alita's time after motorball when she pursued her career as a Hunter. It gives the Hunters from the earlier books a bit of time to shine and showcases some terrific new outfits for Alita, but mostly works as a bit of nostalgia for the days before Barjack and things getting complicated. It could slide right into the main books, but it's pretty inconsequential and almost works as a "deleted scene", excised to keep the main book focussed. It's still beautifully drawn and captures the feel of the time perfectly.

Hometown is a simple one-chapter story of a Deckman (the civil-service style admin bots) who goes on a mission to fetch water for a fallen soldier at the demolished sites of one of Alita's raids during her time as a "Tuned" agent of Tiphares (or Zalem in this translation). Mostly told through silent panels, it's a little like Wall-E if it Disney had the balls for this kind of ending. It's an odd little outing that my friend Soph would doubtless love for it's tragedy and pathos.

Finally we have Barjack Rhapsody, where we catch up with Koyomi, which picks up after the original series finale (before it was retconned by the much later Last Order series). The story follows the seeming return of Barjack's huge overlord, Den. Koyomi's investigation takes her to an unsuspected truth, and delves into the power of myths and their ability to shape the future.

As a bonus to these stories, the artist himself talks about his work on the series, his health issues that forced an early conclusion to what he calls "old Alita" and the events that led to an Alita Playstation game. It's a great little piece that sets the tone for the stories within. There's also a helpful timeline of events within the Alita universe.

Overall, this is an amazing book - it tackles disparate topics in a unified setting and really captures the mood and style I've come to love from Alita's adventures. The format of the book makes it feel as premium as the contents it holds, and honestly I can't think of a single reason for not picking this up (unless of course you're new to Alita, in which case I'm very jealous of the journey ahead of you!)

Essential for any Alita fan, and an absolute holy grail for me is now within my collection at last.

10
Utterly absorbing and a testament to the power of Yukito Kishiro's world-building.