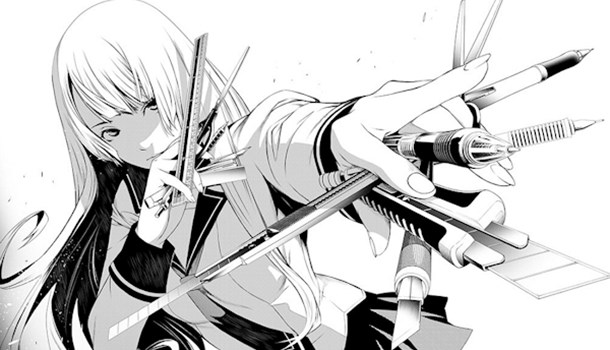 Bakemonogatari is a hugely successful light novel series that truly exploded in Japan in 2009, when it was adapted by Studio Shaft into an animated series. It was so successful that a touring museum celebrating Shaft studio's Madoka and Monogatari series, lovingly titled Madogatari, had to be extended due to popular demand. (Which was lucky for us as we caught the extended tour which you can read about here!)

This collaboration between author NisiOisin and artist Oh! Great (Air Gear) is a sharp-looking new way to enjoy the supernatural Monogatari series.

For those unfamiliar, Bakemonogatari is the tale of one Koyomi Araragi, who catches a falling classmate and is shocked to discover the girl is completely weightless. Hitagi Senjogahara is the victim of a mystical crab that stole her weight (9/10 to be exact!), but she isn't the only one with a secret related to monsters, and soon Araragi introduces her to a mysterious man who may be able to help take away her pain.

Oh! Great is an unusual choice for Bakemonogatari - not that he's a slouch when it comes to sharp lines and incredible detail, but his kinetic style seems almost diametrically opposed to a moody, dialogue heavy story like Bakemonogatari. That said, his heavily-inked and detailed artwork does look glorious across the pages, even if the serious nature of the tale seems occasionally undermined by the fan-service shots littered throughout (a signature of his Air Gear series). However, when called for his art conveys incredible emotional depth (Senjogahara's recollection of her traumatic past is beautifully and heart-wrenching in its sincerity) and subsequently I settled into the pairing of art and story by the end of the volume.

What makes Bakemonogatari so terrific is the subtle mix of the mundane and the fantastical, with many mysteries alluded to in shadows and casual mentions, rather than the endless dramatic reveals another writer might over-indulge in. Also key to the story are the relationships developed by the protagonist and the girls he meets along the way, and if this first volume is any indication then we're in very safe hands indeed with both pacing and artistic flair.

If you are yet to set foot in NisiOisin's fertile imagination, then the manga is a good place to start. This is a titanic series that has dominated every medium it's touched, and the manga looks to continue the trend.

Sadly the manga is on hiatus in Japan due to the artist's health, which is unlikely to affect the release schedule in the West, but regardless, we hope he makes a full recovery soon.

10
A supernatural tour-de-force from one of the Japan's most imaginative writers, paired with an artist who brings visual flare and fire to the story.