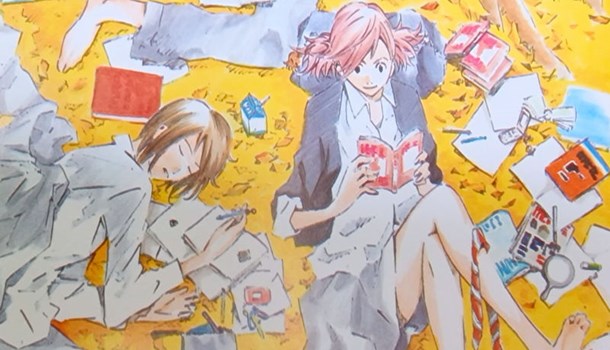 Set across four books,  A School Frozen in Time is a mystery series originally written as light novels by Mizuki Tsujimura and later adapted into a manga in 2007. Her debut work as an author, the story concerns a group of eight students who become trapped at school, unable to escape the building or communicate with the outside world. Two months earlier, a fellow student had committed suicide, and it quickly becomes clear that one of the eight students could be the victim - the only issue is, none of them can remember who killed themselves or why.

I was first attracted to the series by Naoshi Arakawa's artwork , which flirts between cute and macabre effortlessly. While the book never ventures into anything resembling cute, there's a youthful energy to the cast that really works in the book's favour. While some of the cast are notably more whacky than others, almost everyone in the first volume gets a chance to project their own unique personalities, from the shy Mitsuru, delinquent Sugawara, energetic Rika and our main protagonists; the studious Mizuki and her sensible childhood friend Takano.

By the end of volume one, the group have incurred their first loss, discovered some bloody scenes and are still at a loss as to explain the how and why of the events around them.

Like any capsule drama, the emphasis of a story in this vein is characterisation. Unless you can relate to the cast and empathise with their dire straits, it is, like our suicide victim, dead on impact. I have to say I found the opening chapters a bit of a slog in this regard, not because the characters are unlikeable, but because of the pacing. There should be a feeling of mounting dread as realisation dawns, but instead we have comical overreactions which really don't help the tone of the book in the slightest. On top of this, we have what felt like endless repetition of the characters making the same exclamations - we're trapped, I don't remember, what's going on and so forth. This makes turning multiple pages to see absolutely no progression a very tiresome experience for the reader.

I imagine this was less of an issue in the original novels, simply because there's no exaggerated artwork to undermine the situation. Thankfully, by the halfway mark, everything settles down and we start to learn more about our protagonists, and perhaps pick up some clues as to the identity of our antagonist - which at this point could be any one of them. Once the tension starts to kick in, the book starts to really come alive and the latter half of the book is full of revelations, admissions and background details that flesh out the scenario to tremendous effect.

The first arc of the story touches on themes of loneliness, introspection and self-harm, so the themes are pretty mature and the book should be approached accordingly. At only four volumes the mystery shouldn't outlast it's welcome, so I'll certainly pick up the rest. I picked the book up while browsing my local Travelling Man, so much like my Emanon review at AI, this review is a bit behind the publishing date. Hopefully it'll be useful for bibliophiles like me that like to peruse a bricks and mortar store!

8
Not without some initial pacing issues, but once it hits its stride, the tension is palpable.