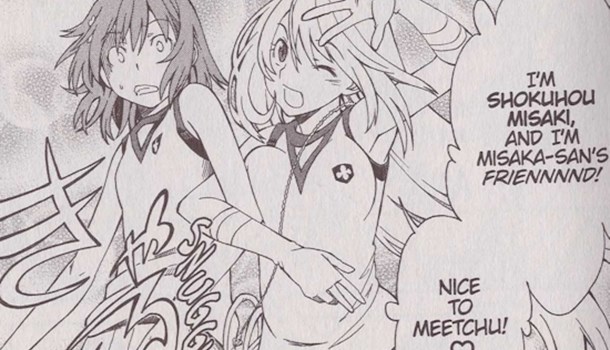 With the nefarious Sisters project wrapped up neatly with a bow on it and protagonist Mikoto Misaka's life returning to normal in its wake, what better way to celebrate that return to normality than with a good, old-fashioned school sports day?

Then again, when your entire city geared up to producing a student body effectively imbued with superpowers and making the most of those abilities, even a competitive event such as this is no trifle, meaning tight security to keep ne'er-do-wells away and the possibility that some may want to make the most of this high-profile event for their own ends.

None of this seems to be of any real concern as the event begins however, and the only real problem Misaka has is getting a clean gym kit before her next event starts. This in turn begins a chain of events that sees one of her wandering Sisters press-ganged into taking part in one particular contest, which also just so happens to be the launch pad of a malicious plan around which fellow Level 5 esper Misaki Shokuhou seems to be a major part. For once, it seems like Misaka isn't even going to be able to rely on her friends to help her out in a time of need, although that doesn't mean she's entirely alone in any regard...

As we alluded to in our review of volume seven, Railgun's Sisters arc is a truly tough act to follow, but the build-up of events in this latest volume is certainly rich with promise and also proves successful in bringing some of the lesser characters within its universe to prominence in a genuinely enjoyable way to prove that the series isn't all about Misaka at the exclusion of everyone else. It would have been so easy to cop out and turns this grandiose school sports day into a trifle, but it seems as if the series is intent upon making a serious story out of it, and thus far it's doing a fine job of producing just that.

In terms of artwork, this series continues to look great - it might not have the world's most detailed backgrounds but this is more than made up for by the care lavished upon its characters and keeping them on-model at almost all times. Alongside this, Seven Seas' presentation of the series continues to be as good as we could ask of them, with a decent translation and layout that causes no issues with readability whatsoever.

If we were feeling cynical, we could probably make a case that A Certain Scientific Railgun reached its peak at the conclusion of the Sisters arc and will probably never reach those heights again - while it's certainly true that said story arc will be tough if not impossible to top, this volume suggests that the series still has plenty of interesting tales to tell, and after an entertaining build-up to what appears to be another major tale we remain very much on-board with A Certain Scientific Railgun as one of our current favourites.

8
A new story arc begins in earnest, and it shows plenty of promise thanks to an entertaining volume that successfully brings some additional characters to the forefront of the series.