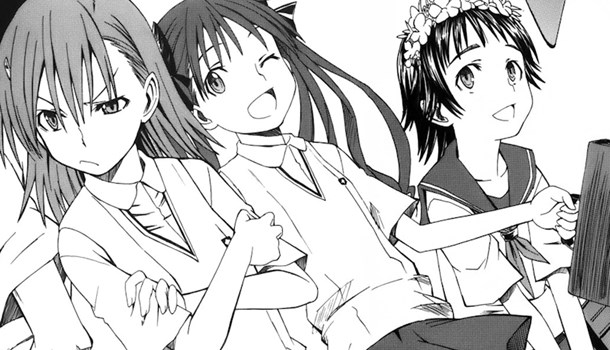 If the chances of a sequel to a popular film or book living up the expectations born from the original are slim, the possibility of a spin-off matching or surpassing the success of its inspiration is not far shy of zero.  Thus, when a spin-off of a popular franchise does somehow strike it big to the point of drawing in new fans who aren't even keen on or familiar with its derivative, it's usually well-worth sitting up and taking note.

This is most certainly true in the case of A Certain Scientific Railgun, or To Aru Kagaku no Railgun to give the manga its Japanese title.  This manga is in fact a spin-off of a series of Japanese light novels which haven't yet made it to the west called To Aru Majutsu no Index (or A Certain Magical Index) - proof in itself that interest in this spin-off has surpassed its originator, one could argue.

Of course, this makes explaining the premise of this new manga series a little tricky, so bear with me.  A Certain Scientific Railgun is primarily set in a place called Academy City - a futuristic place of learning inhabited almost entirely by students.  The students of the city aren't exactly your typical school-goers however, as Academy City specialises in educating so-called "espers"; those with various special powers which they are trained in how to tame and develop to make the most of them.  The level of power exhibited by each student is ranked all the way from a level five (an esper genius in their ability of choice) through to a level zero (no ability whatsoever).  The star of the original series, A Certain Magical Index, is one Kamijou Touma - a level zero with no official ability but a mysterious power which allows him to "block" any kind of esper (or indeed magical) power used against him using his right hand; an ability which sees him drawn into a struggle for power between the constantly duelling forces of science and religion.

In contrast, Railgun eschews any religious and magical elements entirely by shifting its focus away from Touma's plight to zoom in on the level five superstar esper of Tokiwadai Middle School, Mikoto Misaka - an expert in the use of electricity as a weapon, hence her "railgun" moniker and the title of this manga.  By turns feisty and girly, Mikoto's adventures are largely brought about on account of her pervertedly devoted room-mate Kuroko Shirai, a teleporter who is also a member of Judgement - a "police force" of sorts for Academy City manned by suitably talented students.  Throw in another Judgement member named Uiharu and her level zero friend Saten, and you have the quartet of girls that make up the mainstay of A Certain Scientific Railgun's story.

One thing that becomes immediately clear from its opening volume is that A Certain Scientific Railgun knows that its dealing with a couple of fan favourites in Mikoto and Kuroko - thus, it doesn't take long to introduce a shower scene into proceedings while the rest of the volume sees Misaka getting drenched in a fountain while Saten is introduced via an in-joke where she flips up Uiharu's skirt every time she sees her.  Admittedly, it isn't overly gratuitous or distracting, but it does feel like a craven attempt to grab attention and sell copies.

Aside from that, a quick-fire introduction to the manga's concept via an overly brief foiled bank robbery leads us into a false start of sorts before the first proper story arc of the series begins - the case of a "Graviton" bomber who is carrying out terrorist attacks across Academy City using his power.  This in itself gives way and acts as a lead into an even bigger story surrounding the illicit "levelling up" of their powers attempted by some students, to close out this opening volume on a suitably mysterious note - although not before a cameo or three from a certain Kamijou Touma, of course.

Probably the best way to describe this opening volume of A Certain Scientific Railgun is as a mixed bag - its artwork is variable in quality from expressive and passable through to a little below par, while its story is similarly disjointed (by necessity in places due to its ties to A Certain Magical Index) and variable in quality to boot from some nicely played set pieces through to scenes which feel rushed by comparison.

As a stand-alone series, this first volume of Railgun benefits from its well-realised esper-powered city setting and the way the characters within it use those powers, but shorn of the novels from which it is derived it's hard to really be drawn into its universe to the point of actually feeling anything for those characters.  Let's not be churlish about this - ignoring its official lack of availability in the west at the time of writing, you'll only get the most out of Railgun by watching the anime or reading the novels based upon A Certain Magical Index first; it's there that Misaka and Kuroko's characters are really fleshed out, and they feel somewhat empty without that additional material to benefit them.

By all means, see if you can sink yourself into the world of Misaka and company without all of that additional background, as there might just be enough to its story and concept to draw you in - personally, I'd wager it will seem a little too flimsy without it however.

7
A must read for fans familiar with the franchise this series is based upon, but possibly a tougher sell for those not familiar with Academy City and the world built up around it.