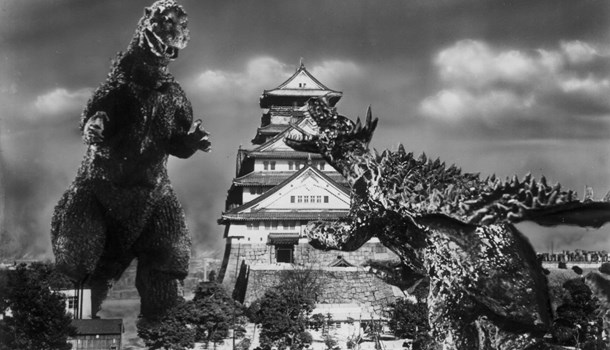 In an alternative universe in 1955 Godzilla Rides Again was released, spawning a new genre of the kaiju western. It would have been predated but only subtly by She Wore A Yellow Godzilla and also more surreally in Godzillacoach (which would later inspire Miyazaki’s catbus in My Neighbour Totoro); it would spawn the classic trilogy: A Fistful of Godzillas, For a Few Godzillas More, and The Good, The Bad and The Godzilla. Later there would be the majestic Once Upon A Time In Godzilla and finally the initially celebrated then questioned Dances with Godzillas. Finally a more revisionist film, Unforgiven Godzilla, would force Godzilla to face up to its destructive past and atone for its actions.

But in this universe, in 1955 Toho instead produced Godzilla Raids Again and the opportunity for the kaiju western was lost. (Note to producers, happy to pen a treatment for anyone looking to move on from superhero franchises – I’m full of ideas: Rio Godzilla, Ride the Godzilla Country, The Outlaw Godzilla Wales, The Godzilla Bunch – I don’t just rip off western titles, real plots here for sale, real plots.)

Fantasy aside Godzilla Raids Again is the second film in the Showa-era bookset and starts not unlike Godzilla, out at sea, only this time on a plane, where corporate pilot, Tsukioka, comes to the aid fellow flyer, Kobayashi, who has been forced to land on a small and secluded island. The rescue takes an unexpected turn as the head of Godzilla appears but not just that! Another creature lost to the ages, Anguirus (a curious mix of stegosaurus and armadillo!), attacks Godzilla before their very eyes! The city of Osaka fears for its safety as the two pilots escape and warn the authorities.

Godzilla Rides Again (henceforth GRA) is clearly a cash-in on the original and yet is not a bad film even if it illustrates the law of diminishing returns. The difference between Godzilla and GRA is immediately apparent as unlike the credits to Godzilla, GRA shouts genre movie: the three-dimensional lettering and music, in counterpoint to Godzilla’s more arresting score and traditional credits, are redolent of 50s sci-fi. This feeling was perhaps influenced by the fact that the first image is that of a pilot coming into shot as I was immediately brought to mind The Thing From Another World. Arguably this is no bad thing as The Thing From Another World is a magnificent film though here the opening doesn’t have the snappiness of Honda’s direction in Godzilla. Where Godzilla really nailed its economical and visually led introduction clearly GRA in the hands of director Motoyoshi Oda hasn’t the same confidence nor visual skill. It’s not bad, but Godzilla sets up the story beautifully and GRA feels laboured and visually a bit drab by comparison. Still for the most part it remembers something that was key to Godzilla’s success: invest as best you can in your character as how we feel about them will likely be the difference between a flop or not. Immediately the film sets up a relationship between Tsukioka and the boss’s daughter, Hidemi; and Tsukioka and his friend Kobayashi. Though unlike Godzilla the central romantic relationship ends up fairly rote, like it is there because, well, you have to have a hero with a girlfriend right? And if anything it’s Kobayashi who describes the radio women at the company, one of which is Hidemi, as nags you realise is likely the most romantic – and turns out to be.

Though where the film feels a rushed cash-in is because it struggles in terms of pacing, and plot elements that are introduced because they move things forward not because they are part of a coherent whole. I struggled to understand the purpose of the invented dinosaur, Anguirus, except as an excuse to suddenly have an elongated sequence where the two monsters fight and trash Osaka. Maybe they were already thinking of spin-offs, who knows? Disappointingly Osaka being trashed in the monster fight is where the film is at its worst. Godzilla, a bit like Mothra, is in many ways a film that works by building up to the appearance of the walking (or flying) wrecking ball of destruction: to Godzilla lumbering ashore and wreaking havoc in Tokyo. Whereas at GRA’s mid-point Godzilla reaches the mainland, chased by the aggressive Anguirus and fight to the exclusion of all else but destroy, destroy, destroy. These moments feel empty as the creative team behind the film seemed to have forgotten that this is just empty spectacle if it is not juxtaposed with the human element. Often these little vignettes throughout the destruction, like the mother shielding her children in Godzilla, are the difference between me thinking: “bloody well get on with it” or not. All this is absent; instead we have an admittedly benevolent fishing magnate at his cannery looking out at the city. What doesn’t help is the comparison with the first film, where in the original Godzilla is frequently framed in dark, menacing close up and focusses on the details of destruction in deliciously darkened hues, Godzilla itself flowing with a kind of brutal energy and covered in a sheen of oleaginous muck; GRA recaptures none of this and hasn’t really a style of its own to replace it. As Godzilla battles Anguirus it feels more like a wrestling match on amateur’s night. Gone is that glistening darkness, hello full framed monsters in bright light. That said the special effects are surprisingly effective and realistic. True, often black and white is more forgiving when it comes to the special effects of the period but as buildings are crushed, facades collapse you do at least believe that this is a real city not just a Lego construct, though the scenes lack any real emotional punch or visual impact.

Thankfully, once the Godzilla vs Anguirus stuff is over and done with the film remembers what actually matters and if anything the conclusion is far more convincing than the original Godzilla, as no pseudo-science is used – and again the film remembers its characters matter. There is also continuity between films, Godzilla is immediately recognised when Tsukioka and Kobayashi see it on the island so we recognise we’re in the same world. Dr Yamane returns though this time Takashi Shimura’s role is token (he only appears in one scene) and is less angst ridden. No longer the conscience struck palaeontologist instead his interest is in how Godzilla can be beaten. Continuity remains in other small things, which show attention to the original: Godzilla’s sensitivity to light from the first film is mooted as a countermeasure. Intriguingly there are unexpected nuances: Hidemi feeling uncomfortable and out of place wearing a polite smile of get me out of here! when Tsukioka meets old army fliers and is clearly a fifth wheel at their reunion debauch. And there is a genuinely pleasing, humane humour, with Kobayashi, shipped to Hokkaido, known as Mr Groom as he ums and ahhs over getting married for all his supposed reluctance; plus Kobayashi is played with real charm by Minoru Chiaki. The remaining cast, excepting the underused Shimura, are all also-rans, not bad but of the more functional end of the acting spectrum; though you feel sorry for Setsuko Wakayama as Hidemi as she has almost nothing to do after some initial flirty banter with Tsukioka.

If anything GRA feels like a film that has been rushed. “Get us a sequel!” some producer has screamed. Then a whole mass of professionals have struggled to pull together a film that works. And so the film does and doesn’t. Curiously the kaiju fight elements are the least effective and the story that surround it are better. The swift 80 minute running time helps as it keeps narrative padding down to a minimum but if there’s really an issue the film forgets two very important things.

King Kong focussed on excellent characters and performances, humanised everyone including Kong, and told a strong story.

Godzilla used the monster as a metaphor, tapped into the social and emotional milieu that still resonate and embraced a more sophisticated moral grey area.

GRA never manages to achieve either but it has its moments and though the expansive monster fight is the least interesting part of the film I nevertheless never wanted to turn it off as I have many other films. Ultimately GRA has one particular and insurmountable problem: the original film and films like King Kong, which truly are wonderful as films regardless of categorisation, are going to be almost impossible to top. (Actually the little seen Son of Kong is surprisingly good but like GRA never matches the original.) In the end GRA does what it needs to do and it left me feeling curiously satisfied due its unexpectedly well-honed conclusion. 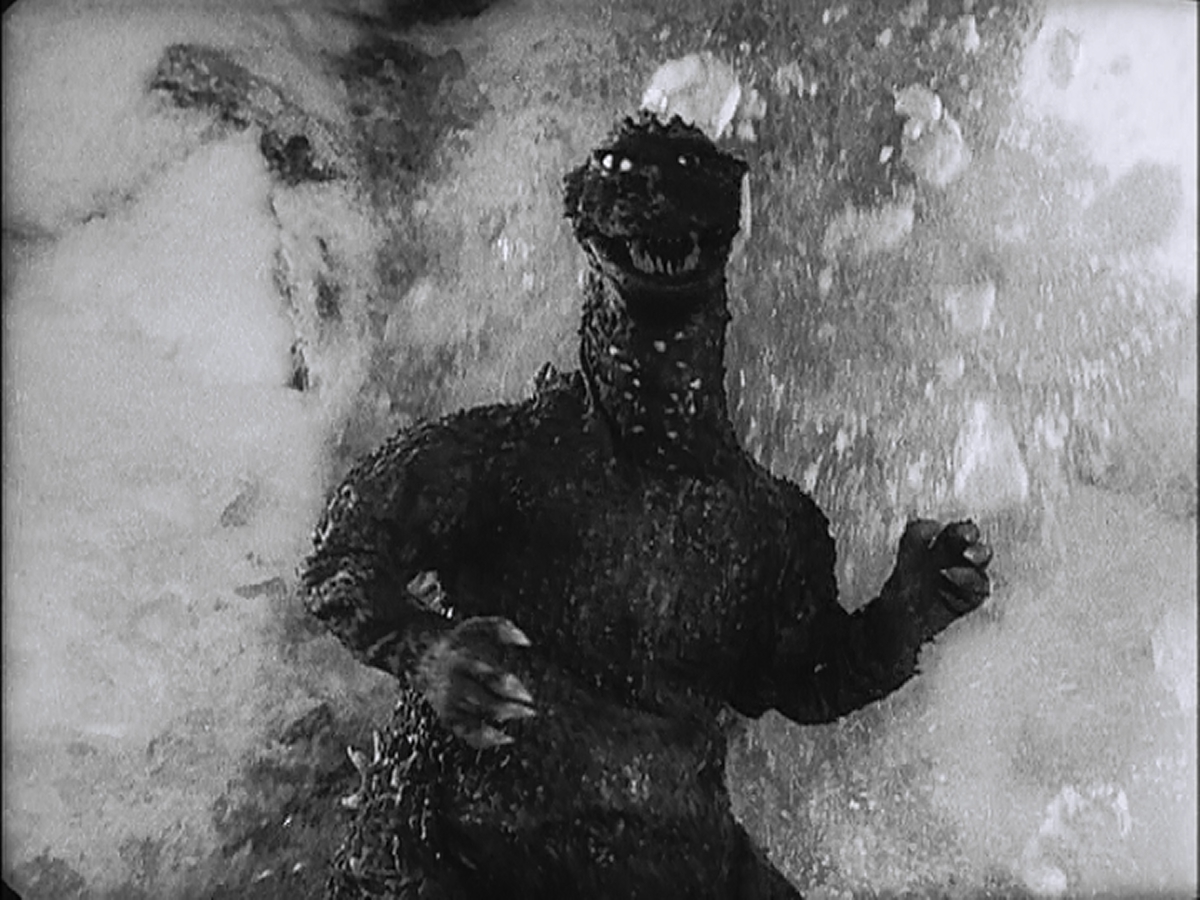 7
A solid enough follow-up, even if it proves the law of diminishing returns
LATEST REVIEWS