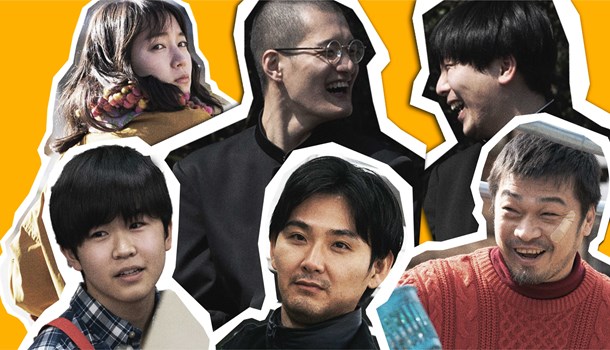 Based on the manga by Hiroyuki Ohashi, Zokki presents the viewer with a series of overlapping stories, revolving around secrets, lies, lust, abandonment and otherwise lost moments in quiet corners of Japan.

As Third Window recently released a twinset of portmanteau(ish) movies, Funky Forest and Warped Forest, comparisons between both films were rife. As comparisons go it’s pretty lazy, as Zokki has a more rounded feel, something more like a cohesive narrative going on, though often as not the stories it presents don’t overlap so much as the characters, who sometimes do no more than pass by each other, or may be neighbours who have one thing in common (even if that is loudly banging front doors). It doesn’t have the forced zaniness of Warped/Funky Forest and instead works as a gentler comedy, similar in tone with earlier Third Window releases like Satoshi Miki’s Turtles are Surprisingly Fast Swimmers (a real gem in my opinion) and Instant Swamp. It’s this gentle warmth of tone where the film is at its best because it can also go down the toilet humour route, especially in the early story of teenager, Ryoko, who has a problem with involuntary farting. These two opening gambits, the story of Ryoko and before this Kyoko, whose grandfather is insistent that one should always keep one’s secrets hidden, almost perfectly illustrates the best and the worst of Zokki; the opening scene between the grandfather and granddaughter has a quiet intimacy, whilst when in school students take the piss out of Ryoko via infantile impressions, the story then coming to a head unexpectedly. The culmination of Ryoko’s story hits the right note (I won’t spoil it) as did the intriguing and intimate opening. However, the teenage toilet humour felt like a bit of a lazy bore.

The subsequent stories meet with various levels of success; much of the problem here is that, because the film tries to talk to moments in life, it means that some of the characters have little space to be examined in any detail and so it can  be hard for the audience to become invested in them. The observations Zokki offers have to be sharp and, let’s face it, few directors really have that level of Robert Altmanesque skill to pull it off.The disc contains an interview with the three directors (and actors, though not in this film) Takumi Saitoh, Naoto Takenaka, Takayuki Yamada, where one of them states that the film is more profound for the small details it presents that would not be possible in a more overarching narrative. I would disagree and suspect it may be true of the source manga. Many of the stories do present nicely detailed moments, but nothing that wouldn’t also work in a more cohesively narrative film.  Admittedly, considering the film has three directors, it never feels awkward or like it has been spliced together from disparate styles and sources.

This brings us to the stories which can, as you might expect, feel quite under-baked. Examples of this would be the father and son invading school grounds to discover other ghoulish incursions, or the video store workers, which contains some nice visuals which suggest the "everydayness" of life but felt like padding; unlike the stronger stories Zokki tells, where either the narrative has robustness, the characters depth or the detail has a more strongly underlying warmth to it. 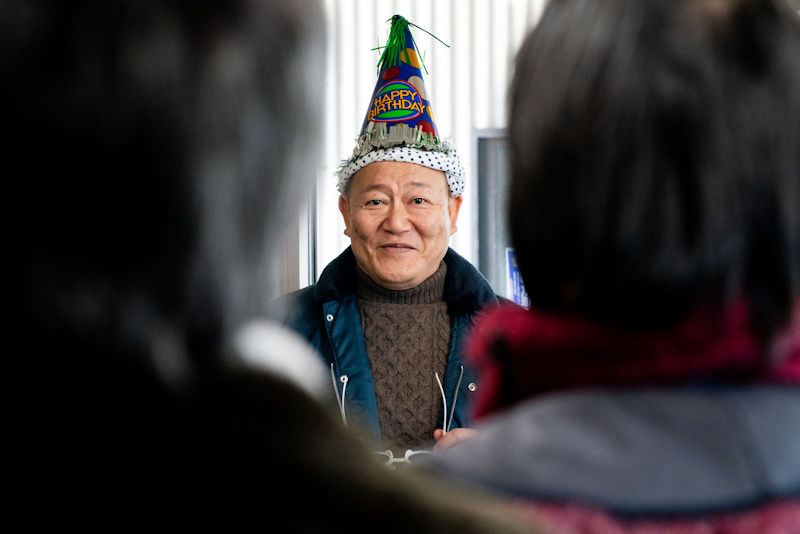 Happiness lies in a birthday hat

Zokki works best in such stories as the cyclist Fujimora, who is totally not on a voyage of self-discovery at all, with only a sleeping bag and a porn mag in his possession. His fleeting meetings with both fellow travellers and finally finding himself invited to an older man’s impromptu birthday party has the detail of character through smaller actions that invite the audience to really engage with his story. It illustrates an alternative way of living which includes casually inviting strangers in (and those that are lost and returning) that potentially has the power to change them. It's all well filmed and told organically. Fujimora, admittedly, never really exists much as a character, but his main scene when invited to the party captures again the best of the film and illustrates a warm-melancholy that is genuinely heart-warming in the best possible sense.

Equally, the friendship between misfit wrestling fanatic teenagers, Makita and Ban, with the latter being infatuated with the former's sister, leads into another strong story where the filmmakers allow the characters to develop into rounded figures which grants the story story more emotional resonance, in part because it wrongfooted me a little with where I thought the friendship may go.

Unfortunately, some of what then wraps around these stories feels less compelling, and because of this there were times as the film reached the end of its nearly two-hour long running time where I switched off a bit, as the padding stories felt strained with the humour once more dipping into the toilet variety. It's a shame, because with some narrative tightening and more space to develop the characters, it could have resulted in a much stronger overall film. Yes, it has some nicely observed and judged moments that are, in some instances, surprising.  But more often these moments are warmly humane, but nothing exists in Zokki that wouldn’t work in a more rounded narrative. Fujimora’s tale, for instance, reminded me a little of the protagonists in Shohei Imamura’s final film, Warm Water Under a Red Bridge, but whereas Imamura’s film really strikes a deeper chord as it explores its characters and humanity, Zokki just never has the time to do it. How much of this comes from the source material I don't know. I can see how the manga would need to move in a fleetfooted manner that captures the essence of each story, but film being a different medium, it needs to find its own suitable way to tell its stories and flesh out its characters. Zokki never quite nails this.

Still, on-screen it feels like the work of a single cohesive vision, even if it is not spectacular to look at. Arguably much of the visual interest comes from being shown around those somewhat more unseen corners of small-town Japan, the rundown offices and one-room apartments with paper thin walls have their own allure, even if the end result is not a sublime cinematic vision.

Ultimately Zokki is a solid film built up on some nicely observed and very humane moments, but without the wheels or room necessary to really fully engage as a film should.