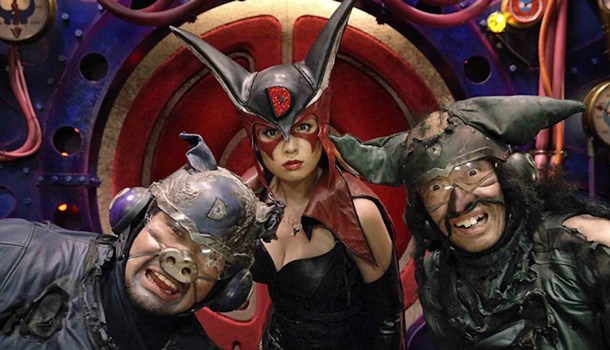 One could never accuse Takashi Miike of being a one trick pony or having essentially made the same film over and over again. Though he may be best known to British audiences for his ultra-violent crime thrillers like Ichi the Killer or Shinjuku Triad Society, he’s also equally at home with comic horror musicals, J-Horror and more recently mainstream samurai films. It comes then as both a surprise and no surprise at all that the most recent of his films to make it to UK shores is an adaptation of much loved 1970s anime Yatterman.

By day Gan runs his father’s toy shop with the help of his girlfriend Ai, but "every Saturday night at 6.30pm" they transform into crime fighting duo Yatterman. With the help of their trusty mecha, they build seek to protect the planet from the nefarious schemes of the Doronbo gang. Led by Doronjo, a vampish villainess, the Doronbo gang engage in various off-the-wall enterprises whilst the two lackeys Boyacky and Tonzra try and come up with mecha impressive enough to (they hope) finally defeat Yatterman. In this particular instalment, the Doronbo gang have set their sites on obtaining the four pieces of the Skull Stone - an ancient artefact that will grant them their ultimate wish! Can Yatterman, aided by giant robot dog Yatterwoof and their pet robot Toybotty, prevent the stone falling into the wrong hands?

Make no mistake, this is a film for the child in all of us. From the outset Miike has tried to place us in a thoroughly cartoonish universe where everything is super cute - even the mechas are really just giant toys or repurposed household items. The CGI that’s been used to create the robots and strangely cute environment is excellent, and even has a quirky retro charm very reminiscent of 70 and 80s stop motion animation. Seeing as we’re in a cartoon world, there’s also plenty of cartoon physics where our heroes and villains prove seemingly indestructible and ready to fight on another day despite having been blown up or crushed under a huge falling object.

In keeping with the colourful Saturday morning antics, Miike has also succeeded in fitting in some songs and, much as he did with Happiness of the Katakuris, manages to make them both sweetly endearing and deliciously subversive. Fans of the anime will be thrilled to see the Doronbo song has made it over, complete with suitably odd choreography. If you’re the sort of person that shudders at the thought of singing, even in a cartoon, I defy you not to be at least mildly amused by the Doronbo gang’s attempt at a personal manifesto set to music.

The whole thing is very ridiculous indeed; there wouldn’t be any point trying to pretend Yatterman has anything to offer than hugely over the top fun but that’s by no means a bad thing. What it sets out to do - recreate the feeling of a late 1970s kids cartoon but for the adults the original audience have become - it does superbly. It’s not really necessary to be familiar with the cartoon in order to enjoy the film as it does a good job of explaining itself from the outset (often with cool retro screen graphics like animated cutaways and an omniscient narrator) - however, its sugary, bubbly cuteness might end up making some viewers feel as if they’ve eaten too many Smarties and entered a kind of hyperglycaemic daze. The sheer relentlessness of its cutesy absurdity is not going to be to everyone’s taste but the good news is that it’s fairly unlikely most people would make it through more than a few minutes before realising Yatterman is a bit more than they can take.

For those who can appreciate its particular brand of humour, Yatterman is a uniquely crazy thrill ride through the mind of a director more usually known for bashing skulls rather than setting off on a quest to put one back together. It may be slightly repetitive in places and it does run out of steam towards the end of its almost two hour running time, but Yatterman is almost guaranteed to put a massive smile on your face. If you aren’t striking the victory pose and shouting 'Yatta!' along with our heroes by the end perhaps you ought to apply to join the Doronbo gang.

8
Great big, stupid fun; probably too much so for some people's taste.
LATEST REVIEWS