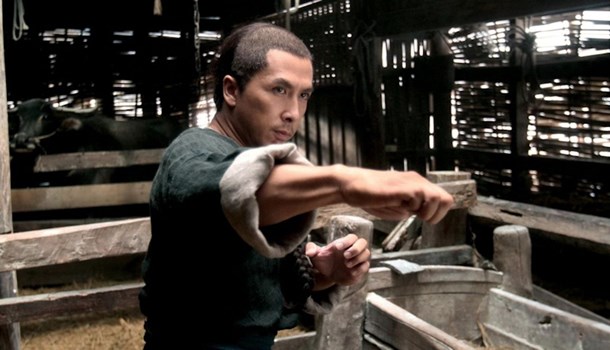 Surprisingly, considering how well it played in international festivals a few years ago, Peter Chan’s Wu Xia has had something of a difficult time travelling into English speaking territories. Quickly picked up by the Weinsteins (presumably because of its Crouching Tiger, Hidden Dragon like box office appeal) the film was then confusingly given two separate English language titles - ‘Dragon’ and ‘Swordsmen’; neither of which it has to be said is very appropriate, though the latter is less offensive than the former. Admittedly the version screened at Cannes was not regarded as final by the director, but as usual the Weinsteins had their own meddling to do and to cut a long story short the film has yet yet to receive major release either in the US or UK. Thankfully though, following its premiere screening at the Edinburgh International Film Festival, the HK 15 Film Festival organised by Terracotta Distribution and the Hong Kong Economic Trade Office have provided London based cinephiles a fantastic opportunity to see this much anticipated film from the director of The Warlords and the stars of Ip Man and House of Flying Daggers.

Liu Jinxi (Donnie Yen) enjoys living a simple country life as a paper maker in a small Chinese village in 1917 - he has a loving wife and two sons (one his own and the elder a step-son). Although he wasn’t born in the village and you might expect there to be some suspicion or hostility towards him, the villagers admire his quiet ways and compassionate nature and so haven taken him in as one of their own. All that is about to change however, as two notorious criminals arrive in the village and attempt to rob the shop Jinxi is working in at the time. Despite his better instincts, Jinxi has no option but to defend himself and eventually dispatches both bandits, earning the gratitude and respect of the entire town.

However, Xu Baijiu (Takeshi Kaneshiro), a detective with an eye for the minutest details and a fondness for the letter of the law is immediately suspicious of how a simple paper manufacturing country villager could singlehandedly take out two dangerous outlaws that have escaped the clutches of the police force on numerous occasions. On examining the bodies and coming to the conclusion that some serious martial arts skills are the only solution, and on examining Jinxi and noticing a huge qi force emanating from him, he can’t get the thought that there’s more to Jinxi than meets the eye out of his head. The meeting of these two men is one that will change both their lives forever (not to mention numerous others); is Jinxi really who he claims to be? If not, can a man ever really cast off his past - does he deserve the opportunity to live another, better life that eclipses whatever terrible things he might have done in the old one?

The first thing to say is that the film’s original title Wu Xia is at once very apt and more than a little deceptive. In essence, a ‘wuxia’ film is one which deals with the ideals of honour - the laws of ‘chivalry’ that define the true Chinese martial hero - however, in common parlance we use the term to describe a film which deals with these themes in terms of noble swordplay. Wu Xia absolutely deals with these themes - honour, redemption, justice, the protection of the poor and defenseless; however, it’s actually very light on actual fighting. Though it does have a number of excellently choreographed and brilliantly filmed set pieces (such as the extended sequence with the bandits), fans of the wuxia and martial arts genres may well be disappointed with the action content. At heart the film might more accurately be described as a procedural or detective story with several well plotted twists along the way.

Xu Baijiu (in a fantastic performance from Kaneshiro) is indeed an eccentric and, in fact, troubled detective with a deduction style that’s both straight of out Sherlock Holmes and also very twenty-first century with its emphasis on forensic techniques and reconstructions, not to mention a thorough grasp of anatomy. He also seems to have a fondness for acupuncture and an ever present alter ego as a sort of permanent reminder of the pain he’s inflicting on himself in an attempt to atone for personal guilt (he believes) caused by his own capacity for empathy. Yet it’s obvious that behind all the priggishness there was once a fine man and it is this sympathy for him that we also share with Jinxi that allows us to bond so totally with both men, becoming completely engaged with their rather complicated relationship.

For fans of wuxia genre films who might want more actual fighting and less emphasis on a tightly wound plot, Wu Xia may prove disappointing. However, Peter Chan’s film is certainly one of the more interesting experiments to come out of China in the last few years and has enough ‘wow’ moments to give Crouching Tiger a run for its money. It’s certainly wonderfully shot with some gorgeous cinematography and truly exciting set pieces. The film also boasts cameos from the likes of Jimmy Wang Yu (One Armed Swordsman homages abound) and Kara Hui, who bring an obvious pedigree from the genre's roots. Peter Chan’s Wu Xia is obviously not without its faults but is an absolute must see for fans of Chinese cinema.

Wu Xia screened in London as part of the HK15 Festival running at the Odeon Covent Garden until 14th July 2012. For further news of Wu Xia in the UK, please make sure to keep an eye on Metrodome Distribution

9
A very inventive and original take on the themes of the classic wuxia movie allied with the modern detective thriller, this is an absolute must-see.
LATEST REVIEWS