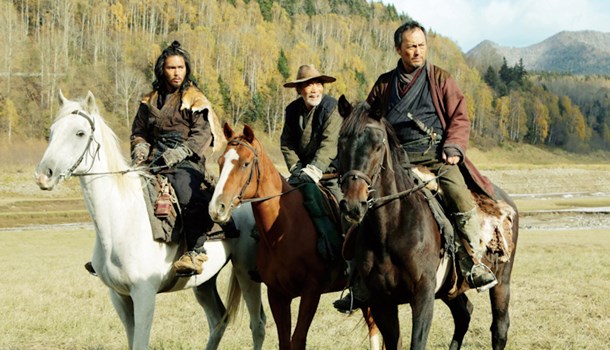 There’s long been a fairly unsuccessful tradition of taking the popular Asian film of the day and ‘remaking’ it in English for a perceived audience that is wary of ‘foreign films’. Most of these paled in comparison to their original counterparts and what often resulted was a dull muddle, stripped of everything that made the original film so interesting that it attracted the eyes of gold digging producers in the first place. However, the fact that hardly any of these efforts were successful never stopped Hollywood trying and sadly it doesn’t seem that it ever will. Now, in an bold bid for cinematic vengeance, Japan has chosen to remake a Hollywood modern classic - Clint Eastwood’s Unforgiven. The film that is credited with revitalising and re-examining the Western is now itself remade as an examination of the Samurai genre and the expansionist history of the early Meiji era.

Jubei is a farmer, the father of two children and a widower. In his youth he was a fearsome soldier - one of the Shogun’s elite warriors until history turned against him and saw Imperial troops hunting him down. They called him “Jubei the killer” and his blood soaked exploits made him a much feared spectre to his enemies. Now though, the love of a good woman has cured him of his drunken rage and he wants nothing more than a peaceful life raising his children on the land. However, the climate is harsh and farm work is hard for a lone small holder in hostile terrain. When an old friend turns up and suggests they go after a lucrative bounty Jubei refuses but, fearing for the future of his children, he eventually gives in. A prostitute has been badly slashed about the face by a violent (samurai) client and the police won’t do anything about it so the prostitutes have engaged Jubei’s friend for a more primal sort of vengeance. However, things are rarely as simple as they sound and when you try to buy a better life through the taking of someone else’s can you really expect to prosper in the long run?

For the most part, Lee Sang-il’s Unforgiven follow’s the plot of Eastwood’s film almost identically, though some character details and plot devices have been switched around. The themes of the futility of vengeance and the legacy of violence are still the most prominent aspects, although they seem to actually run a little deeper than in the original film. Without spoiling the ending (which is more than a little different to Eastwood’s) Jubei is truly unforgiven in the sense that he is unable to forgive himself for his past sins and becomes truly a man apart. Whereas Eastwood's protagonist completed his last act of violence and went back to a seemingly peaceful life, Jubei’s is still unquiet and seems likely to remain so. In this film, the violent element exiles itself and cannot be allowed to rejoin society. However much you may try to forget the past, the past will never forget you as one character puts it. There are some things which can never be forgiven, by the victim, by society and ultimately by the perpetrator himself.

In setting the story in 1880, Lee has both found a close equivalent for the American ‘West’ and a convenient point from which to examine the post Meiji Restoration Japan. The world Jubei’s children have been born into is so vastly different from the world he was born into that it’s almost inconceivable. Centuries of isolation were eventually broken by Commander Perry’s intervention which exposed Japan as nation still living by rules that had died out centuries earlier in other developed nations. However, what it also exposed was fear - fear of the outsider and the threat of colonisation. There were those wished to go back to before and feared foreign customs swamping their traditions and then there were those that actively sort to bring those modern technologies to Japan. Swords lost out to guns, the day of the samurai was over.

As Japan pushed northwards, as the colonists in America had pushed west, they too encountered strange and indigenous people already occupying the land they sought to possess. Like the native Americans these people were also thought less than human and their cultures and languages were ruthlessly suppressed. Where Eastwood’s film only touched on Native American issues, Lee brings the Ainu centre stage. Jubei’s wife was Ainu, his two children are half Ainu too yet they don’t speak the language or understand the customs. The third member of Jubei’s posse is also an Ainu but hides his heritage and pretends to be Japanese. In the course of their journey, our ‘heroes’ come across an Ainu village which is being raided by militia wanting to know why they burned one of their own huts down (it’s an Ainu custom to burn a dead woman’s house so she can take it with her). Either not understanding their Japanese or just unwilling to engage, the village people don’t reply, further angering the militia. Spotting the large hooped earrings a proud young Ainu man is wearing, the soldier goes crazy and orders him to take them off but he won’t. Eventually the officer orders two others to restrain the Ainu while he tears the earrings out.

In some senses Lee’s Unforgiven can’t compete with Eastwood’s as it necessarily doesn’t carry all the baggage that comes with such a heavy cinematic history. William Munny was never just a character in story, he was all the characters Eastwood ever played in every story over forty years of cinema and Unforgiven was never just ‘a western’ - it was a culmination of every western that had come before it from Ford to Leone and Eastwood himself. Lee’s Unforgiven isn’t really trying to be any of these things so much as a sharp examination of society and violence against the backdrop of a rapidly changing society. Ken Watanabe gives a fantastic performance as a man who’s seen too much and lived too much and is in some senses undone by his own re-awakened morality. If there’s a criticism to be made it’s perhaps that the prostitutes themselves have been marginalised and other than a brief allusion to their being treated and regarded as cattle and being sick of being ‘unpersoned’, not very much is made of their plight and their situation is left unresolved at the end of the story. Lee has made a beautiful film full of expansive snow covered vistas and the harsh emptiness of untamed nature. Perhaps in some areas it may have benefitted from straying further from its source material but Unforgiven is a remake done right in that has very definite things of its own that it wishes to say with this story and it says them without apology. Unforgiven is a fine film in its own right and deserves to be judged without prejudice and on its own merits and is worthy of praise on all counts.

Unforgiven was screened as the opening night gala of the Pan-Asia Film Festival at London's ICA on 26th February 2014. It will be released at selected cinemas nationwide on February 28th 2014.

9
A remake made for all the right reasons, this is an excellent film in its own right. Filled with the most beautiful cinematography, it attacks its themes with fearless gusto and is immensely entertaining in the process.
LATEST REVIEWS
Daimajin Collection