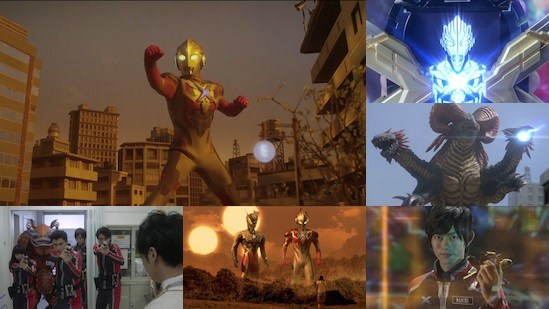 Even if you’ve never seen the show, chances are you’ve heard of Ultraman in some shape or from. As Japan’s leading superhero (or superheroes, since each series introduces a new version) since his debut back in 1966, Ultraman has been parodied and homaged in everything from Pokemon to The Simpsons. But while other “tokusatsu” (meaning live-action special effects) heroes such as Super Sentai have become more widely known through adapted shows such as Power Rangers, Ultraman is much less of a household name in the Western world. However, recently Crunchyroll have sought to educate users in the ways of the silver-skinned, monster-battling hero, adding a selection of shows from the franchise’s 50 year back catalogue to their library. So when it was announced that a new series - Ultraman X, would be starting in 2015, many fans hoped that it would also be in Crunchyroll’s sights. Few would have expected it, but they delivered - making Ultraman X one of, if not the, first simulcast superhero tokusatsu programmes in the world. Take that Power Rangers.

Fifteen years ago Earth was victim to a massive solar flare known as the Ultra Flare, causing mysterious artefacts known as Spark Dolls to transform into giant monsters. To combat this new threat, a research and attack team known as Xio was formed. Among their ranks is 20 year-old Daichi Oozora, a researcher who lost his parents during the Ultra Flare incident. When Daichi is caught in the middle of a monster attack, he is saved by a mysterious light. This light identifies itself as Ultraman X, and invites Daichi to bond with him to give the hero physical form to fight against the monsters. Accepting, Daichi secretly becomes Earth’s newest giant protector and agrees to assist the Ultra hero in regaining his physical form.

All Japanese superhero shows usually have the very basic plot of “superhero fights monster”, but just how they go about it is what sets them apart. While rivals Kamen Rider and Super Sentai have always featured human-sized characters and monsters capable of speech etc, Ultraman sees the titular hero grow to giant size to face off against alien monsters more of the Godzilla variety (although some are capable of holding a conversation). All Ultraman shows also feature the titular hero bonding with a human character in order to gain a physical form, though naturally the reasons behind this vary series to series. So while Ultraman X isn’t too original in its set up, it uses a concept that has served the franchise well for the last 50 years and is easy enough for newcomers to get to grips with.

What really sets Ultraman X apart from its peers though is its fantastic use of miniatures. All of the fight sequences have been shot on incredibly detailed cityscapes that the suit actors can tower over and run amok in. It’s so impressive that it almost hurt to see all these wonderful crafted buildings flattened, smashed and even occasionally blown up. But that’s the charm of the tokusatsu medium – the dedication put into creating such wonderful physical props and suits even though they’re going to take one hell of a beating. It has a real sense of nostalgia to it even if you weren’t someone who grew up with these kind of shows (or their American-adapted cousins). The suits themselves also offer an interesting mix of both old and new, with most of the returning monsters from the Ultra franchise having little to no updating. It does result in X facing off against some rather goofy looking adversaries, but makes it all the more impressive when a brand new monster does show up sporting the latest in costume design techniques.

Men in rubber suits brawling isn’t the only thing Ultraman X does particularly well though - it’s also made excellent use of its supporting cast. It would be easy to put the focus squarely on Daichi/X and have the rest of Xio running around in the background, but so far they’ve proven to be almost as valuable to the fight as the big guy himself. Daichi and X are already bringing a good partnership element to the show, but having times where they need to be saved by Xio make sure the human aspect of the show always stays relevant. They may look a bit silly driving around in modified cars that can combine into futuristic fighter jets, but you have to admire their perseverance.

However the biggest obstacle for newcomers to get past is going to be the product placement. Shows like these have always had an element of toy selling to them (with all three sharing close links with Bandai), but in more recent years its become more and more blatant as the shows increasingly rely on gimmicks and new products. The main offenders here are the Spark Dolls – they’re vinyl toys, pure and simple. Even the name doesn’t leave too much to imagination, but sometimes it can be hard to watch a group of people standing around talking so seriously about toys (interestingly this isn’t the first time Spark Dolls have appeared in Ultraman – making their debut in Ultraman Ginga back in 2013). The other side of the marketing comes from X himself, who draws his various armours and power-ups from trading cards. This element is incorporated into the show a lot better than the Spark Dolls, since the plots tend to be a lot more visually reliant on it. It’s hard to find constant new powers tiresome when the show does such a great job of making them look good every week.

Ultimately, a show so loyal to one of Japan’s most meticulous filming methods isn’t going to be to everyone’s tastes. But the level of craftsmanship Tsuburuya Productions have taken is worth the watch alone. Featuring a great ensemble of characters and superb rubber-suited monster fun, Ultraman X is likely to appease longstanding fans of the franchise as well as entice newcomers to check out some of the older entries Crunchyroll have added to their back catalogue – especially since the show has also promised cameo appearances from many previous Ultra heroes. On one hand the product placement might end up hindering your enjoyment of the series, but on the other there’s every possibility you could suddenly find yourself with a shopping cart full of Ultraman products.

You can currently watch Ultraman X in streaming form on Crunchyroll.

7
A worthy, albeit market-driven, addition to Japan’s iconic franchise.